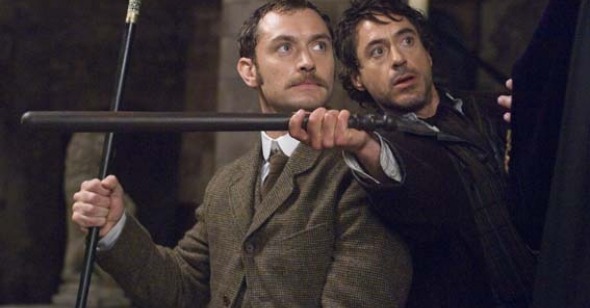 The Man and the Machine
by Samuel B. Prime

If to be human is to err, then the Sherlock Holmes of Guy Ritchie‚Äôs bumbling, limply cartoonish updating of Sir Arthur Conan Doyle‚Äôs classic literary ing√©nue, played by Robert Downey Jr., is not human. An audience seeks to identify with a protagonist by sharing in his or her mistakes. What‚Äôs missing in Sherlock Holmes, and in Holmes himself, is the element of human struggle.

Ritchie‚Äôs Sherlock Holmes is a blockbusterized reinterpretation in which the power of deduction has been replaced by superhuman intellectual prowess. In Doyle‚Äôs stories we witness a Holmes who‚Äôs arrived at his station in life after many trials and tribulations; Ritchie, however, presents us with a man who, instead of having found his calling, is his calling in life. In the stories, the author occasionally foregrounds Holmes‚Äôs faults (a fondness for tobacco, his occasional sampling of morphine in between cases), and Doyle purposefully measures a degree of doubt as to whether Holmes will eventually crack the case. After all, a reader‚Äôs devotion is dependent on the game actually being afoot.

In Ritchie‚Äôs Sherlock Holmes the game is not afoot. Rather than a man who must fall back on his accumulated knowledge and experience, Holmes functions as a case-solving robot; his infallibility sucks the thrill out any potentially compelling scenario. And this, my dear Watson, is the film‚Äôs fatal flaw. The story itself is simple enough. A serial killer and practitioner of the black arts, Lord Blackwood (Mark Strong), is captured by Holmes and Watson and hanged in public view before mysteriously returning from the dead to torment all of England. Holmes‚Äôs love interest, a conniving thief named Irene Adler (Rachel McAdams), shows up on the scene and hires him to solve the case of a missing man. Inevitably, there‚Äôs more than meets the eye here‚ÄĒand thus begins a fairly linear game of intrigue. However, Ritchie‚Äôs Holmes has the power to see into the future and thus the ability to plan out an event step by methodological step before it occurs. Ritchie presents Holmes‚Äôs powers to his audience via shamelessly Matrix- or 300-like slow-motion effects (vaguely reminiscent also of snapshot-like graphic novel panels), in which Downey‚Äôs Holmes narrates all the typically violent actions he is about to perform (this recalls the drone of Harrison Ford‚Äôs own narration in an early, now obsolete, edition of Blade Runner).

Such narration serves as a crutch for a director straining to trade style for substance. The result of Ritchie telling the audience exactly what‚Äôs about to happen‚ÄĒbefore showing it identically reproduced in light-speed Holmesvision‚ÄĒis boredom. Dr. John Watson himself (Jude Law) makes a claim about Holmes‚Äôs lack of humanness in one of the film‚Äôs earlier scenes, when the detective duo wind up in prison. Watson‚Äôs closing line to his bickering with Holmes ends, ‚ÄúYou‚Äôre not human,‚ÄĚ which wins him the argument. Holmes has no room to disagree. As soon as Holmes is given the ability to know before he knows, what worth is there in seeing the picture through until the end?

Consider for a moment the appeal of Iron Man‚Äôs Tony Stark in direct contrast to Downey‚Äôs eponymous role in Sherlock Holmes. Based on a comic book, Favreau‚Äôs film had full license to depart into the realm of fantasy, but the director instead chose to ground his film in reality. Downey‚Äôs first appearance in the film shows him among American soldiers in a Hummer, donning an Armani suit next to their camouflage uniforms and cradling a glass of scotch in his left hand. Moments later, when the Hummer leading the convoy is obliterated by weapons produced by Stark‚Äôs own corporation and Stark himself is badly wounded, Favreau immediately airs out all of Stark‚Äôs dirty laundry, making it a film less about superheroic feats than about a man‚Äôs attempt to rebuild his life and his image. Downey‚Äôs character in Iron Man has nowhere to go but up. In contrast, Downey‚Äôs Holmes never once relinquishes his throne. Holmes is so self-consciously aware of establishing his own legend as he‚Äôs living it that there is no growth, only perfection ad nauseam.

Putting aside considerations of the human and heroic, Sherlock Holmes is on all accounts a mediocre action film, one that at times perplexingly segues into sophomoric comedy (there is at least one fart joke, in which the stink released by a pug-nosed dog is mistaken to come from McAdams‚Äôs character). Generically confused, Sherlock Holmes has its priorities misaligned all over the board. And while adaptations of timeless works naturally come with centuries of expectations, what‚Äôs necessary for a reworking such as this to function is a director to frame the story singularly to his or her aesthetic style. (And in even the truest examples of a clearly articulated point of view‚ÄĒBaz Luhrmann‚Äôs Romeo + Juliet comes to mind‚ÄĒquality is still not ensured.) In the case of Holmes, none of the ways Ritchie frames his story resemble anything in his previous work. The fact that this film has already recouped what it cost ensures that we have more to see from Guy Ritchie in the future; what it will be (perhaps a sequel to Sherlock Holmes‚ÄĒlikely already in the works) remains to be seen. Case closed.