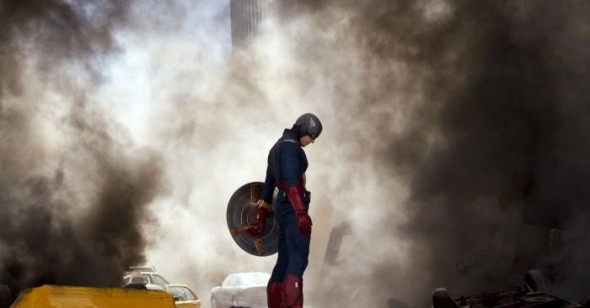 Monday Hangover:
The Avengers
By Adam Nayman and Eric Hynes

It‚Äôs been a busy spring for Joss Whedon, what with the much-delayed release of his prescription for the modern horror film, The Cabin in the Woods (physician, get over thyself), and the much-hyped unveiling of the biggest (as in most expensive) cross-promotional multiplex gimmick in history with The Avengers. The sudden mass-cultural centrality of this script-doctor turned jack-of-all-genres‚ÄĒwhose stated goal, as per a recent interview with indieWIRE, is to make things that are ‚Äúsmall, pure and odd‚ÄĚ‚ÄĒsurely signifies something. Is it the already digested lesson that often it‚Äôs the agile cruiser-weights (Raimi, Nolan) who are able to best maneuver themselves into winning positions? Or maybe it‚Äôs something more. The fact that Whedon, whose career had previously been distinguished by fluky niche hits (Buffy the Vampire Slayer) and fondly lamented flops (Firefly, Dollhouse) was handed the keys to the Marvel kingdom is at once palpably odd and faintly inevitable‚ÄĒa Revenge of the Nerd scenario to rival Bruce Banner‚Äôs proportion-warping transformations into the Incredible Hulk.

And, as played by Mark Ruffalo, Banner/Hulk makes for a pretty good authorial surrogate for Whedon: a smart, self-aware guy who fears the consequences of losing his identity in one of his gamma-irradiated rages. That‚Äôs my best stab at finding‚ÄĒand hopefully not completely imposing‚ÄĒsome sort of interesting ‚Äúmeaning‚ÄĚ in this lightly enjoyable and brightly anodyne movie, whose virtues clearly illustrate the differences between engineering and inspiration. Whedon‚Äôs script adroitly knots the ends of a half-dozen Marvel Universe movies (the Iron Man and Hulk diptychs, Thor and Captain America), finding adequate screen time for each of their above-the-title superhero personages and other back-story-heavy players (no, I‚Äôm not going to list them off, for that you can consult literally every other arts section or website review in the world). At all times, the director manages the nifty trick of honoring his affection for these familiar-to-millions characters while slyly undermining their inflated status‚ÄĒthe half-reverent mode that‚Äôs gained traction at roughly the same rate as Whedon himself.

In short, he brings it off, with a couple of flourishes (a night-hued pregame brawl between Thor, Iron Man, and Captain America has the goofy joy of a kid slamming his action figures together) and with enough space for the actors to breathe. (I was most impressed with Tom Hiddleston‚Äôs sulky Loki, who didn‚Äôt really register in Thor but benefits here from Whedon‚Äôs skill at writing grandiosely petulant villainous dialogue). But as impressively stage-managed as the film is, it never gets truly thrilling. There‚Äôs nothing in the climactic siege of New York City, with its collection of levitating heroes and canon-fodder alien villains, as effective‚ÄĒas truly, startlingly original‚ÄĒas the airborne Jackass‚Äďesque stunts in Josh Trank‚Äôs Chronicle, a comparatively microbudgeted B-movie that was, if nothing, else smaller, purer, and odder than this big, slick, and ultimately industry-standard item. ‚ÄĒAN

I haven‚Äôt seen Chronicle, but given my preference for things smaller, purer, and odder, I imagine we‚Äôd be in agreement about the airborne action, Adam. That said, I found myself strangely invested in The Avengers‚Äô climactic scene, which played very much as scenes in my childhood imagination‚ÄĒwith, as you say, plastic action figures slamming together, mouth machine guns firing, and erector-set Empire State Buildings teetering in the balance. Whedon‚Äôs greatest trick is to make hegemonic corporate product feel like populist wish fulfillment, and without the bloodlessly cynical pandering that normally accompanies such sleight-of-hand. With character depth an impossibility given the crowd of Marvel properties assembled, we‚Äôre free to enjoy the superheroes at their most enjoyable‚ÄĒas shorthand conduits for our presexual fantasies (leather jumpsuited Scarlett Johansson notwithstanding). There are intimations of more, particularly with Robert Downey Jr.‚Äôs Tony Stark‚ÄĒsince we‚Äôre two films deep into that franchise, there‚Äôs backstory to quickly reference without having to explicate‚ÄĒbut whenever action arises we‚Äôre left with only the essentials: the smart-aleck genius in the impermeable suit, the do-gooder vanilla dreamboat soldier, the linguistically archaic demigod with the blonde locks and impossibly heavy hammer. After two aborted attempts to launch the franchise, the Hulk finally works as a big-screen phenomenon because he‚Äôs freed of semi-literary pathos and adult over-thinking‚ÄĒhe‚Äôs simply a scientist who gets super angry, goes green, and smashes buildings to bits. When the Hulk slammed Loki around like a rag doll in the climactic scene, the audience with whom I saw the film exploded as if Luke had just detonated the Death Star, or as if Borat had prat-fallen in the confederate antique shop.

Loki may not have registered for you in Thor, Adam, but he was
the only thing that had registered for me. Above-mentioned adolescent fun aside, he‚Äôs the best thing about The Avengers as well. Has an actor ever been made to look this ridiculous while commanding the screen this completely? David Warner‚Äôs similarly antler-headed, otherworldly creep in Tron is the only comparable thing that comes to mind. In a film comprised of hyper-masculine standoffs and roller-coaster CGI set pieces, it‚Äôs Hiddleston‚Äôs baby blue eye rolls, Cheshire grins, and dandyish vocal modulations that made the strongest impression on me. I‚Äôm sure all those slumming, well-compensated thespians had a blast on set, but he‚Äôs the only one who seems to be having fun with us as well.

Which speaks to how bizarrely unworldly The Avengers is. Superhero narratives historically depend upon the tension between the human and the superhuman‚ÄĒwe can relate and we can‚Äôt, they‚Äôre one of us and they‚Äôre not‚ÄĒbut this film quite literally takes place in the clouds, in a flying aircraft carrier that floats high above the world and its common concerns (even in the NYC finale, citizens are merely extras), with impossibly powered heroes doing impossible things to each other and others. It may free Whedon to play around with his action figures, but it also prevents his film from relating to anything but itself. ‚ÄĒEH