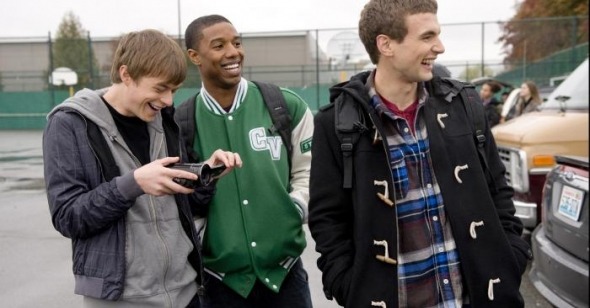 In Chronicle (which truly seemed to materialize in theaters out of thin air‚ÄîI wasn‚Äôt aware of it at all until last Thursday), three high school acquaintances, Andrew (Dane DeHaan), Matt (Alex Russell) and Steve (Michael B. Jordan), encounter an extraterrestrial machine in a pit outside of a barn rave and thus become endowed with powerful telekinesis. Now that it‚Äôs become increasingly common for movie characters embroiled in even the most recognizable real-life scenarios to behave in completely unbelievable ways, it was a pleasure to find that director Josh Trank and his co-scenarist Max Landis credibly realized what these three very average teenaged dudes would likely do if granted unlimited power: act like a bunch of bozos. They levitate objects and crush others, pull pranks, play a quick game of catch in the clouds and vainly try to impose some sort of limiting rules on their new talents using only their high school‚Äìlevel ethical sensibilities. This section is clearly the film‚Äôs raison d‚Äôetre; nothing else in Trank‚Äôs high-school superhero scenario feels as fresh (and truly funny), least of all its violence-filled denouement, which flirts with the worst kind of blockbuster incoherence.

One of the problems with found footage movies like this one has always been, and continues to be, the need to regularly re-establish the vantage point from which the images we‚Äôre watching are being captured. Through the first half of Chronicle, Andrew‚Äôs propensity for constantly filming his life plays as an added marker of his social maladjustment, clearly a gimmick, but a somewhat less artificial one as far as these things go (oneiric shots of Andrew in his bed levitating the camera savvily suggest a never overt onanism). Towards the film‚Äôs conclusion, when the major action kicks in, and Andrew‚Äôs gone mad, zipping like a jet across the Seattle skyline with Matt in hot pursuit, Trank‚Äôs forced to ditch the first-person camera in favor of increasingly absurd ruses. The worst finds Matt and Andrew floating outside of the Space Needle‚Äôs observation deck surrounded by a flotilla of levitated iPads and Canon products that somehow, miraculously, capture the antagonists in a perfect shot/reverse shot pattern. At times, the film‚Äôs patchwork quilt of stitched-together video imagery has a pleasingly hectic feel, at others it reeks of desperation, or, worse, mere utility.

Though Chronicle willfully echoes John Hughes (unlikely bonds born of shared outsider circumstance) and Columbine (Andrew‚Äôs video diaries grow increasingly megalomaniacal), and name-drops Plato, Schopenhauer, and Darwin, its scant 83 minutes don‚Äôt unfold into much. Unlike last week‚Äôs hangover, The Grey, which spent far too much time striving towards grand resonance, Trank‚Äôs film is so concerned with pushing forward that it ends up merely clever where some slight reflection might have elevated it to truly smart. Even so, it‚Äôs February‚Äîthat this film-from-nowhere isn‚Äôt wholly retarded is a blessing. ‚ÄîJR

Jeff, we‚Äôre so on the same telepathic wavelength here that I‚Äôm expecting my nose to start gushing blood any second now. Chronicle is better than I expected it to be, and certainly better than it has to be. When Andrew flatly explains his desire to film everything in his life (well before he and the guys encounter that glowing meteor/all-purpose metaphor in the cave), it‚Äôs a bold-faced bit of character shorthand, but it‚Äôs also more dramatically interesting than the documenter-by-default rationale underwriting Cloverfield. I'd also say that Andrew‚Äôs consistent telekinetic manipulation of his video camera, which creates a truly mobile and expressive point-of-view, is both completely novel for the handicam-horror subgenre and thoughtfully tied to his nascent narcissism and desire to be the featured player in his own epic home movie.

I forgive Chronicle a lot of things‚Äîlike its by-the-book rise-and-fall plotting, its utterly indistinct female characters, and the undisciplined smash-‚Äôem-up conclusion‚Äîsimply because its best images are so startling and original: Jackass by way of The Fury. The midair football game is the exuberant little brother to the nighttime flight passage in Donner‚Äôs original Superman, capturing something truly joyful about unencumbered movement‚Äîthose dreamlike, weightless trajectories barely contained via a wholly objective lens. I thought the visual effects work was superb throughout, especially the small-scale stuff, like the cruel amateur-dentistry exercise Andrew performs on one of his high school tormenters. That creepy-funny shocker could have heralded a much more ruthless movie: what would De Palma have done with a super-powered teenaged horndog's botched first sexual encounter? Trank and Landis‚Äôs decision to "go dark" as Chronicle winds down is theoretically admirable, but as Andrew‚Äôs adolescent angst swells to apocalyptic dimensions (Carrie White Will Have Her Revenge on Seattle!) the stakes get lower. The film is no longer about the tetchy rivalries and jealousies of young men growing into their heightened capacities but rather whether the brash, resourceful filmmakers can stage plausible blockbuster action on a budget. It‚Äôs an onscreen/offscreen conflation of kicky, kinetic impulses that leaves everybody involved worn out and the worse for wear. ‚ÄîAN