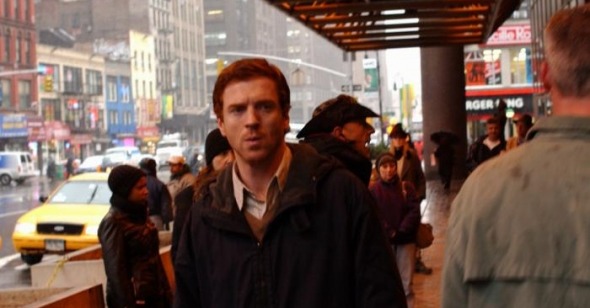 Driven to Distraction
By Nick Pinkerton

Lodge Kerrigan‚Äôs Keane begins unceremoniously, shoving the uninitiated viewer into a tight, grubby scenario. The film tracks an obviously emotionally disturbed man, William Keane (British actor Damian Lewis), through New York‚Äôs Port Authority Bus Terminal, where his daughter may or may not have been kidnapped‚ÄĒthe narrative remains noncommittal‚ÄĒa year prior. And, if nothing else, New York City native Kerrigan‚Äôs movie deserves credit as a contemporary NYC film that completely eschews the metropolis‚Äô big, obvious scenic effects. The director opts for claustrophobic closeness over panorama; the topography of New York and North Bergen, Jersey indistinguishably smutch together in this film‚Äôs drear world, forming one continuous catacomb of exposed beams and naked brick, service-entrances and public restrooms, bulletproof glass and wet underpasses.

In the Port Authority scenes, as for much of the film, Kerrigan keeps his camera perched, Dardennes-style, on our protagonist‚Äôs shoulder, swaying with his steps and latched onto his bland, pink face. From these huddled close-ups our p.o.v. pans and veers in concert with Keane‚Äôs attention; it‚Äôs an attempt to find the visual equivalent of the nauseatingly close, crisp foley work of Kerrigan‚Äôs Clean, Shaven: subjective cinematic psychosis. Shots break from Keane and his huffed, self-absorbed monologues only to hang on meaningless, red herring details‚ÄĒa clock reading ‚Äė4:26,‚Äô perhaps‚ÄĒwhich he turns over and over with the intent scrutiny of a nonsense detective, striving to extract inscrutable meanings from his trail of non-clues.

This fractious whodunit material, and the extended bender that punctuates it, is rough, rigorous stuff, and it works on its own small-scale terms. But the cracks really start to appear in the film‚Äôs latter half, which shifts focus to Keane‚Äôs tentative interactions‚ÄĒtics staunchly held in check‚ÄĒwith a wan, hard-up mother (Amy Ryan) who haunts the Jersey motel where he‚Äôs staying, and the strange paternal relationship that he develops with her daughter, Kira (Abigail Breslin), a pale, bloodless little thing with a high, luminous forehead. The trio‚Äôs soft scenes of makeshift family can‚Äôt, in and of themselves, be accused of more than badly overreaching for shabby-sad beauty and nocturnal solemnity, though a scene where Lewis and Ryan slow dance like awkward 7th graders probably deserves an incredulous snort. What‚Äôs more off-putting is the tension that Kerrigan gradually escalates with the development of these relationships and what this tension effectively reduces Keane‚Äôs already under-drawn character to: an accident waiting to happen.

In spite of the camera‚Äôs near-constant proximity to Lewis, keeping the film ostensibly in first-person singular mode, the movie‚Äôs attitude toward its protagonist‚Äôs mental state strikes me as pretty unsophisticated and hands-off. Keane‚Äôs schizophrenia is used as a force of sustained suspense, and the uncertainty of his capacity for violence‚ÄĒspecifically toward the little girl‚ÄĒis kept luridly dangling over the audience. We see Keane muttering conspiracies down his sleeves, randomly lunging at a stranger in the street, and then tenderly attending to Kira‚Äôs bath, which leaves us only to guess as to when the proverbial other shoe will drop. I‚Äôm sure a pretty good argument could be formed that all of this is intended to call into question the viewer‚Äôs own attitudes and discomforts with the mentally ill, but I would still insist that it‚Äôs a pretty crude device to build a movie around, and it implies a totally wrongheaded attitude toward Keane‚Äôs character. Despite its grimy realist trappings, such callow thriller tropes place Keane in ‚Äúproblem‚ÄĚ picture territory‚ÄĒwith the character‚Äôs condition as an unsolved puzzle‚ÄĒrather than providing the fully-realized, empathetic character study which the title suggests. The ‚ÄúWill he?‚ÄĚ and ‚ÄúWhen?‚ÄĚ sources of suspense here aren‚Äôt far from the hanging ‚ÄúDid he?‚ÄĚ that looms across Clean, Shaven, and Keane‚Äôs faults were great enough to reveal new, basic weaknesses in Kerrigan‚Äôs first feature which were overwhelmed by that film‚Äôs detail-oriented proficiency and the astonishing emergence of Peter Greene.

All that stayed with me after Keane was an unhappy impression of all-abiding tonal uniformity in the hush-tone vespers of dialogues, unhandsome, shallow mise-en-sc√®ne, and rigidly adhered-to aesthetic tenets. This extends to Keane‚Äôs character, though Lewis, whose face suggests a slightly de-evolved Greg Kinnear, does deserve some credit for sheer chutzpah; Kerrigan and Lewis‚Äôs willingness to keep a scene playing long after considerations of pacing and comfort would demand that it should end results in some of the movie‚Äôs few real frissons. The best example of this is Keane‚Äôs spluttered jukebox sing-along, which hangs on the screen just long enough to travel from embarrassing to engaging to boring and back around to engaging again. But if Lewis‚Äôs much-touted performance is committed, unself-conscious stuff, it‚Äôs also everything you‚Äôve come to expect from a schizo star turn. One never doubts the actor‚Äôs devotion; trenches of worry are dug into his face, and his dry crying jags are more unsettling than histrionic. But for all that workmanship, there‚Äôs something absent; Keane is never articulated as more than a sadness or a sickness, and what‚Äôs sorely missing in this focused performance is an element of the unexpected. I was aching to see Lewis play something other than harried, to just allow himself the pointless indulgence of a sudden idiot grin or a nonsense joke, to vacillate even for a moment from the film‚Äôs chartered course of quiet and gray. He doesn‚Äôt, and the result is one of the tidiest movies about madness I‚Äôve ever seen; much as it pains me to admit this, Harmony Korine‚Äôs julien donkey-boy, that swaying junk heap of tossed-together scenes, seems like a truer, chancier film and‚ÄĒoh, irony of ironies‚ÄĒLeo ‚ÄúTitanic‚ÄĚ DiCaprio‚Äôs work in the bloated holiday-season Oscar-juggernaut The Aviator, despite being saddled with Psych 101 motivations, is a lot more complex and human than anything in either of these indie darlings.

Therein lies the problem; Kerrigan has been praised‚ÄĒas he was at this most recent NYFF‚ÄĒas a true independent, in the sixties NYC sense of the word, before Fox Searchlight and the Edward Burns filmography neutralized any significance that the term might‚Äôve once held. And reading up on Kerrigan, I found it difficult not to respect his ethos: Keane was shot on the fly, for under a million bucks, and all of this out of the still-smoldering debris of a catastrophic, aborted 2002 project, In God‚Äôs Hands. So I feel a little guilty for not liking his movie more. But grading Keane on such terms seems, at best, a specious critical paradigm; I have to think back to my teen-punk days, when I would try to convince myself that some hardcore band‚Äôs murky EP, replete with a xeroxed cover culled from an art school drop-out‚Äôs portfolio, was‚ÄĒby virtue of the group‚Äôs being signed to Skullfukk Records‚ÄĒsomehow better or more daring than Steely Dan.

That said, I feel like a postscript addressed to the film world‚Äôs Darren Aronofskys is due, though I‚Äôm sure they‚Äôre too busy tackling slopes of Colombian marching powder bought with Warner Brothers‚Äô cash to check out no-name Young Turk film journals. It is true that American independent film desperately needs more directors like Kerrigan, willing to grapple tough, uninviting material in tough, unwelcoming ways; filmmakers who will approach their medium and their marginality as a means towards something other than Sundance calling cards, made only in the hopes of one day being able to huff major studio dong. But I‚Äôm afraid what the indies don‚Äôt need is more movies like Keane.