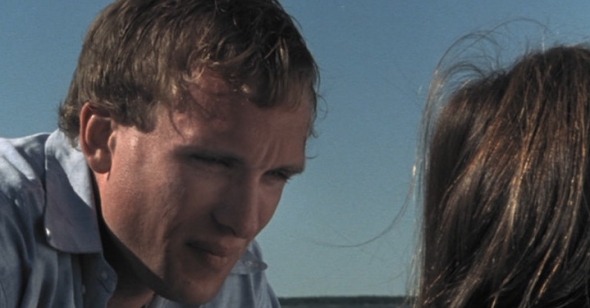 Pulp Fiction‚Äôs first screening at the New York Film Festival is legendary for one filmgoer‚Äôs publicity-stirring heart attack during Uma‚Äôs hypodermic plunge to the heart. Earlier that same year a now-infamous scene from Lodge Kerrigan‚Äôs Clean, Shaven had compelled audiences at both Sundance and Cannes to literally run from the theater screaming. One is the stuff of movie lore, the other forgotten trivia, and it doesn‚Äôt take much of an effort to see why‚ÄĒfor all the former‚Äôs pre-canonization controversy, it‚Äôs of course a thoroughly crowd-pleasing movie with sexy violence and a rather conservative redemption moral, whereas Kerrigan‚Äôs work is unrepentantly unpleasant, a formal and thematic assault on institutional depictions of mental illness.

Clean, Shaven is the latest release in Criterion‚Äôs recent effort to reappraise the American indie film movement of the Nineties, following their definitive releases of Metropolitan, Kicking and Screaming, and Dazed and Confused. It‚Äôs hard for me to accept that these works‚ÄĒmany of which were formative viewing experiences and among the first films I ever rented on video‚ÄĒare now old enough to be dragged through the ringer of historicization. Kerrigan‚Äôs casual aside on the commentary track that his film played at major festivals on a 16mm print is enough of a reality check on How Much Has Changed for this author.

Kerrigan‚Äôs work, except on the most superficial level, has of course very little to do with this historical moment, his brand of rigorous aesthetics and stated narrative interest in marginalized social groups standing in stark contrast to the chatty introspection that defined much of that era. And though Kerrigan has found favor at festivals and a steady flow of funding thanks to his association with Steven Soderbergh (who interviews Kerrigan on the commentary track here), his career has remained doggedly uncommercial in a way that would be refreshing if the successes of his subsequent films‚ÄĒClaire Dolan and Keane‚ÄĒwere less qualified. With this in mind, Kerrigan would seem an unlikely candidate for the Criterion treatment.

It‚Äôs probably not a surprise, given this setup, that the film was a minor revelation. Balancing a lurid interest in the more grotesque qualities of mental illness (Kerrigan notes on the commentary that the film‚Äôs most outrageously gruesome sequence was derived from his readings on ‚Äúblunting‚ÄĚ of tactile sensation) with a formal project to convey the unnerving subjective experience of schizophrenia, the experience is one of constant tension. Curled up on the floor of my living room, I was consumed by the film as it explored the liminal space between abstraction and melodrama. It‚Äôs at once viscerally off-putting and emotionally and intellectually engrossing.

Here‚Äôs your plot summary: Clean, Shaven is the story of Peter (Peter Greene, accomplished enough here to make you glum he‚Äôll forever be known as one of the redneck sodomites in Pulp Fiction), a schizophrenic man recently released from prison searching for his daughter, who has been given up for adoption. On his trail is a detective (Robert Albert), who, putting two and two together has come up with approximately four and thus believes Peter is involved with the murder of a teenage girl. Along the way Peter stays with his emotionally distant mother (Megan Owen)‚ÄĒKerrigan‚Äôs only cursory intimation to any elucidating backstory‚ÄĒand attempts to deal with the garbled radio signals in his head. To say more would spoil the narrative, which, frankly, there isn‚Äôt a lot of.

Instead, the film immerses the viewer inside a Faulknerian unknowable subjectivity, using every tool in its arsenal to bombard us with a constant sensory overload. The film‚Äôs sonic mix by composer Hahn Rowe and supervising sound editor Tony Martinez ‚ÄĒa fifteen-track cacophonous mix of radio signals, angry voices, and unidentifiable electronic squawks‚ÄĒis the dominant formal element, and rightly acknowledged for its technically pristine quality. I‚Äôm not sure if a $60,000 film has ever sounded as good as this. The stark beauty of Canada‚Äôs rural Miscou Island provides visual counterpoint, with occasional eruptions into abstracted menace‚ÄĒjittering powerlines, massive close-ups of a juicy tomato being sliced. The use of avant-garde techniques as a means of reflecting extreme subjectivity is nothing new, of course (as examples, let‚Äôs use Spellbound and Dumbo), but rarely does a film commit to these strategies so thoroughly that its more objective scenes play as alien. As in subsequent films, where he was able to draw vivid performances from Damian Lewis, Colm Meaney, and the late Katrin Cartlidge, the director reveals himself a talented hand with actors here, invoking powerful performances from Greene as well as the cast of Miscou Island unknowns‚ÄĒincluding his own cousin as Greene‚Äôs little girl‚ÄĒfilling in the smaller roles.

Though it by all accounts approximates the experience of schizophrenia, Clean, Shaven like Keane later, does blur a queasy line between dispassionate moralism about the Humanity of the Mentally Ill and a thorough investment in the exploitation of schizophrenia in service of a self-indulgent formalism. Too often, young Kerrigan seems content to shock his audience with outrageous body horror, with one particularly abusive moment featuring a slow pan down a purple, maggot-ridden corpse. At times the film‚Äôs condescension is ridiculous, lazily guilt-tripping its audience by playing out entire sequences and then pulling back the curtain to reveal that it‚Äôs all been a hallucination‚ÄĒgotcha!‚ÄĒand that by being reading what Kerrigan‚Äôs put in front of us, we‚Äôre really revealing our biases about schizophrenics. It‚Äôs the kind of inane reveal one might expect from a birthday party magician.

This self awareness bleeds into its film-school awareness of classical modes and genre‚ÄĒits most self-conscious conceit is its casual use of a tawdry whodunit as a means of revealing the disconnect between Peter‚Äôs inner life and the public fears of schizophrenics. Robert Albert‚Äôs off-kilter detective‚ÄĒthoroughly unprofessional, yellow-bellied, and prone to violent outburst‚ÄĒserves a sort of perfunctory symbolic role, connecting the dots between film noir‚Äôs inquiry into the darker contours of the mind and the film‚Äôs own extreme subjectivity.

No matter, though‚ÄĒthese complaints, all of which arose on second and third viewings, seem quibbling when considered in context of the film‚Äôs tremendous power. Criterion invests their usual precision into this disc, with an immaculate transfer from a 35mm interpositive and a small host of extras, including the aforementioned commentary (Soderbergh makes some unfunny jokes, Kerrigan obliges with polite laughs) and a short critical documentary about the film‚Äôs subjective use of image and sound. Also among the extras are downloadable mp3 files of Hahn Rowe‚Äôs score and various sonic excerpts from the film‚Äôs final sound mix. While a cute gambit, given the disc‚Äôs curatorial emphasis on sound work, the pieces prove less compelling divorced from their visual and narrative contexts. The accompanying booklet features an excellent tribute to the film by Dennis Lim, formerly of the Village Voice, that speaks as much to Lim‚Äôs passion for and comprehension of cinema as it does about the film itself.