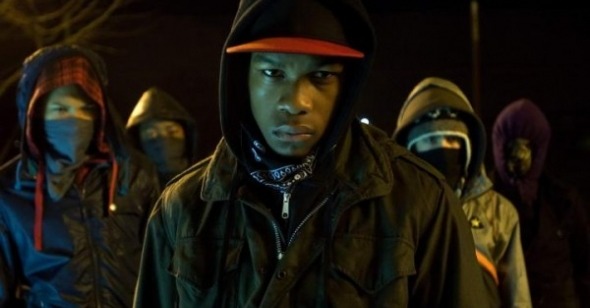 Of all the wonderful little moments in Joe Cornish's terrific Attack the Block, my favorite finds a white slacker (Luke Treadaway) blaring KRS-One's "Sound of da Police"‚ÄĒyou know the one with the massive, clarion "Woop! Woop!" hook‚ÄĒwhile waiting for an elevator in his South London apartment building's lobby. He's brought up short in his head-bobbing swagger by an encounter with the very sort of people the song has been written for (and about): a pack of (mostly) black teenagers, seemingly up to no good. As they sidle up to the elevator, he slips into a deflated, defensive posture‚ÄĒa visual joke complemented by the way the song drops off the soundtrack, one cautiously removed earbud-headphone at a time.

Attack the Block is very much about race, although it's not so pretentious as to be ‚Äúabout race‚ÄĚ: there are trace elements of plenty of 80s science fiction films swimming about in its creative DNA, but The Brother from Another Planet isn't one of them. Cornish's achievement is to craft a whip-crack B-movie entertainment that's built for speed‚ÄĒeverything in this alien-invasion thriller happens before you expect it to‚ÄĒbut that also gets pretty good sociopolitical mileage to the gallon. Comparisons to George A. Romero are apposite but also somehow unfavorable: where the old zombie-monger coats his material in thick allegory, Attack the Block extracts it straight from the pulpy narrative marrow. Grimy-looking kids in hoodies rise to defend their neighborhood out of hormonal fury rather than civic pride; it's only after they realize that the authorities would rather blame them for the chaos than help out that their struggle attains an ethical dimension.

Their bat-wielding council-estate stand is rousing stuff, and the filmmaking has balls too. Not only does Cornish show his central gang doing bad things‚ÄĒlike holding up a woman (Jodie Whittaker) at knifepoint for her engagement ring‚ÄĒhe's ruthless in a way that the similarly themed (and deeply inferior) Super 8 never dared. That film's Spielberg-derived child-endangerment tropes never threatened to pay off; Attack the Block makes it apparent early on that its flawed, resolutely un-cute teenage heroes are actually vulnerable to the attacks of the carnivorous black-furred invaders (shades of Apichatpong's monkey men, with glowing teeth in lieu of eyes). This means that there's actually some threat in the various urban-siege set-pieces (all bristlingly well-edited and brilliantly location-scouted) and raised stakes in the question of when and how pack leader Moses (John Boyega) will recognize his capacity for heroism. Boyega's scarred face and embedded sneer give him a real warrior's (or Warriors) bearing: sword in hand, he cuts quite a figure. He's a strong, resourceful character worth rooting for‚ÄĒand he's in the right movie. ‚ÄĒAN

Adam, I‚Äôm glad you made mention of John Boyega‚ÄĒfor my money, his Moses is the summer‚Äôs first bona fide action hero. He fronts as tough as Captain America, but remains vulnerable and mortal (he could, actually, y‚Äôknow die); his shoulders bear the weight of the world (his world, the block) with the ease of the Green Lantern, but his motivations for taking up the mantle of heroism, which, also like GL, pretty much just fell on him out of the sky, are more complicated and tied to ideas of race and class and pride, as opposed to barely sketched daddy issues. Best of all, squaring his ruthless early-film villainy with his later brooding chivalry teases one‚Äôs ethical sense in a far more complex and stimulating fashion than anything Chris Nolan has managed across his two supposedly queasy Batman spectaculars. Moses‚Äôs superhero accoutrements also beat the rest of the skintight latex brigade: black hoodie and jeans, red-brimmed baseball cap pulled low, ornamental samurai sword ripped from the wall of his flat‚ÄĒfinally, a good guy for the 21st century.

After ATB cruised through its wonderfully concise running time (you could practically watch it twice in the time it takes for the exposition from Transformers 3 to finish up), I couldn‚Äôt help but think on Super 8 as well. The mortality of the ATB protagonists certainly goes a long way toward correcting the milquetoast quality of J.J. Abrams‚Äôs fantasy, but the decision to set the film firmly in a specific, contemporary location may be what truly highlights the flaws of the latter. Cloaked in cheap nostalgia and set in a generic Anywhere, Ohio (U.S. of A!), Super 8 neutered itself from the outset; bad things don‚Äôt really happen in places like this‚ÄĒcinema has beaten this into us, so we invest less. Bad things do happen in crumbling South London apartment complexes, however, and without being terribly obvious about it, ATB manages to say as much about a certain kind of class life in Britain as Fish Tank, only the sex-crazed characters here are dark, furry space aliens. Don‚Äôt let this lead you to expect the bullshit, racist allegorizing of District 9, though. This is, at long last, a summer sci-fi actioner with its head on straight. More, please. ‚ÄĒJR