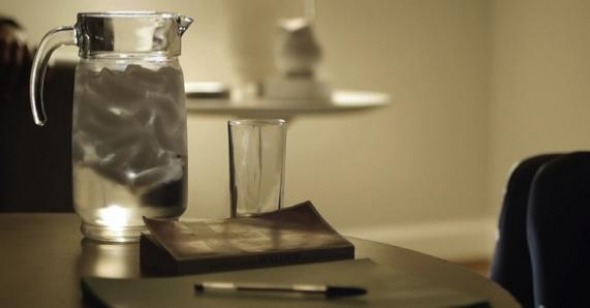 Tales from the Cryptic
By Michael Koresky

In 2004, Shane Carruth made us a part of his headspace. His Primer is a film that perks up the viewer, forces one to sit straight, listen closely. Trying to follow its time-travel narrative‚ÄĒwhich comes to us in shards of technical jargon we‚Äôre seemingly not meant to understand‚ÄĒis like untangling a thin wire with band-aided fingers. The film was a striking debut for being such a fragile experience; it didn‚Äôt seem self-impressed, but rather visualized and dramatized just the way a film shot in a U-Haul locker, a friend‚Äôs office, and its director‚Äôs parents‚Äô garage needed to be, not only because of the modesty of its DIY production but also because it offered the kind of science-fiction story that might evaporate upon closer scrutiny. Rather than evasive, it treaded gingerly into its uncharted territory. The beauty was in the gradual uncovering of the rules of the world, whispered to us in what may as well have been a foreign tongue.

In its introductory sequences, Carruth‚Äôs new movie, Upstream Color similarly encourages a gratifying sort of active spectatorship. The first chapter of the film establishes a purposely obscuring visual and aural scheme for a story that has a vivid, physical pull. After some mysterious, discrete images and sounds‚ÄĒa crumpled ring of paper perched atop a garbage can; teenage boys seemingly under some psychotropic influence; close-ups of exotic plants, soil, and insects; a tiny worm placed inside a marked drug capsule; barely overheard dialogue exchanges‚ÄĒthe film settles as well as it ever will into something like a narrative movement. A young woman, Kris (Amy Seimetz), is slipped one of those previously glimpsed worm roofies by a stranger outside a bar, leading to an extended sequence in which, seemingly hypnotized by the stranger (almost always just off camera, giving her instructions in a monotone), she finds drinking water immensely pleasurable, crunches on bowls of ice as though cereal, laughs maniacally at plays of sunlight on the wall as if they were TV sitcoms, memorizes Walden in its entirety, and finally liquidates her home equity and gives the money to her strange tormenter. The horror goes from mental to physical when, writhing on a sunlit bed one morning, she finds the shape of a worm wriggling through her skin, burrowing under her veins like some Cronenbergian nightmare. As she discovers, in a graphic scene, it can‚Äôt be eradicated by butcher knife; the only remedy turns out to be a literal/metaphorical transfusion, in which a mysterious pig farmer connects Kris to one of his swine and the worm (and perhaps some essence of Kris) is expelled into the animal.

Focusing so far on these specifics feels somewhat inappropriate, both because soon after the aforementioned sequence the film abruptly changes registers and because Upstream Color is so resistant to description. Carruth has claimed to be ‚Äúweirded out by synopses,‚ÄĚ and this is in keeping with his film, which feels terrified to parcel out information in any sort of way that might be given the dreaded label ‚Äúconventional.‚ÄĚ This is both the film‚Äôs artistic singularity and most troubling aspect. Perhaps buoyed (or thwarted, depending on your take) by the years of expectation heaped upon it, Upstream Color feels desperate to impress‚ÄĒand it‚Äôs no surprise that in interviews Carruth talks about wanting to offer a ‚Äúnew language‚ÄĚ of cinema. The more we discover about the world Carruth has created, the more schematic it feels in its obscurity, as though it‚Äôs purposely eliding its concrete center because if we are privileged to look too long and hard at it we might dismiss it as silly or half-baked. And this also might be why Carruth is scared of synopses: if one were to try and describe this film in one sentence (I will not do this here, although a friend recently used the term ‚Äúsoul pig‚ÄĚ in just such an effort), it would do Carruth no favors, nor, in fairness, would it do the film justice. Instead, Carruth is cagey with the audience, giving us enough information to make every odd development seem intriguing and fraught with emotional and philosophical significance.

This is not all to say that Upstream Color is a particularly difficult or confusing movie, but rather that its aesthetic goals ultimately feel at odds with its narrative ones‚ÄĒit spins in ever quickening circles around its intended emotional core until its bits float away like milkweed pods. Carruth has said he would prefer that his audience ‚Äúinternalize‚ÄĚ his film, but Upstream Color comes across as too academic to really get inside. This is disappointing because what Carruth is after here is ultimately more than simply metaphorical, clearly intended as humane. Perhaps we can look at this cold work as an honest artistic statement from a former math major and software engineer turned filmmaker, but it doesn‚Äôt feel effortless; rather it‚Äôs like the film the main characters in Primer might have made by dialing a series of unknown and irreconcilable variables into their machine.

Upstream Color‚Äôs second act‚ÄĒwhich charts the difficultly birthed romance between Kris, post-trauma, and Jeff (played by Carruth), a man who tentatively woos her after an awkward anti‚Äďmeet cute on a public bus‚ÄĒought to be the grounding force for a film that is, after all, a love story. Instead, there‚Äôs a diffident quality to their affair that goes beyond the characters‚Äô disconnection. Seimetz, now sporting short hair and wearing ear-encasing headphones with don‚Äôt-look-at-me aplomb, ably conveys the lingering effects of a harrowing experience (Kris was basically the victim of a psychic rape), if not a need for human connection. While she‚Äôs busy being posed elegantly in the frame, her director grapples with his own performance‚ÄĒa hard-fought battle he ultimately loses. If there‚Äôs any one concrete element that consistently undermines Upstream Color, it‚Äôs the filmmaker‚Äôs woeful onscreen presence (wasn‚Äôt directing, writing, editing, shooting, and scoring enough?). Carruth has a compelling elfin gaze, and he fit right into the techie-talk world of Primer, but here the effort clearly expended on his attempt at naturalism‚ÄĒall overthought, halting mannerisms and flat line deliveries‚ÄĒweighs down Kris and Jeff‚Äôs every scene together, from stilted first date to sudden exclamations of love (‚ÄúI‚Äôm marrying you!‚ÄĚ) to later moments of intended high drama in which their symbiotic bond forces them into a antisocial cocoon of self-doubt and paranoia.

For it becomes clearer as the film wears on that Kris and Jeff are both trying to crawl toward some form of redemption following their paralleled emotional‚ÄĒand physical‚ÄĒscarring. Based on her prior actions and that her abductor was never found, she has been diagnosed as a schizophrenic; his secret past involves an ignominious professional downfall in which he embezzled money and lost his broker‚Äôs license. One of the film‚Äôs puzzles is how similar their pasts might be. Amidst all this, Carruth adds more questions by intercutting enigmatic scenes of that darn pig farmer, either a guardian angel or a demon, overseeing his flock‚ÄĒwhich includes not only farm animals but other human couples in the midst of falling apart, implying Carruth is forming a grander statement about the tough stuff of love more than necessarily focusing on one particular romance.

Replacing moments of genuine interaction, we get associative, occasionally heavy-handed cuts: an image of the center aisle of a subway car followed by a graphic match of a pig pen that Eisenstein might have appreciated; an overhead of Jeff and Kris nervously canoodling in a bathtub followed a shot of by pigs cuddling; he cries, she cries, and a bag of baby pigs is thrown in the river; and so on. The trials that befall Kris and Jeff, as well as others glimpsed throughout, would seem to make Upstream Color partly a film about the possibility of transcending trauma‚ÄĒwhether caused by addiction or abuse‚ÄĒthrough love, yet we‚Äôre kept at such a remove from Kris and Jeff‚Äôs inner lives that the characters feel like spare parts, as randomly assembled as the film‚Äôs many strands. Despite a preponderance of shallow-focus shots‚ÄĒevidence that Carruth has a slightly trendier aesthetic now than when he made Primer‚ÄĒCarruth occasionally happens upon a beguiling image. Or a compelling fragment of a thought. But there‚Äôs no totalizing, stabilizing force, as one gets in a film by Malick, to whom Carruth has been simplistically compared. Upstream Color plays more like an overly straight-faced work by Charlie Kaufman, whose films also stab out in all directions, always generously, never boringly, sometimes fruitlessly.