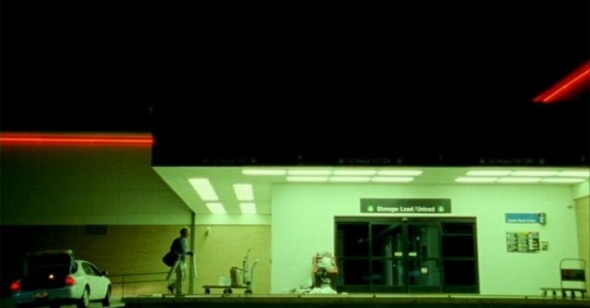 The Natural
Elbert Ventura on Primer

Would we ever hear from Shane Carruth again? The question has floated like a thought balloon over many movie-lovers’ heads since 2004. Word of aborted projects and the occasional wisp of a credit (a “special thanks” in Looper) would occasionally bring Carruth—the director of arguably the best American sci-fi flick of the last 20 years—back into view. But as Primer, his still staggering debut, receded further into the distance, we had to entertain the possibility that it might also end up the greatest one-off of our moviegoing lives.

Its status as a rare object was part of the wonder of Primer: From out of nowhere, Carruth—a software engineer in a previous life, for goodness sake—came to us fully formed. The movie captivated Sundance in 2004, where it won the Grand Jury Prize over more obvious indiewood fare like Napoleon Dynamite and Garden State. Its most conspicuous quality was its assurance. A lean, lapidary, absorbing genre picture made for a song, it was clearly the work of a confident artist—but not in the way American independent cinema has come to define the word. That is to say, Primer didn’t ooze confidence, didn’t radiate the grandstanding bluster of the calculating careerist and the wunderkind manqué. It was as inner-directed a Sundance success as we’ve seen, a radical movie that carried its radicalism lightly.

Years and multiple viewings later, the movie seems an inexhaustible resource—and, watched again today, even more miraculous than I remembered. It stands alone, an alien monolith in the landscape, unmoored to a cinematic school or movement, oblivious to fashion or trend. Part of its allure derives from Carruth’s for-the-ages multi-hyphenate labors. He is director, writer, producer, star, editor, composer, production designer, cameraman—an impossible performance. Cassavetes gone geek, Carruth, in one 77-minute flourish, exploded the boundaries of what was possible for the DIY auteur. More a product of necessity than hubris, Carruth’s determination to fill all the slots reflected his entrepreneurial, problem-solving sensibility: a job had to be done, so he learned how to do it. (No wonder Steven Soderbergh, our problem-solver laureate, is a huge fan.)

The movie itself is a metaphor for its own creation: We are introduced to a quartet of young engineers, hard at work on a mind-bending, handmade invention. The nature of innovation being what it is, the machine, as one of the men discovers, actually does quite another thing than what they intended it to do. Somehow, they have accidentally constructed a time machine. Abe (David Sullivan), the first one to figure this out, shares the discovery with his best friend, Aaron (Carruth). The two keep this fact to themselves and their colleagues in the dark, the first (or is it?) of the movie’s many violations of trust.

Much of the scrutiny that’s been devoted to Primer has focused on its handling of time travel. We won’t get into too many details here (entire sections of the Internet teem with such ruminations). Carruth, hewing to as scientifically defensible a vision of time travel as he can, envisions a machine that simply opens a “loop” when turned on; step into the box six hours after it comes on, stay in for another six hours, and you’ll step out at the moment when the switch was first flipped. With this new power, Abe and Aaron play around, conservatively at first. Their initial forays see them using the machines to go back in time and make some nice calls—but not too nice—on the stock market. But the complications pile up in unexpected ways, and the movie’s great pleasure is the mastery with which it doles out the details of the fallout.

Primer toys with the same paradoxes and dilemmas that other time-travel movies have explored: the fracturing of identity, the cascading effect of changing the past, the ethics of foreknowledge. Carruth’s treatment of such questions is especially thorough and grounded, though he never spells anything out quite so clearly. (No other movie in recent years seemed as designed to be dissected post-viewing.) When a character, hungry from spending several hours in a machine that brought him back in time, says, “I haven’t eaten since later this afternoon,” it’s a clever line that gets at the palpable and practical effects of the process.

But while it’s Primer’s high-concept rigor that gets everyone writing exegeses, it’s the low-key naturalism that got my attention the first time around. The movie takes place in the recognizable present; the exteriors are nondescript American sprawl. (Setting a fantastical scenario in the pedestrian Now is part of the movie’s genius, something it had in common with another great American film from the same year, Eternal Sunshine of the Spotless Mind.) The first half hour is among the most stimulating and immersive passages in modern American movies. We aren’t so much introduced to the characters as airdropped into their conversations—an Altman-esque cacophony of tech talk, entrepreneur-ese, and inside patter. The indecipherable badinage reflects not just Carruth’s obsession with process but also his fondness for ellipses. Those early scenes of the project’s genesis add up to one of Primer’s more underrated achievements—it’s one of the great snapshots of startup culture.

Even more important, we owe to Primer the rediscovery of a forgotten pleasure: how exhilarating disorientation can be when you’re in sure hands. The meager budget may have had something to do with the film’s leanness, but Carruth’s allergy to exposition makes for riveting storytelling. For a good chunk of the first half, a viewer coming in cold wouldn’t even know they were watching a time-travel movie. (Even voiceover narration, normally a tool that clarifies, only obfuscates here.) As Abe and Aaron shuttle back and forth through time, it’s not just their friendship that decays but their bodies as well—a mystery ear bleed, a fainting spell, loss of motor control. The destabilization is mimicked by the camera and editing. Images become fractured; the narrative becomes less a succession of scenes than a jumble of shards to be pieced together.

Underneath it all is an emotional bass line whose thump you may miss the first time around. In interviews, Carruth has talked about how the theme of trust came first; a time-travel movie just happened to be the vehicle he settled on to explore it. Too busy keeping up with the multiplying plotlines and protagonists, the viewer may need a second viewing to realize that Primer essentially depicts the trajectory of a failing friendship. In this instance, the acquisition of knowledge skews the balance of power. Abe’s discovery of what the machine can do, and what he chooses to do with that discovery, tips an equilibrium that is never restored—even if the power dynamics eventually shift. Perhaps recondite to a fault, the depiction of Abe and Aaron’s relationship can seem a little straitened; the movie’s foray into the moral dimensions of its scenario can be more cerebral than visceral. But if it’s a flaw, it’s one that springs from a welcome tendency: Carruth’s predilection to err on the side of rigor and restraint.

That tendency may well be why Primer stands out in the past decade of American independent cinema. In its aversion to patness and hand-holding, Primer is nothing less than rebuke of its contemporaries. That Carruth came to moviemaking via a side door only underscores how singular it is. By now, fans can reel off the remarkable circumstances surrounding the production: Carruth’s remarkable multi-hyphenate feat; his parents, the catering crew; a 2:1 shooting ratio; a $7,000 budget. Carruth has been justifiably wary of the fixation on the movie’s production, which might come at the expense of the film itself. But make no mistake: Primer doesn’t need the crutch of its back story to stake its claim to greatness (I’m looking at you, Beasts of the Southern Wild).

While the facts of its making shouldn’t inflate our estimation or obscure Primer’s true virtues, it would be a lie to say that they don’t render the movie’s very existence as something miraculous—and, yes, as a source of hope. For Primer is proof that the movies, a hundred years old and eulogized for nearly as long, are still capable of astonishing us, and that the forms in which that astonishment comes are constantly evolving. That reminder is needed more than ever when the culture seems determined to write the medium’s epitaph. In an interminable essay for The New Republic from September 2012, the reliably windy David Denby sang his woeful song about the end of movies. But the movies are only dying if you buy Denby’s definition of a good movie. “[N]ot everything a film artist wants to say can be said with $3 million. Artists who want to work with, say, $30 million (still a moderate amount of money by Hollywood standards) often have an impossible time getting their movies made,” he writes. Not necessarily untrue—but while I’m all for our artists being well-fed, I’d be more receptive to Denby’s lament if the eight-figure budget wasn’t a baseline for his idea of a vibrant film culture.

Under this circumscribed idea of a thriving cinema, something like Primer—never reviewed in Denby’s New Yorker—could only ever aspire to being a curio. The real action still takes place in the great Hollywood multi-million-dollar middle. Carruth may chafe at seeing his $7,000 budget get so much attention, but it’s a useful argument against the mindset that the problem with movies today is that a mid-range indie director like Bennett Miller has trouble raising $30 million. Working in a collaborative, unwieldy artform, Carruth made a movie that is as personal and visionary as anything that’s been made in the last ten years—and that should have been at the center of film culture had mainstream critics allowed it.

An emblem of what’s possible, Primer was the first movie that came to mind when I was asked to participate in this symposium many months ago. At the time I chose it, the movie was Carruth’s only child—Upstream Color, his long-awaited sophomore effort, was still a secret to the world. Primer’s status as sui generis, almost a freak occurrence, authored by an outsider who we never heard from again, filled me with hope about movies: These wonders are still possible. But in the wake of Carruth’s re-emergence, a different optimism inflects my appreciation. The mystique of the miraculous one-off has worn off. Watching Primer again, I see not just a great movie but the foundation of an oeuvre we’ll have the privilege of following in the years to come.