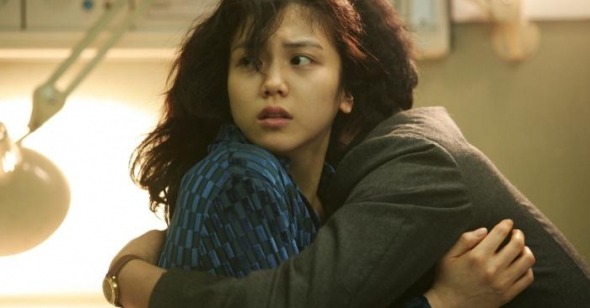 By now, it should be readily acknowledged that Park Chan-wook‚Äôs films, for all their maker‚Äôs talents as a visual stylist, are a bit moronic. Remove the comparatively dense and ethically ambiguous Sympathy for Mr. Vengeance from his oeuvre, and the rest of the lot seem hardly worth the effort of watching, much less devoting serious consideration to. Supremely bombastic and marred by a wildly suspect moral calculus (both in terms of diegesis and Park‚Äôs questionable commitment to unpacking the concept of vengeance as opposed to just exploiting its nastiness), Oldboy and Sympathy for Lady Vengeance only surprised in that they found any traction at all‚ÄĒand we won‚Äôt even touch his abhorrent chapter of Three...Extremes and the nonsensical Korean studio stiffy JSA: Joint Security Area. Park is to Asian genre film what Sam Mendes is to middle-budget American prestige pictures‚ÄĒfull of sound and fury. You know the rest.

Park‚Äôs latest, Thirst, is a vampire film, coming at a time when consumers seem at peak hunger for such things. This savvy befits a filmmaker who populates his movies with Xtreme incident to maintain outsider cachet, while still slavishly remaining in thrall to convention and trend. It‚Äôs also, given Park‚Äôs‚ÄĒand much of recent South Korean cinema‚Äôs‚ÄĒtendency towards narrative excess (witness the variety of half considered subplots that run huffing and puffing alongside the main narratives of The Host, Save the Green Planet, The Chaser), a heaving love story, a riff on Double Indemnity, a movie about faith and feminine empowerment, and yes, a bloody vampire flick. The narrative is built from gibberish: Father Sang-hyeon (Song Kang-ho from The Host), so upset at the amount of misery in the world, surrenders his body to science, and is infected with a horrible virus that eventually kills him in an oral explosion of the red stuff that recalls a similarly Grand Guignol climactic bit of violence in Ran. In trying to save the priest, the staff orders a transfusion, but pulls out some bad blood, resulting in Sang-hyeon‚Äôs inexplicable (explanations are not Park‚Äôs interest here) rebirth as a vampire. A bloodsucker, but of a kindler gentler variety‚ÄĒhe drinks only from the IVs of coma patients at the hospital where he volunteers, and in small doses.

Father Sang-hyeon resumes life as normal, sans daylight and regular food. During his work hours, he comes into contact with an old friend whose wife, Tae-joo (Kim Ok-vin), young, alluring, and hugely put-upon by her difficult in-laws, seems, like all good femmes fatales, in need of a little attention. Their affair begins quietly, awkwardly, and gradually heats in an intensity only heightened by the literal bloodlust underscoring their relationship (this is Park nodding to the necessities of vampire love and lore). Before long, Tae-joo‚Äôs convinced the hapless, formerly celibate vampire priest that her husband‚Äôs been beating her (a ruse, and the first sign of Kim‚Äôs duplicitous nature), and the two murder him Sunrise-style in one of the film‚Äôs most breathtakingly beautiful, and successfully horrific segments. By somewhere around the 70 or 80 minute mark, Sang-hyeon, so outraged at Kim‚Äôs deception, snaps her neck in a fit of pique (he‚Äôs gradually been pushing his own ethical boundaries throughout the film to arrive at this place), and in a flash of regret, brings her back to life as his vampiric prot√©g√©. Their love affair continues, but now on a more equal footing. That‚Äôs when the blood really starts to flow.

Tae-joo‚Äôs sexual awakening is only the beginning of a wholesale transformation that slow burns over the course of the film. By film‚Äôs end, her skin‚Äôs no longer sallow, her posture doesn‚Äôt suggest defeat. Instead, she‚Äôs flying over the city, arms outstretched, hunting motorists for sport, and generally reveling in her own invincibility. Pull any two frames of Kim pre- and post-rebirth, set them side by side, and have fun trying to identify them as the same actress. This is not a function solely of makeup artistry and styling‚ÄĒKim‚Äôs performance is startling in its rawness and range, and unexpected from a filmmaker whose work usually ends up highlighting his own virtuosity with the camera and the ingenuity of his contrived depravities instead of the battered humanity he‚Äôs alleging to track (Bae Doo-na from Sympathy for Mr. Vengeance represents another notable example of a strong female performance in Park‚Äôs filmography). In transitioning from downtrodden wife to evil goddess, Kim signals a spectrum of emotion with her expressive, silent movie‚Äďready face which morphs puttylike from shifty-eyed hesitancy about adultery to wide-eyed discovery of voracious sexual pleasure and desire, finally settling into a grimly triumphant, hard-eyed mask as she comes into full realization of her powers and acceptance of bloodlust. This remarkable turnabout from shrew to Kali almost redeems Thirst‚Äôs bloated running length and awkward storytelling.

Thrist is mostly a mess, but it will probably continue Park‚Äôs inexplicable string of praise from mainstream reviewers (as of this writing it‚Äôs already won the strong endorsement of Lisa Schwarzbaum and Richard Corliss). As I left the press screening, a couple of typical critics‚ÄĒsmall, male, squirrelly, varying amounts of hair and skin coloration‚ÄĒbegan talking about the film while a number of us (of both sexes) milled about the lobby in easy earshot of their conversation:

Critic 1: What‚Äôd you think?
Critic 2: (shrugs) At least she got naked in it. That‚Äôs what I was waiting for.
Critic 1: (nods approval)

In a flash, I understood what it is that elevates a filmmaker like Park Chan-wook to the heights of critical acclaim: it‚Äôs less the quality of the films themselves (which are dubious) than the quality of the brains examining them, especially those hollering early adopters (i.e. the online big font set) who look at new films less as holistic pieces of art than fanboy wishlists nervously pored over on Christmas Eve (and often set the tone for the overall debate on a given film, even in temples of the highbrown like Cannes). If Santa delivers the next morning: OMG!?!%! BEST MOVIE EVER!@#$@! If not, then on to the next shiny bauble. (Thirst, with its pretty packed blend of female nudity, cascades of spraying blood, and other effects-driven violence should more than satisfy.) I‚Äôve got nothing against genre films, wholeheartedly endorse Quentin Tarantino and generally support serious auteurs like Claire Denis, Olivier Assayas, Tsai Ming-liang and Nuri Bilge Ceylan when they try on genre trappings. But the fanboy crowd increasingly reminds me of a salivating bunch of Romans waiting for the lions to have their way with the Christians.

Back to Thirst: It‚Äôs probably my favorite Park Chan-wook film to date, but it‚Äôs still an overlong failure of storytelling unbalanced by needless (even for an art-genre exercise) excess and improper pacing. What keeps it watchable and often compelling is simply Kim Ok-vin. The film that precedes her transition to vampirism feels flabby and poky, but takes on new life afterwards. As far as recent vampire flicks are concerned, Thirst does represent a step in the right direction from the completely incoherent Blood: The Last Vampire and the reactionary abstinence fable Twilight, in which all the female protagonist‚ÄĒuncharismatic, completely lacking in notable qualities‚ÄĒis required to do is watch her undead boyfriend in awe as he performs ever more impressive feats of strength and daring (hell, he even glitters like gold when exposed to the sun). Thirst‚Äôs finale, in which Park Chan-wook reveals himself as some kind of crazy romantic, not only makes efforts to tie up parts of his narrative (unlikely for such a muddled contraption) but also reminds why his two main characters once liked each other to begin with, recapitulating a simple moment of tenderness between the priest and his lover from the first act. This subtle, but grandly romantic gesture, so unlikely in Park‚Äôs work, softened me towards a filmmaker I‚Äôve spent considerable time resisting under the duress of his battering ram approach. If he could toss together a flamboyant, lurid, amorous musical starring Kim (a remake of Nicholas Ray‚Äôs Hot Blood perhaps?), I might just be willing to switch sides. For now, he‚Äôs still on probation.