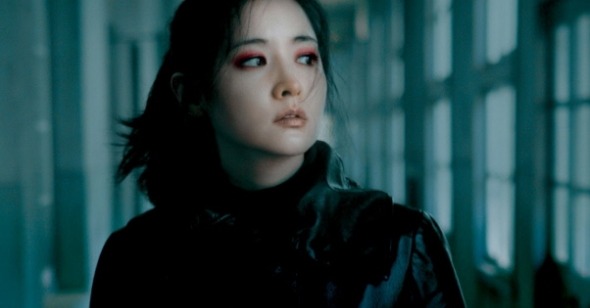 Accolades have been heaped on Park Chan-wook so fast and furious from Western film critics (including this one) that maybe it‚Äôs time to take a step back and provide room for further evaluation. Why put the brakes on now? Because Chan-wook‚Äôs last three films have seen proper release in the States in only little over half a year‚Äôs time, and the hype that has accompanied them (especially the nearly out-of-nowhere Oldboy) has drastically distorted the merits and flaws of this filmmaker‚Äôs work. Now that Lady Vengeance and Cut (part of the Three‚Ä¶Extremes omnibus film) have arrived on our shores, there‚Äôs a palpable, sad decline in this exciting director‚Äôs vision. The former completes the so-called ‚ÄúVengeance‚ÄĚ trilogy that began with Sympathy for Mr. Vengeance and Oldboy, while the latter is yet another meditation on retribution. Cut is wholly awful, but will (perhaps not rightfully) be excused as a short film of inferior status. Judging solely by Lady Vengeance, then, it‚Äôs clear Chan-wook hasn‚Äôt fallen totally off the mark. And yet, considering what he‚Äôs capable of, Lady Vengeance, like Cut, reveals signs that Chan-wook hasn‚Äôt much left to say about the moral effects of revenge. And how he says it this go-around is downright questionable.

Lady Vengeance parts company with Mr. Vengeance and Oldboy in a number of respects. For one, this time Chan-wook has written a pulp narrative centered around a female protagonist: Lee Gaem-ja (Lee Young-ae) is released from the prison where she‚Äôs spent 13 years of her life for abducting and killing a young boy. Gaem-ja‚Äôs exemplary behavior in jail has earned her a plethora of friends who are willing to help her on the outside, not only by taking her in and providing her with work, but in plotting her revenge on Mr. Baek (Oldboy star Choi Min-sik), the schoolteacher who viscously exploited her when she turned to him for help. A single mother abandoned by her boyfriend, Gaem-ja was manipulated into the kidnapping, an idea of Mr. Baek‚Äôs for obtaining enough money to raise a child. Everything went wrong, of course. Instead of sticking with the plan, Baek icily killed the child and then threatened Gaem-ja into taking the fall by saying he‚Äôd kill Gaem-ja‚Äôs baby if she didn‚Äôt. In the present, Gaem-ja reunites with her daughter Jenny (Kwon Yea-young)‚ÄĒadopted by an Australian couple‚ÄĒand sets off on her quest for justice.

This dry plot description doesn‚Äôt begin to account for the intricacy of Lady Vengeance‚Äôs narrative structure, which jumps around in time at light-speed, offering subplot detours and tangents in flashbacks and even flashbacks-within-flashbacks. The overall effect is nothing short of exhilarating. In the Reverse Shot East Meets West symposium I compared Oldboy to Kill Bill. Lady Vengeance‚Äôs similarities to Tarantino‚Äôs two ‚Äúvolume‚ÄĚ film are even more striking, not only due to the feminine slant (and the prevalent mother-daughter relationship) of both stories but also because of the labyrinthine structure of each. Chan-wook displays a keen formal dexterity by compacting more information in a shorter amount of time (and doing so with wit and style) and then disseminating it in tiny bites and fragments, sometimes in nothing more than single images that nonetheless suggest entire films. Shots themselves are brilliantly composed, and Chan-wook‚Äôs mastery of the odd, unique angle for capturing action and making the familiar look fresh is becoming a matter of fact. His methods are put to best use in the back stories of Gaem-ja‚Äôs prison mates, a colorful‚ÄĒyet not romanticized‚ÄĒgroup of troubled young women who sometimes take to sexually exploitative master and servant roles. As usual, Chan-wook is incredibly graphic in portraying torture and humiliation, but the speed and complexity of the film‚Äôs stream of conscious, achronological depiction of events renders them as aesthetically vibrant as they are brutal.

The film sails along, coasting on its pure, cinematic delights, until Gaem-ja finally confronts Mr. Baek. It‚Äôs here that Lady Vengeance further departs from Mr. Vengeance and Oldboy by focusing on redemption and not only tragedy, and it‚Äôs also ultimately the point at which the film falls apart. It‚Äôs not that such a violent, misanthropic story should forsake any illusions of deliverance‚ÄĒit‚Äôs that the devices that Chan-wook employs to investigate revenge‚Äôs ambiguities are, this time around, highly suspect. For one, the rush of the film‚Äôs unconventional, alinear narrative stutters to a halt, replaced by a plodding dependence on the bleak (the colors become eerily monochromatic) present tense. Right before she‚Äôs about to off Mr. Baek in an abandoned schoolhouse, Gaem-ja discovers Baek‚Äôs responsibility for the deaths of several other children. She gathers the parents at the schoolhouse and puts Baek‚Äôs life in their hands. Does it make any sense that Gaem-ja shows these parents the snuff footage of Baek hanging and committing other unspeakable acts against their kids? Doesn‚Äôt this make her nearly as cruel as Baek? Somehow I doubt Chan-wook was aware of the absurdity and queasiness of this way of emphasizing the parents‚Äô rage, but it still doesn‚Äôt let him off the hook. This difficult scene, heightened by a swelling orchestral score (music has been one of the director‚Äôs weakest points, as the constant Vivaldi in Lady Vengeance betrays in its lame attempt to evoke suspense and irony), simply comes across as sensationalist.

Chan-wook then places his audience at an ethical crossroads of sorts. The parents determine what to do with Baek and, after much debate, decide on each partaking in savagely butchering the monster (Gaem-ja provides the axes and knives). The image of a group of bourgeois adults lining up on a bench for their turn at hacking up a human being could have been a brilliant piece of dark humor, but Chan-wook fumbles and, aside from a few throwaway jokes, plays the scene seriously. Trying for something ‚Äúdifficult,‚ÄĚ he ends up with something ludicrous. Chan-wook‚Äôs clunky handling of moral issues (one parent points out that Baek‚Äôs violent murder won‚Äôt bring their children back, only to be conveniently pushed into the background) doesn‚Äôt earn the weighty substance he strives for. Gaem-ja‚Äôs relationship to her daughter remains grossly underdeveloped; the ending, in which Gaem-ja melancholically recognizes the insufficiency of atoning for her actions, would have been poignant had Chan-wook invested in a deep spiritual struggle. The first-two third‚Äôs comic book style action doesn‚Äôt provide such a lead-in.

With its inconsistent tone Lady Vengeance fails to treat the subject of retribution and its consequences with a complexity absent in the first two ‚Äúvengeance‚ÄĚ films. While largely nihilistic, Mr. Vengeance and Oldboy painted broad-stroked pulp classics that actually allowed space for irony, humor, and a tragic dimension. But Lady Vengeance isn‚Äôt the nuanced response offering a shred of hope and repentance. Toward the end there‚Äôs a hint that Lady Vengeance might‚Äôve gone down the same what-goes-around-comes-around path as its predecessors, which would have made it less of an artistic gamble but perhaps more within Chan-wook‚Äôs range. And that‚Äôs a shame. When Chan-wook was questioned after the premiere of Oldboy at Cannes why he decided to make another film about vengeance he shot back by claiming he could direct three, even a dozen more films about the same subject. Maybe that‚Äôs so, but perhaps it‚Äôs a good thing that after Lady Vengeance Chan-wook will be moving into different territory.