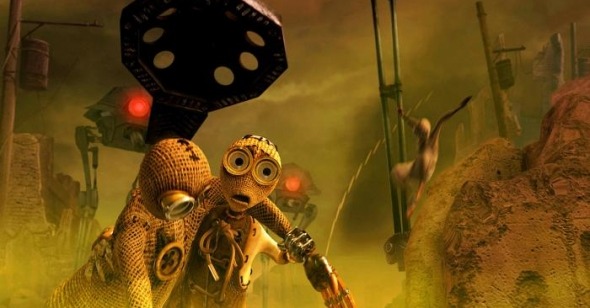 It‚Äôs Only a Game
by Tyson Kubota

For most of the past decade, as the death knell has sounded repeatedly for American studio-produced hand-drawn animation, a new set of clich√©s have come into being for‚ÄĒmostly computer-animated‚ÄĒfamily movies. Instead of the princesses, musical numbers, and talking animal sidekicks of Little Mermaid‚Äďera Disney, these CG beasts feature obnoxious, winking references to mass culture and are littered with several-years-expired pop songs.

In place of the clean lines and fluid, expressive character movement of the best cel animation, almost all recent non-Pixar animated movies have tended toward the cut-rate dreck of Space Chimps or Madagascar or the death mask‚Äďlike motion capture of Robert Zemeckis‚Äôs Beowulf, with their characters‚Äô uncanny, yet disturbingly robotic, resemblance to humans. Featuring off-the-shelf character models and recycled textures, these made-by-machine movies have been anathema to the expressive tendencies of animation's past. Here, American animation's historical attention (at least, pre-Hanna Barbera) to quality draftsmanship has been largely supplanted by animals with flatly shaded spheres for eyes and blindingly white-toothed, creepily anthropomorphic grins (watch any of the Dreamworks movies or click here): the indifference of the visual rendering is a cold acknowledgement of the commercial necessities of movies targeted at children.

As a PG-13 rated film with an auteurist stamp and immersive, detailed images, 9 seemed to hold some promise as a corrective to this glut of animated product; instead, its rote, repetitive structure and execution defeat its more mature thematic and aesthetic aspirations. Based on Shane Acker's 2005 Oscar-nominated UCLA thesis short of the same title, 9 concerns a group of sentient, celebrity-voiced rag dolls tasked with revitalizing the earth. Created by a remorseful scientist in the final days of a crumbling fascist regime, the dolls, now the Earth‚Äôs only survivors, must escape and outwit lumbering mechanical ravens, spiders, and wolflike creatures. The glowing green ‚Äúlife energy‚ÄĚ that animates the dolls, as well as their scrap-metal pursuers, is presumably the means by which the earth can be restored to a more habitable state. There's also a meta-machine that births new machines and sucks the ‚Äúsouls‚ÄĚ from the rag dolls for some evil purpose (presumably to populate the world with more malevolent machines).

If this sounds convoluted, it is. The feature film‚Äôs attempt at a more elaborate plot to expand on the implicit backstory of the original short merely makes its generic forebears more obvious (everything from Mad Max to Hayao Miyazaki‚Äôs Nausic√§a of the Valley of the Wind). 9 neatly sidesteps two of the most difficult challenges in the postapocalyptic subgenre: depicting how the protagonists survive (the search for food, water, and shelter occupies most of the narrative content of more rigorous works like Cormac McCarthy‚Äôs novel The Road), and conveying the story's particulars via minimal dialogue (i.e. in a world with a decimated population, characters should only speak when necessary, or not at all, as in Luc Besson‚Äôs The Last Combat). Here, the doll protagonists apparently need no physical sustenance, and they talk nonstop, which dashes any attempt at evoking a mood of loneliness and isolation.

With its unique visual textures, the film didn‚Äôt need instantly familiar star voices, and Elijah Wood‚Äôs, as the protagonist doll #9, is grating and distracting, as are those of Christopher Plummer, Jennifer Connelly, Martin Landau, and Crispin Glover. The heavy use of celebrity voiceover and rote expository dialogue is predictably conservative. The short film 9 had no dialogue and, like Pixar's depiction of the robot WALL*E's lonely existence on the future landfill Earth, relied on movement to express its characters' inner states (even if these were as simple as ‚Äúfear‚ÄĚ or ‚Äúbravery‚ÄĚ). With its tedious exposition, the feature-length expansion lacks the rigor of the first acts of WALL*E or even I Am Legend. The opening of that 2007 dystopic tale derived much of its impact from seeing empty New York streets teeming with wild animals and recognizable landmarks overgrown with weeds. Audiences certainly responded to Will Smith driving his Mustang through a Manhattan being reclaimed by nature because they could mentally superimpose the film‚Äôs imagery on their present-day, real-world experiences. On the other hand, 9's lead-up to the world‚Äôs end involves an old scientist toiling in a gray, anonymous fascist state patrolled by red-eyed robots; nothing in its narrative develops with enough precision or subtlety to be emotionally resonant.

9 is replete with the most clich√©d signifiers of postapocalyptic fiction: a scorched earth caused by a repressive government‚Äôs unthinking reliance on technology; faux-newsreel flashbacks of life before the disaster (often accompanied by explanations of ‚Äúwhat went wrong‚ÄĚ); a lone band of survivors comprised of archetypal characters (wizened leader, brash warrior, cautious scholar, artist/chronicler/observer, etc.). The apocalyptic environment itself is an anonymous, misty mishmash of bombed-out European cities, rendered through what can charitably be called a PC game aesthetic‚ÄĒthink Killzone, Half-Life 2, or Fallout 3. The latter game is probably the closest match to 9's visuals, yet by forcing players to traverse realistic distances between settlements, it in some ways offers a more complete and emotionally fraught experience of moving through the rubble of a civilization than Acker's film.

Appropriately, 9 also bears certain comparisons to machinima, the subculture of creating animated videos by using and modifying preexisting videogame worlds and characters (the Red vs. Blue series, based on the Halo games, is probably the best known example). In a way, it's ironic that machinima should be the most immediate referent for 9; Acker's film seeks to present a junkyard world of repurposed items (the dolls see through camera-lens eyes and arm themselves with kitchen knife-swords in their fight against their scrap-metal opponents), but instead of making the familiar seem new, its bricolage only makes its formal elements more obviously borrowed. Although Acker's short came first by several years, the posters for 9 will probably remind many prospective viewers of Sackboy, the protagonist of the online Playstation 3 game LittleBigPlanet.

The familiarity of 9's videogame-like visuals only reinforces the rote, anonymous nature of its narrative. Shane Acker's short was an accomplished exercise in establishing impressive atmosphere and approximating slick, big-budget thrills, but it‚Äôs redundant as a feature. Its story, a series of loud chase scenes punctuated by flashbacks, is thin and feels padded even at 80 minutes; for those hoping for an intelligent exploration of an imagined world or for those awaiting a renaissance of animated films not explicitly targeted at children, it's a disappointing development.