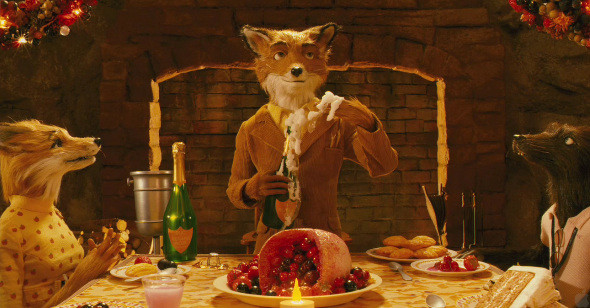 With the recent announcement that no less than 20 films were submitted for this year’s Best Animated Feature Oscar, 2009 can rightly be labeled something of a watershed year for the format. Of course, some of those entries are bland generic staples—the new Ice Age movie, the Chipmunks sequel, Battle for Terra, Monsters vs. Aliens—shiny, machine-tooled baubles designed to attract and pacify the youngest-audience quadrant for big studio profits. But considering entries like Coraline, 9, Ponyo, Up, the forthcoming A Town Called Panic, and Wes Anderson’s just-released Fantastic Mr. Fox, a strong case could be made for animation reemerging as not just a medium for displaying up-to-the minute technologies, but for personal artistic expression. This is no longer just a Pixar/Miyazaki world. Given that a director’s craft depends so fully on imagining the layout of a frame and then re-creating it before a camera, it’s surprising that more established directors haven’t tried their hands at animation—it’s a control freak’s paradise.

There are few American filmmakers currently working who are more fastidious about composition than Wes Anderson, and in a sense he has been making animated films all along. His precise tableaux, overstuffed production design, and carefully calibrated camera movements have always threatened to suffocate the living, breathing beings he sets before the lens, and those humans, in turn, deliver performances that are so particular and controlled, that, at their worst, they threaten to lapse into a kind of puppetry. Anderson changes little in the transition to animated filmmaking, and, if anything, the ability to manipulate the minutia of his frames has allowed for a furthering of his aesthetic. Witness Fantastic Mr. Fox’s battery of extreme close-ups, which put to shame the frontal portraiture of his earlier films, or the ingenious sculpting of his action sequences, which, in earlier films (the gun “battle” in The Life Aquatic, most especially) seemed almost self-parodic.

Originally conceived as a collaboration with Henry Selick (director of this year’s terrific Coraline and 1993’s The Nightmare Before Christmas), Fantastic Mr. Fox follows Roald Dahl’s book: Mr. Fox, family man, but something of a thief at heart, steals from three nasty human farmers, Boggis, Bunce and Bean, brings ruin upon his woodland community in return, and eventually saves his neighbors leaving the farmers befuddled and waiting aboveground for the critters to surface. It’s slight stuff, but Anderson uses it as a springboard for a world in which Mr. Fox’s (George Clooney) incorrigible nature creates complicated relationships with those around him. It runs him afoul of Mrs. Fox (Meryl Streep), who just wants him to settle down and continue working as a columnist for the local newspaper, estranges him from his son, Ash (Jason Schwartzman), who’s awkward and desperate for paternal attention, and endangers the life of his lawyer, Badger (Bill Murray), before they arrive at an unlikely solution to all of their troubles. Yet these descriptions can’t adequately convey the madcap breathlessness of Fantastic Mr. Fox. It’s brief at 88 minutes, but densely packed with incident. Even better yet, as we enter the soggy season at the movies, it’s also great fun.

Contrasting Mr. Fox with the gray psychological ennui of Spike Jonze’s Where the Wild Things Are is somewhat unfair, but still instructive given the similarities in their overall conception (short-form children’s classics tackled by youngish filmmakers with style and personality to burn) and how easily Mr. Fox’s strengths highlight Wild Things’ flaws. Where Jonze, with Dave Eggers’s help (0-for-2 on screenplays at this point, Eggers should just turn back to novels), turned Maurice Sendak’s evocation of the inner lives and fears of children into a muddy, confusing therapy session (do the Wild Things reflect pieces of Max’s still-forming personality or mirror those he left in the real world?), Anderson and Noah Baumbach’s tight-as-a-drum screenplay is perfectly constructed screwball, and its makers’ idiosyncrasies and concerns (fathers and sons, familial resentments, charming man-boys—the Fox family seems like a furry version of the Tenenbaums at times) are carefully built in rather than glommed all over the narrative like molasses. Anderson’s source offers him a little more narrative material to work from, but the brevity and open-endedness of Sendak’s text offers an imaginative filmmaker potential left uncapitalized by Jonze. (Also worth noting: Anderson’s typically “in” musical selections, the Beach Boys, Rolling Stones, etc., far outstrip the hipster drum circle wailing that so aurally mars the experience of Wild Things.)

Fantastic Mr. Fox is so good, and so balanced and so smart, that it’s a slight letdown to find its villains left somewhat caricatured in relation to its finely drawn heroes. But even as its characters’ sculpted neuroses may wind their way towards adult resolutions, it’s important to remember that Anderson is here branching out towards a younger audience—if the sharp divide between heroes and villains is necessary to help child viewers find their footing in a very talented filmmaker’s very particular worldview, then so be it. As usual, Anderson manages to wring heavy emotional resonance from unexpected places: in earlier films it was a rundown barbershop or a rickety submarine, and here it’s alongside a cadre of anthropomorphized Steiff-esque figurines. How he’s accomplished these catharses repeatedly through all of his films, consistently overturning his image as a dilettantish modster, is simple: Anderson cares deeply about things like writing and filmmaking, but most especially he cares greatly about his characters, as odd and mannered as they often may be.