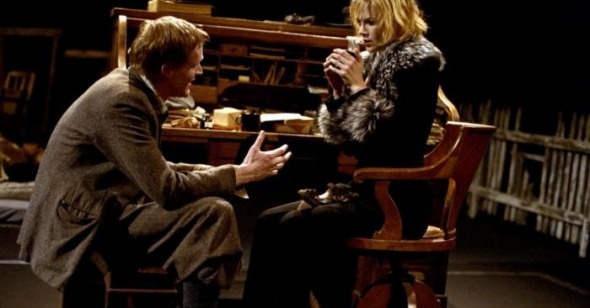 Wolf at the Door
by Michael Koresky

As a moral tirade it‚Äôs overloaded and worn-out‚ÄĒruminations on long-held American mythologies, human bestiality, and Christian allegory ground into a mealy pulp as though from a food processor and served up as cold comfort food for the politically weary. Yet why does this noxious protein shake, chunky with bitter arrogance and tart condescension, go down so smoothly? How does Lars von Trier manage to pull off an experiment so audacious that it makes his prior pain-brings-enlightenment parables seem like mere prologues? Von Trier‚Äôs elegantly angry Dogville, despite its predilection for audience-goosing, is an exhilarating pilgrimage into Darkest Human Nature, as emotionally exacting as we‚Äôve come to expect from the director, and as insinuating as well. As a technical exercise, it‚Äôs unimpeachable; each camera set-up, each metaphysical visual layer, each situational theater gambit validates the form. As with Olivier Assayas‚Äôs demonlover and Gus Van Sant‚Äôs Elephant, an imperfect film nevertheless elicits prime emotional impact‚ÄĒit seems to matter little that none of these films reach that moment when everything coalesces and can be boiled down to a finite, single statement. These films are unwieldy, but how can they not be? The aesthetic choices of these filmmakers dictate the sociopolitical boundaries in which their films function. demonlover‚Äôs techno-apocalyptic cry of moral dissolution gets tangled a bit in kinetic overload, a tenuous balancing act of spy-movie conventions and corporate sterility that alienates many from its message; meanwhile, Elephant seeks new perspectives on the lurking threat of teen violence, yet is neutralized by its Kubrickian art-house gravitas, an ominous crawl through a detached hipster netherworld.

Likewise, Von Trier‚Äôs inability to mask his political intentions in no way diminishes the experience of Dogville, which can be described as creeping terror. Von Trier‚Äôs gimmick here‚ÄĒto set his film in a quaint Rocky Mountain town and then eschew location shooting and even conventional sets‚ÄĒseems to me not so much a Brechtian experiment as a whittling down of themes and ideas into a harmonious melding of image and context. The effect isn‚Äôt distancing in the least; on the contrary, it‚Äôs desperately intimate, metaphorically streamlined, and terribly refined. One could imagine that the hamlet of Dogville is nestled into the crook of a mountainside or perhaps sprouting from the gorge of a valley, but all we see is a black soundstage with chalk outlines where the houses and walls ought to be. By effectively displacing Dogville‚ÄĒwhich consists of one main street, a small footbridge, a bench, and a mound of bulbous rock at the far end‚ÄĒinto a hovering realm of practiced theatricality, von Trier reacts to those critics who laughed off his prior film Dancer in the Dark‚Äôs unconvincing Denmark-as-Pacific-Northwest locations. But it‚Äôs also an effort to make a site-specific text speak for a common purpose‚ÄĒhuman corruption lurks in these shadowy wide-open spaces. A Danish soundstage stands in for small-town America; small-town America, its myriad natural beauties negated by an eternal night-time, stands in for moral vacancy.

But more than mere human fallacy, an admittedly easy target especially for von Trier, who specializes in man‚Äôs inhumanity to man (or more accurately, woman), what‚Äôs on trial here are outmoded American mythologies. Von Trier already had his ‚ÄúHeart of Gold‚ÄĚ trilogy (Breaking the Waves, The Idiots, Dancer in the Dark), in which pure, good characters consistently lost out to territorial hypocrisies and general bad behavior but reached spiritual fulfillment only in the afterlife; Dogville ultimately feels like a true subversion of his own martyrdom fetishes. The Christianity at the core of his films has always transformed his leading ladies into masochistic saints at best, abused playthings at worst. Dogville‚Äôs mystery woman, Grace (ubiquitous and ever-evolving Nicole Kidman) initially seems to possess a heart of gold straight out of Sunnybrook Farm, arriving in a closed-off community and inadvertently spreading cheer wherever she goes, once she‚Äôs accepted by the hesitant townsfolk. From early-century Capra and Thornton Wilder sentiment all the way to Sundance-kissed American indie fare (The Spitfire Grill, anyone?), the conventions have proven steadfast, that main street USA opens its arms to outsiders, that community provides the backbone of a strong, proud nation. Yet there are Biblical implications here‚ÄĒthis time von Trier dredges up Old Testament furies instead of New Testament theologies. Ultimately, Kidman is less martyr than avenging angel‚ÄĒand a hard rain‚Äôs gonna fall.

If there doesn‚Äôt seem to be anything truly subversive or unique anymore in delving into the ‚Äúdarker side of Americana,‚ÄĚ considering the politic at play in the works of David Lynch and his seemingly endless bunch of imitators, then it‚Äôs the approach that‚Äôs revelatory. Von Trier‚Äôs borderless homesteads reveal the close-knit neighbors as a hop, skip, and a jump away from mob mentality. Von Trier‚Äôs back-bending cynicism, his attempt to peel back the layers to reveal the snarling beast beneath may be forced, but his grim accounting of mass conformity is frighteningly persuasive. The denizens of Dogville, knowing that Grace is wanted by the law, all begrudgingly agree to hide her within their walls (with no literal walls to speak of, this of course eventually becomes an impossibility), yet gradually turn against her. When Kidman is defiled by a particularly brutal neighbor, the walls are gone, the rape visible to all, yet they‚Äôve turned a blind eye. With nothing but dead air as a substitute for visible boundaries, the notion of neighborhood is condensed into something more like a conspiratorial cluster. Von Trier dramatically captures the selfishness and bottom-feeding that make each resident‚Äôs individual rejection of Grace a reflection of a warped communal stance. He draws you in to every minute gesture, showing that conformity occurs inevitably, gradually, terribly. And as in Arthur Miller‚Äôs The Crucible, a sort of spiritual inspiration, things begin to spin out of control due to the smallest instance of instinctual burgeoning sexuality, from one of the town‚Äôs prepubescent residents. ‚ÄúSpank me‚Ä¶‚ÄĚ he pleads. And the rest is history.

The rest of the Dogville residents are played by a seemingly endless parade of supporting actors with serious indie cred (Patricia Clarkson, Jeremy Davies, Chlo√ę Sevigny), Euro art-house standbys (Stellan Skarsg√•rd, Jean-Marc Barr), and bona fide Hollywood stars (Lauren Bacall, James Caan). Their relatively brief screen time registers as less an act of nose-thumbing disdain for American idolatry than as an effective visual tactic. Silent, but often noticeable in the corner of the frame, Bacall and the others becomes blind witnesses‚ÄĒthe eyes of judgment from all sides. Certainly each player wants a share of the spotlight, a way to gain narrative supremacy; their resentment of Kidman attains a meta-edge. Breaking from the herd, albeit temporarily, Paul Bettany plays Grace‚Äôs defender and would-be paramour, Tom Edison Jr. (despite the namesake, von Trier cynically gives him, this Edison invents nothing). Bettany‚Äôs splotchy, tremulous, self-motivated betrayer is one of Von Trier‚Äôs most satisfying creations, yearningly romantic and opaquely idealistic at once, an indecisive ‚Äúidea‚ÄĚ man with no follow-through. The director would undoubtedly label this spineless string bean a quintessential American. Yet he comes across as more a classical Hamlet¬≠esque pragmatist, all talk with no room for non-intellectualized passion, whose wishy-washy behavior leads to the misfortunes of others as well as his own.

If von Trier at times bounds over and shortchanges many of his characters, he is nevertheless a master storyteller, a devious spinner of yarns. He can draw you in ever tighter until you realize, along with his female protagonists, that the world is closing in from all sides. Here, a gorgeously woody tableau of Nicole Kidman, attempting to escape to freedom by lying in the back of a flatbed apple truck, a transparent cloak draped over the frame, expresses a claustrophobia unbearable in its implications. Grace‚Äôs sleeping figure, framed by boxes of spilling apples, becomes the center of a Joseph Cornell‚Äďlike architectural expression: Kidman might as well be trapped under glass. Each decision she makes (to stay, to leave) seems to further doom her.

Likewise, Bj√∂rk‚Äôs unnervingly wrongheaded murder of the thieving cop in Dancer in the Dark was a turning of the screw of the highest order; it sealed her fate. Yet that film‚Äôs vague political critique and anti-capital punishment statements seemed to befall its circuitous opera/melodramatics almost by happenstance. Here, von Trier progresses to the next level, letting his themes of self-aggrandizing American identity and human weakness commingle evenly, neither achieving total narrative dominance. Perhaps this is why so many are so alienated by it: without a strong central thesis, what‚Äôs left are moods, occasional epiphanies, and rushes of primal emotion. Von Trier may be accused of blatant anti-Americanism, yet it‚Äôs not Americans under attack in this passion play, but the politics of a mythology from which a current political mindset feeds. The plot trajectory is swift and simple: American villagers take in an outsider, yet their policies of bourgeois self-interest eventually abandon and alienate the Other. In von Trier‚Äôs world, this paves the way for apocalypse.

I don‚Äôt feel that Von Trier means to justify the violent retribution that climaxes Dogville‚ÄĒI believe he sees it as a reflection of an ongoing human struggle in which every shattering world event has its nexus in human instinct. Not the seeds of terrorism, per se, but of suffering, surely. The closing Walker Evans¬≠‚Äďesque photo montage of sad-eyed Depression-era migrant workers and fringe dwellers is the clincher for most audience members. At the NY Film Festival, it either caused remarkably spontaneous boos or impassioned applause. Perhaps the knee-jerk response is appropriate, considering the film itself is a knee-jerk response to the state of the world. If Dogville is nearly bursting with discomfiting ideas and quandaries, the climactic slideshow is the rubber band just barely keeping the plastic bag from leaking all over the floor. Is von Trier, who anachronistically, pointedly scores the sequence to Bowie‚Äôs ‚ÄúYoung Americans,‚ÄĚ trying to do anything more than merely provoke, to offer up Tom Joad as simply another nefarious fiction? Or is the unorthodox mix of up-tempo pop irony and the bedraggled faces of legions of haunted American figures an attempt to reconcile American experience of the subjugated masses with the myths that gloss over their plight? Either way, here the stagy artifice finally melts away. Indeed this is far too heady a close for a film so skeptical of human decency, and von Trier comes off as both actively disingenuous and lazy‚ÄĒbut difficult to pin down. Working with hurried brilliance, he has, from his safe distance, insinuated his way into the folkloric past, and demonstrated its ability to set the groundwork for the political present.