Rebels of the Neon God 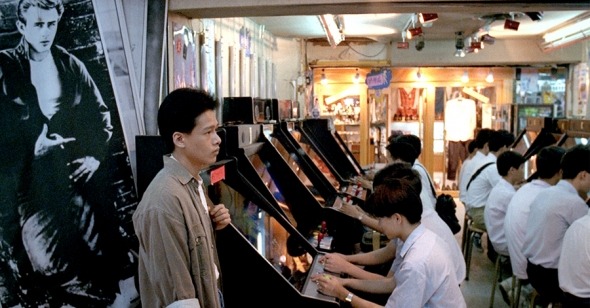 Only Connect
Nick Pinkerton on Rebels of the Neon God

Quietly, Tsai Ming-liang has emerged over the span of the last decade as something like the Radiohead of the art house: damn near critic-proof. His prominence is no longer limited to a few devoted film lovers; at this point even my grandfather in New Smyrna Beach, Florida, has seen Goodbye, Dragon Inn. And maybe it's my inherently priggish and contrarian nature, but as soon as the fairly unanimous positive reviews for the theatrical release of Dragon Inn came out as testimony of Tsai's growing eminence, I started to distrust my admiration for his films. They have, after all, been the departure point for some really embarrassing, self-congratulatory critical dither, prompting dilettante-ish phrases like “delicately orchestrated tableaux of touch-and-go souls.” (My own words, in fact, written for this very august publication) And my newfound apprehensions were only exacerbated when, in correspondence with a film lover whose opinions I greatly value, I rolled out my stock categorization in defense of Tsai, calling him a “funnier, sexier Antonioni.” Her lethal reaction: “You think Tsai's funny? Really?” I didn't think much of it at the time, but that incredulous “Really?” left a lump in my gut. Was Tsai an actual cut-up? Or were his frugally arranged sight gags only good for those tidy, appreciative liberal arts “laughs” that ripple over a theater at a Chaplin retrospective, as awkward as a rock critic on the dance floor?

My misgivings are halfway intact when I study the trajectory of Tsai's filmography; I see a steady movement in style and in subject that points toward stagnation rather than refinement. But when I think to my maiden viewing of Tsai's first feature, Rebels of the Neon God, released in 1992, I can only remember Susan Ray's introduction to I Was Interrupted, a collection of husband Nicholas's speeches and writings, where she discusses the trepidation she felt at first viewing her spouse's more famous Rebel: “I did not want to like Rebel Without a Cause—everyone liked Rebel, almost a contradiction in terms-but how had Nick known about the claustrophobia of suburban life and what it was like for someone like me growing up?”

There's nothing haphazard about the Rebel Without a Cause reference in this context. Tsai's movie even begs the juxtaposition: at one point Tsai mainstay Lee Kang-sheng stands in front of an arcade, a poster of James Dean as Rebel's Jim Stark posed just behind him. This image—Lee and Dean outside the arcade—tidily conflates the movie's namesake into shorthand. The neon gods are the glowing banks of games (perhaps the pink-and-purple blacklit vortex of the roller rink where Wang Yu-wen works is also one of their temples), the rebels, so-called, are the young, rootless petty thieves for whom Street Fighter II is a way of life. Progress in home gaming technology has, by and large, destroyed this token-driven arcade culture which peaked in the early 1990s, but Rebels preserves the image of these packed repositories of listless kids, the likes of which hasn't been seen since (though you can still find some lost souls in the Dance, Dance Revolution machines in Chinatown's Mott St. arcade). The arcades in Rebels are an unobtrusive but constant presence, the setting of several scenes and the nexus to which the characters always return; one gets the discreet impression that most of the film's cast are on more intimate terms with say, the Brazilian mutant Blanka, than they are with one another. Any onetime sulky teenager who's used the arcade as an escape hatch from an interminable family vacation, racking up more wins on Golden Axe than any human being has a right to do, will be astonished to recognize their misspent youth.

Having grown up in Cincinnati, literally half a world from the Tsai's Taipei, I can only marvel—as Susan Ray marveled—upon Tsai's accomplishment. Rebels is, in short, the most spot-on portrait of the fluorescent mall culture of a decade past, and of its attendant adolescent anomie (the characters in Rebels seem to be mostly around 20, but boy does this movie feel eighth grade to me), that I have ever seen, and few of the setting's fetishes, trinkets, and images are untranslatable between hemispheres. The cut-off shorts, the bluffed arrogance, the gaudy costume jewelry, the weird, religious parents, the hours of Tetris, the lighter burns on skinny biceps, the “What are we gonna do with her?” drunk girl on rubbery legs, and the tee-shirts tucked into powder-blue denim are all present, and all adorning a deep, lugubrious emotional base.

The thing that facilitates Tsai's widespread foreign acceptance is this unsurpassed fluency in the universal language of melancholia; he works with the same from-the-gut lachrymosity that can make both L.A. barrio kids and chubby Goth girls from Warsaw flood the stage, eyeliner streaming, at Morrissey concerts. Tsai's films engage a whole mythology of distance and doldrums—one so inclined can extrapolate psychological echoes of Tennessee Williams, Dostoevsky, and Charles Schulz's Peanuts (note the prominent Woodstock throw pillow) from Rebels, which has digested an entire pantheon of art-of-the-alienated. Returning to the meeting of Lee and Dean: the comparison is affecting, even as it seems somewhat ironic. The sallow-chested, self-absorbed Lee certainly has nothing of Dean's sexy-bashful purr; Neon God's young protagonist is more akin to that weird, passive-aggressive geek-among-geeks, Sal Mineo. So is Ah-Tze (Chen Chao-jung), the punk whom Lee stalks, the should-be big-brother Jim to his Plato? Is Tsai's narrative a soggy, slow contraction of Ray's suburb-opera mythos? These questions identify Rebels as a distinctly cinephilic study in rebellion, focused on an isolation that isn't isolated but steeped in tradition. Lee and Dean's encounter here, like Lee's tender engagement in What Time Is It There?—through the conduit of a TV screen, with Jean-Pierre Léaud in The 400 Blows—belies Tsai's ambitions as an international chronicler of the downcast, arranging secret commiseration between the beautiful mopers—hard-pressed to make basic human connections—across cities, continents, and decades.

Of course when one takes doleful stuff for subject matter, it's still easy to play into rather than play around with depressive clichés. Rebels has enough of these missteps, scenes that sacrifice plausible humanity towards maintaining the clogged air of ennui: after one of those joyless, indifferent couplings that seem to litter art house cinema, Yu-wen's departing partner, face off-screen, shoves a business card in her hand, leaving her with the sweet nothing “Are you interested in buying a car?” It's just bad stuff, recognizable from a zillion “moody” student films that confuse slow with smart and boring with brooding; thankfully, Tsai's universe of estrangement is usually canny enough to avoid these po-faced, passionless moments.

I wonder what I would've made of Neon God—a true formalist juvie picture-at fourteen; how would I have processed its blasé interludes and that strange coexistence of detachment and tender engagement? It's certainly the antithesis of something like Kids, which twerp punks like myself all got off on; Larry Clark's film, or the hysterical Thirteen, are teenage from the inside out: young lives spazzed-up in constant hyperactivity, as calculatedly provocative as flaunted belly-button rings. This isn't necessarily a slight, but these are movies which see their young characters as teens might like to see themselves, or maybe as they dosee themselves after a few whippets chased with a bottle of Robitussen DM. The camerawork in Rebels is pretty sober stuff, though Tsai is more expressive here than in later films, allowing us a certifiably badass credits sequence where Ah Tze and Ah Ping (Jen Chang-bin) glide their mopeds, like two sullen Gods, along Taipei's blue overpasses, accompanied by the film's loping theme.

And so a cockroach impaled on a compass becomes a minor character, an elevator that always stops on the wrong floor plays like an omen, and an estranged father's sudden offer to go to the movies seems to carry a suggestion of salvation. Rebels also marks the premiere of Tsai's hang-up on the expressive dimensions of water with Ah Tze's flooded kitchen, walls rippling with ethereal reflections. The metaphor linking a clogged drain to a stifled existence is fresh, clean, and direct. I know of few images more moving than when a phone call and a glimpse of potential warmth suddenly recedes the creeping tide.