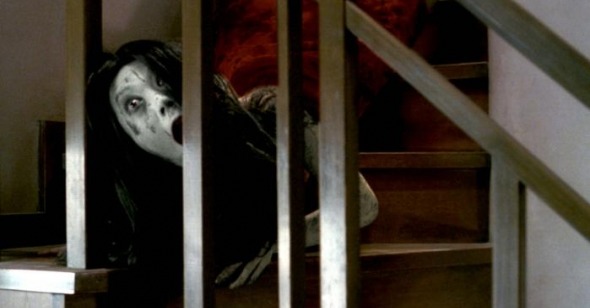 Me and You and a Kid Named Boo!
by Adam Nayman

When a film as bad as The Grudge, Takashi Shimizu's remake of his own 2002 Ju-On, makes so much damned money ($40 million in its opening weekend), it's pertinent to ask ‚Äúwhy?‚ÄĚ‚ÄĒ preferably bellowing from one's knees, arms open to the dark and indifferent sky. (The prostrate body of your partner, felled by Mendoza just one day before his retirement and subsequent sailing trip around the world on the Live-4-Ever, is optional.) The obvious answers are 3,000-theatre market saturation, a decent trailer (with Sam Raimi's name on it as a producer), and a steadily encroaching lack of public discretion. But there's also the lingering appeal of J-Horror, which broke on these shores with Gore Verbinski's surprisingly successful The Ring. That film's source material, Hideo Nakata's icy, dread-ridden Ringu, was probably the crown jewel of Japan's contemporary genre movement. Ju-On, released a year later, was the de facto runner-up, and thus next in line for a Stateside transfer. Completing the trifecta early next year will be Walter Salles‚Äôs dire-looking remake of Nakata's excellent, Changeling-biting Dark Water.

I admit to a soft spot for the original Ju-On, or at least the version I've seen: like The Ring before it, The Grudge is derived from a Japanese horror-film franchise encompassing film, video, comic books and, in all probability, vending machines. Seeing every incarnation of these tales is a task for genre historians or geeks, people with much longer attention spans than my own.

The Ju-On feature proper was an endearingly clunky inventory of haunted house clich√©s, predicated‚ÄĒlike Ringu‚ÄĒon the notion that nothing could be scarier than pale Japanese ghost girls crawling at a slow pace towards the camera, their faces obscured by tangles of stringy black hair.

These instincts proved to be mostly correct. Ringu is the better film, and its longhaired bogey-chick's appearance is a genuine pimple-raiser. But Ju-On had its moments. Most of them came courtesy of its other featured demon, a shirtless and wide-eyed little boy in pancake makeup who meowed like a cat at anyone stupid enough to enter the house where his spirit dwelled-the house where he and his mother were apparently murdered by their father in a crime of passion, and where all three (plus a black cat, who may or may not be the boy in shape-shifting form) have been confined, to stare moonily into space and frighten any interlopers or prospective buyers to death.

Said shirtless dead cherub is back in the American remake, and so is his crawling long-haired sister, and so is their bizarrely designed living space. (Affordable tract housing by Escher.) Their malevolent powers have not been compromised. We're still in Japan, too, the casting of Hollywood folks like Sarah Michelle Gellar, Clea Duvall, and Bill Pullman facilitated by the introduction of cross-cultural education and study-abroad programs into the story's diegesis. What's absent, this time around, are any good scares at all. This, more than an absence of sticky themes or any innovation, is what makes The Grudge irrelevant‚ÄĒwhen all a film is supposed to do is provide jolts and then doesn't, it decomposes from trash to offal. And awful.

This awfulness does not owe to a difference of approach. The original's Byzantine plot construction has been retained, with Sarah Michelle Gellar's perpetually spooked exchange-student home care worker providing a through-line between shock vignettes. Shimizu's style remains unchanged-long tracking pans that force our attention to the rear of the frame, followed by unexpected intrusions into the foreground. And the money shots from Ju-On‚ÄĒthe staring face under the covers, the Exorcist-redux staircase spider-walk‚ÄĒare here, except with less visible black eyeliner.

Maybe it was the black eyeliner that worked the first time around-happily, and crucially, it was hard to take Ju-On seriously. The film worked best in a group setting, where people could laugh at themselves and each other for being conned into one more blatantly telegraphed jump-scare moment. Whatever talent Shimizu has lies in entreating the audience to embrace, and be tickled by, their own willing gullibility‚ÄĒJu-On was humorless but nevertheless gave the impression of being a hoot.

Not so The Grudge. The dread solemnity that made Verbinski's The Ring so refreshing, coming as it did after the final wave of self-referential teen slasher pictures, plays very poorly here. The film is so airless, so groundlessly sure of itself, that having a good time is out of the question. (Even Ted Raimi's cameo has been drained of enjoyment-I guess it's funny that he's wearing the same clothes from Spiderman 2. Take what you can get.) The Grudge is a grind‚ÄĒit feels long even at a padded-out 90 minutes. This despite the addition of narrative intrigue-while the plot unfolds in the same disjointed manner, the screenplay has been tweaked to clarify the ghouls' motivations, in life and in death.

This clarification involves a prologue, absent in the original film, in which Bill Pullman flings himself nonchalantly off a balcony. Regardless of its ultimate import to the story (negligible), the scene works because it locates itself squarely in the plausible-a guy gets out of bed and walks onto his balcony‚ÄĒand then throws a change-up. Shimizu must understand why the scene works, because he directed it. But he steadfastly refuses to throw that pitch twice. And so we're treated to scene after scene of young women poking blindly into haunted corners, before being jumped and dispatched.

We don't care about any of them: this dissociation was by design in Ju-On, which had the faint whiff of millennial nihilism about it, but merely accidental here. Gellar is privileged with a number of close-ups in which the terror creeping across her face is meant to bind her to us, and she's been given a sacrificial lamb of a boyfriend whose job is to finally, in death, incite her to Buffy-ish feats of undead ass-kicking. Too little, too late.