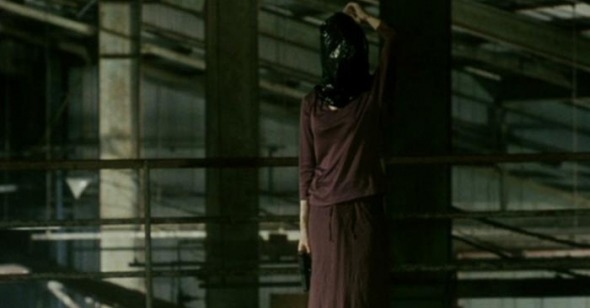 Ghost in the Machine
by Matthew Plouffe

After collecting dust for the last three years in the infamous annals of unseen work that has come to define for many the once-monolithic Miramax, Kiyoshi Kurosawa‚Äôs Pulse will finally see its overdue stateside release at the hands of smaller Magnolia Pictures this summer. Were it not for the claque of American film lovers touting Japanese Horror (or ‚ÄúJ-Horror‚ÄĚ) as the go-to genre for anyone in search of real scares, Pulse would most likely have moved straight from the studio‚Äôs shelf to Blockbuster‚Äôs, but since the relative success of both original foreign-language and remake releases of films like Hideo Nakata‚Äôs The Ring (Ringu) and Takashi Shimizu‚Äôs The Grudge (Ju-On), distributors and horror-lovers alike have been scouring Japan‚Äôs output for whatever they can get their hands on.

It‚Äôs always difficult to predict the future of a film like Pulse in a market like the one we‚Äôve got here; even if it did turn out to be another Ringu or Ju-On, managing to remain on screens for a few weeks, Kurosawa‚Äôs unforgettable investigation of techno-isolationism in contemporary Tokyo will likely not be recognized by the general filmgoing public as anything more than a little more J-Horror hoopla. Such is the plight of Kiyoshi Kurosawa, whose name is often found beneath headlines like ‚ÄúLions Gate has acquired worldwide distribution rights, excluding Japan, to producer Taka Ichise‚Äôs six-pic horror package ‚ÄėJ-Horror Theater.‚Äô‚ÄĚ (Variety, May 14, 2004). In truth, a 2001 retrospective of his work, which preceeded the first legit DVD release of his supernatural crime thriller Cure (1997), gave audiences the rare opportunity to see Kurosawa‚Äôs oeuvre for what it really is: varied and unique‚ÄĒconceived a world away from the J-Horror Jamboree marching down Hollywood Blvd.

To the growing cadre who‚Äôve immersed themselves in the current landscape of lesser-known Japanese cinema (in this case, mainly through bootlegged copies of his undistributed work), Kurosawa‚Äôs films remain as relevant and as highly anticipated as those of his internationally-praised contemporaries Takashi Miike and Takeshi Kitano. To fans, Pulse is just one more remarkable film in a masterful oeuvre too long overlooked, due in large part to the fact that his often plodding, always enigmatic films are an acquired taste. While much of the filmmaker‚Äôs work is marked by an atmosphere that waffles between eerie calm and thick anticipation, films like 1999‚Äôs Charisma and 2003‚Äôs Bright Future combat all clich√©s by settling themselves into spaces that seem to exist between genres. There is a sense that these works simultaneously approach various styles but never commit to any single one. Arguing that Charisma and Bright Future (or 1998‚Äôs Serpent‚Äôs Path and Eyes of the Spider) aren‚Äôt horror films proper seems reasonable until one considers the considerable number of terrifying moments dappling each. Is it a horror picture? No. Is it horrifying? Oftentimes, yes. Therein lies one of the innumerable beauties of viewing the work of an artist less interested in offering his grasp of genre through imitation than through reconsideration and subtle provocation. Therein also lies the irony that Kurosawa is essentially another face in the crowd of ‚ÄúAsia‚Äôs New Horror Auteurs,‚ÄĚ that nameless group of directors best known for how many films they‚Äôve had remade by American companies. If there is anyone who could see the horror genre through an evolution, Kurosawa could, and Pulse might forever be known as the first of his work to tackle a genre head-on.

From a boat far out to sea, a young woman recalls the beginning of the end. After tracking down a friend who has been missing for days, he unexpectedly commits a bizarre suicide/disappearing act which leaves a stain on the wall. His friends find a disturbing image embedded in a computer data file he leaves behind while at the same time, another teenager‚ÄĒfar less computer savvy‚ÄĒslowly figures out something strange is going on when his computer starts up by itself and asks if he wants to see a ghost (remember, Teen Horror Flick). One by one, the population of Pulse begins dwindling, inexplicable deaths proliferate, puzzling images plague computer screens, and phantom apparitions wander the hallways of abandoned buildings marked by doorways lined with red tape. As the teens grasp for answers to all of this, Kurosawa‚Äôs techno-phobic thematic strain threads their searches together with particularly prescient power. There is here an examination of human interaction in the age of e-friends and hardwired communication. Indeed, the ghosts inhabiting PCs start to outnumber the citizens of Tokyo, and the two remaining protagonists search to grasp at whatever reality they‚Äôve got left. One of the film‚Äôs most stirring moments occurs when the girl rests her head on the other‚Äôs shoulder in a tender, simple moment which suddenly seems some kind of brute physicality.

Kurosawa lets his narrative twists take a backseat to aesthetic and psychological endeavors; though the plot lines become more fascinating to discuss after each viewing, it is the filmmaker‚Äôs handle on the intricacies of scaring audiences that makes Pulse such a remarkable work, and like all of his films, the complex narrative is anchored by a highly controlled visual style that delicately palpates the liminal space between corporeal and supernatural. Though its greatest triumph may be that it manages that simple Teen Horror Flick ethos‚ÄĒthe only thing easily grasped in one viewing is the filmmaker‚Äôs inimitable vision of modern-day Japan, as bleak as it is utterly horrifying. Pulse is a film for those who never bought into The Ring‚Äôs contrived formulas or The Grudge‚Äôs smurf-tot antics, who believe American pop culture has missed the boat altogether, extolling the same old repackaged horror tropes again and again: grating hyper-editing, silly shock scares, and the kind of hollow high-concept that leads jaded filmgoers to check out moviespoiler.com in lieu of wasting 10 bucks. It‚Äôs a film for those who believe that ideas are scarier than severed limbs, that art and horror aren‚Äôt such strange bedfellows; the first film worth all of the J-Horror hype, trumping its peers in artistic value and scare-counts while engaged in a radical rethinking of what terror really is. That Kurosawa is also engaged in an examination of contemporary (dis)connectivity in today‚Äôs e-society is icing on the cake.

Nothing less than a master class in terror, the film employs deceptively simple digital imagery to compliment an unmatched attention to all-but-forgotten techniques for frightening viewers. Foggy visuals created with soft shards of light and hanging transparencies are the foundation of Kurosawa‚Äôs deceptive mise-en-sc√®ne, which often reveals itself as labile, containing more than what one sees at first glance. The film‚Äôs most memorable shocks come not from sudden bloody close-ups but from the revelation that what seemed a shadow has apparently come to life. Long after you want to look away, the unnatural movement and inscrutable physical appearance of Kurosawa‚Äôs ghosts haunt audience and characters alike; when it seems they‚Äôve given up, the eerie, pixilated apparitions press on at a snail‚Äôs pace like some postmodern manifestation of Romero‚Äôs living dead. Most remarkable in his arsenal of terror tactics is the filmmaker‚Äôs ear for aural effect, and Pulse utilizes the art of sound design to its fullest capabilities. What David Lynch has taken to new heights for atmosphere in his scariest work Kurosawa here scatters to fine and pointed effect. If it is the master filmmaker who understands that sound is the scariest element of all, Kiyoshi Kurosawa is without question at the head of his famed J-Horror class.

But as The Ring‚Äôs U. S. remake franchise powers on, one wonders whether the J-Horror phenomenon will amount to anything more than an unabashed remake-fest with less and less regard for the original works from which they are derived. The catch-22 of the remake may best be exemplified by the positive result‚ÄĒthe source filmmaker‚Äôs name and nationality being mentioned in refrence to the remade work‚ÄĒand the contrasting fact that most filmgoers are unlikely to see the original film. (Though in the case of Ringu and Ju-On, both films were released theatrically in their original forms, the audiences paled in comparison to those turning out for the blockbuster remakes.) On the other hand, in the case of films like Ringu or Ju-On, the losses don‚Äôt seem as great; ultimately, the original works didn‚Äôt offer much more artistry than their American counterparts, and one could argue for the concurrent PR campaign granted Japanese film that it might never have had. In the case of Pulse, however, it‚Äôs hard to feel the same, as there seems a lot more at stake. Knowing that a Wes Craven remake was one of the hot pre-sales at Cannes this year is likely to make a few more stomachs turn because Pulse is a work that transcends not only the J-Horror phenomenon but the horror genre as we know it today. There is in this one work, enough artistic content and progressive craftsmanship to open eyes across the globe to what could be the future of horror filmmaking. Thanks to the Brothers Weinstein, it‚Äôs been sitting in storage for three years; thanks to Magnolia Pictures, audiences will finally get a chance to lay their eyes on an early masterwork of the 21st century.

It may be a long while before general audiences turn to searching out original foreign-language versions of the remade films they love. It‚Äôs common knowledge that the very term ‚Äúforeign film‚ÄĚ has a lot working against it‚ÄĒa regular comment made in reference to the subtitled category is ‚ÄúIf I wanted to read, I‚Äôd pick up a book.‚ÄĚ In the end, one of the most exciting things about a film like Pulse is that Kurosawa‚Äôs scare tactics ultilize the medium‚Äôs particular facilities‚ÄĒsound and image rather than dialogue‚ÄĒto make a lasting impression. One hopes that the universality of fear and the desire to be scared will draw audiences, and that the filmmaker‚Äôs ability to appease their appetites without the use of words will keep them in their seats, searching out his work and that of his contemporaries, for a lifetime. In the meantime, we can only hope that Kurosawa‚Äôs few appearances on the festival circuit will open distributors‚Äô eyes to the appeal of some of his earlier work as well, and that audiences in search of real scares will make a plea for more for more J-Horror in its original form. If Kiyoshi Kurosawa is any intimation of what‚Äôs out there, we all might run across a few great filmmakers along the way.