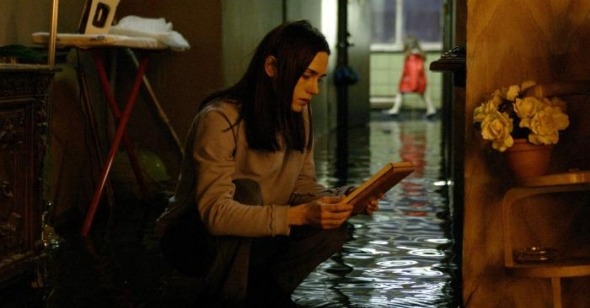 Up the Spout Again
By Kristi Mitsuda

Though it tends to be critically assumed that American adaptations are inferior to the originals of foreign origin, I’ve long felt this bias to be undeserved. While Hideo Nakata’s trumpeted J-Horror Ringu (aka The Ring) is hideously banal in execution (the Japanese version feels more Hollywood-bland than the remake itself) if brilliant in its tapping into urban-legend spookiness, Gore Verbinski improves upon it with mildewed colors and nightmarishly lurid visualizations. Likewise, though I’m devoted to both versions of Open Your Eyes (and I’m fairly certain I stand alone in this), Vanilla Sky carries a slight edge over Alejandro Amenábar’s Abres los ojos: Cameron Crowe’s injection of a pop cultural consciousness and his acknowledgement of a world in which movies and music so thoroughly permeate our notions of romantic love burrowed inside of me and nested there. This is a long way of saying I’m not particularly predisposed towards prizing the primary over latter incarnations a story may take. But this American habit of regurgitation via a characteristically over-the-top sensibility works well only with certain material; in a horror movie where its antagonist assumes the abstract form of water, such a penchant for more-is-more has ruinous results. And where the original shows up its offspring so starkly, compare-and-contrast impulses are unavoidable.

Under the direction of Walter Salles (The Motorcycle Diaries), Dark Water lifts narrative basics from (yes, the same) Nakata’s model and then proceeds to dilute it of the elements which make it compelling in the first place: namely, a capacity for mysterious suggestion over heavy-handed obviousness. True to generic form, the update goes in for shock and awe, renouncing the quieter dread J-Horror (as in the existential terror of Kurosawa’s Pulse) occasionally allows to crescendo into a disquieting unrest. In the original (itself imperfect though, next to the 2005 edition, a masterpiece), the slow supernatural flooding of an urban apartment accumulates a truly menacing tenor. Salles extracts aspects of the Japanese director’s more evocative visual schema—aerial shots and sporadic soft focus—but mitigates much of its subdued apprehension with a heightened score meant to scare (more likely to elicit guffaws than gasps when it accompanies slowly-dripping water from a bedroom ceiling) and close-ups on the gorgeous wallowing of Jennifer Connelly as newly-divorced Dahlia. Like remake counterparts The Ring and The Grudge, the Hollywood translation clings to the visual iconography—creepy children and feminine faces obscured by long, dark hair—and ditches more inventive aural atmospheres. Gone are lingering shots trained simply on the sight and sound of unrelenting falling rain and, in place of long stretches of naturally foreboding silence, this rendition inserts bad mother-daughter bonding banter.

As a friend exiting the movie put it: “I thought I was seeing a horror movie, but it turns out I stumbled into a woman’s picture.” Dark Water sets itself apart from others in the genre in its focus on mother-daughter relationships and postulation of potential psychosis on the part of its protagonist. That the strange leaks and footsteps sounding in the allegedly vacant apartment directly above might be emanations of Dahlia’s overwrought imagination rather than intimations of a haunting introduces an engrossing angle. The script feeds into the idea by placing an emphasis on the character’s debilitating migraines and perennial pill-popping, compounded by flashback sequences (notably, Dark Water opens in the past rather than the present, with an image of young Dahlia waiting in the rain for her mom) which inform the audience of a history of neglect, which might affect her parenting skills.

Due to a colossal narrative misstep, however, a thoroughly American construct—the imaginary friend—comes into play and detracts from the power of the film’s psychological underpinnings. The original preys much more on conceptual inklings that the damaged mother’s issues of abandonment—accentuated by the near-hysteria of Hitomi Kuroki’s performance in the Japanese entry—may be contributing falsely to her sense of reality; accordingly, she’s more privy to the spiritual knockings. But here, her annoyingly precocious daughter, Ceci (Ariel Gade), becomes the main conduit to the supernatural by way of the imaginary friend device, and so the hypothesis put forth, that the uncanny occurrences may be Dahlia’s paranoid psychic manifestations mixed up with memories, doesn’t gel; it’s never a question that something from the beyond is responsible.

Something else lost in the shuffle is the sense of the mother and daughter as a team, separate from the rest of the world, banded together against the reigning disconnection of big-city living. With an impressive supporting cast —John C. Reilly, Tim Roth, Pete Postlethwaite, Dougray Scott, and Camryn Manheim all play no more than expository characters in the original—the camera pays far too close attention to the actors, rejecting the de-personalized extreme long shots which suffuse the first film with crushing doom. There is, however, one casting choice wherein the remake deviates from its forbears to interesting effect: the same child actress who plays vengeful spirit Natasha (Perla Haney-Jardine) also plays the young Dahlia. Whereas the classic denouement of American slashers resides in a triumphant “final girl,” the female protagonists of J-Horror rarely escape so unscathed. The decision to cast one actress in dual roles punctuates this: Concluding with Dahlia’s literal death at the hands of her younger self imparts a figurative suggestion that she’s been spiritually consumed by her childhood demons.

Relocated to New York City, Salles’s Dark Water works most effectively as an allegorical treatise on the horrors of renting in a market so unbalanced by demand that the breakup of a two-income household necessitates relocation by both parties. And that the only apartment a working single mother can afford to rent in the vicinity of Manhattan is a dump on Roosevelt Island, replete with a sketchy landlord and super, is scarier than any ghost-child.