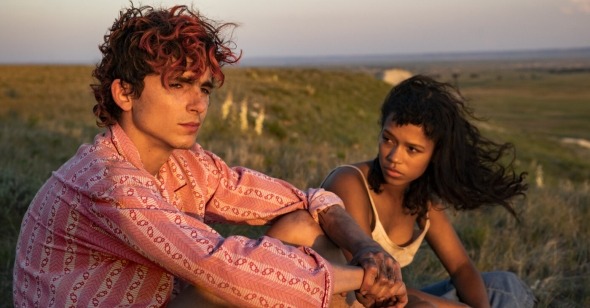 Eat Me
By Justin Stewart

Scaling back from the 152-minute bloat of the ill-advised style wallow Suspiria, director Luca Guadagnino has “settled down” with a relatively low-key, ambling road movie, albeit one nearly as gore-drenched as its predecessor. For its costar Timothée Chalamet, too, it’s a little breather between Dune monoliths, something of a return to the calmer, character-driven strains of Guadagnino’s Call Me by Your Name, though, again, it should be stressed, one sodden with gallons of carnage and cannibalistic flesh-rending. Guadagnino, who also co-wrote and directed the TV miniseries We Are Who We Are in the interim, is, like his countryman Paolo Sorrentino, not usually a filmmaker content to disappear into work-for-hire.

But Guadagnino has made a decision to recede into near-anonymity here, with only the occasional surfacing of his trademark whip pans, flamboyant zoom punch-ins, wandering shots of incidental ephemera, and references to culture both high and pop, along with momentum-halting monologues delivered by returning actors. In his attempt at a more stripped-down style, the Italian director, working with a new cinematographer (Arseni Khachaturan), grasps for a homespun Americana that feels alien to his natural artistic instincts. It is, of course, fine to make calculated career moves, but the effort is palpable. Chain stores and magic-hour cornfields have replaced the sumptuous villas and palazzos of previous work, but the most noticeable departure from his somewhat cringingly self-dubbed “Desire Trilogy” films (I Am Love, A Bigger Splash, Call Me by Your Name) might just be its characters’ far lower tax brackets.

Bones and All is adapted from a YA novel by Camille DeAngelis (also the author of fantasy novels, travel books and “practical philosophy” tomes for adults), so it’s not unfair to see the film as Guadagnino’s Twilight. Here, cannibalism rather than vampirism is the favored protean allegory for outcast rootlessness, codependency, hormonal youthful yearning, and antsy wanderlust. Mostly it’s about not belonging, with cannibalism stepping in for commoner differences. The focal point is Maren (Taylor Russell), a high-school-aged woman living an itinerant existence with her father (André Holland, soulfully tired) up and down the U.S. eastern seaboard in the early nineties. The opening scenes featuring the father and daughter are some of the film’s coziest and authentic-seeming, lit with a yellow glow and with the din of background news reports, including Rudolph Giuliani discussing the 1992 Michael Dowd NYPD drug-ring scandal, setting the time period. (Trendy giant-letter-font titles for states and months identify those changing specifics.)

The familial warmth lasts only a short time before things escalate at a manicure party with Maren and some of the cool girls in her new town; bonding with one of them under a glass table, Maren nuzzles in close and then chomps off a finger (giving us the first of many high-in-the-mix crunching, slurping, oozing aural FX). This incident turns out to be a last straw for her father, who abandons her after their next move, leaving behind a cassette tape laying out for Maren (and us) a backstory that includes a mother with similar dietary habits and an eaten babysitter.

On the road, where she’ll remain for the rest of the movie, Maren is sniffed out by Sully (Mark Rylance), a slow-talking old cuss who immediately pegs her as an “eater” and offers her a chance to partake in the body of a fatally injured older woman. Rylance is given a long leash, sucking in spittle and drawling out maxims like “Life’s never dull-y with Sully!” and vampire-like “rules,” including that their kind are to “never eat an eater.” Sully’s lengthy ponytail turns out to be a rope of dinner-victim mementoes, and Maren is right to soon bolt. While it can be fun to watch an actor go broad and weird, this is at least Rylance’s third such oddball (after Ready Player One and Don’t Look Up), and the effect is losing its novelty as did Christoph Waltz’s smugly mannered cadence routine circa Django Unchained. If it was just one passage, it would not be so wearyingly corny, but Sully crucially returns in the final act.

Traversing the Midwest by Greyhound, Maren eventually meets Lee, played by Chalamet in roomy button-downs under a curly, red-tipped mop. The two immediately connect over shared traumatic pasts and a love of pancakes (the cannibals here have a surprisingly high appetite for normal food, unlike the vampires you usually see gagging on vegetables and the like), good conversation, and the satisfying taste of human flesh. Unlike Sully, who at least pretended to try not to kill people, Lee is undisturbed murdering his meals, though when they realize one victim had a wife and kid, Maren especially is horrified—apparently only bachelors provide guilt-free dining. Maren’s knack for encountering other cannibals continues when the camping couple are approached by Michael Stuhlbarg and David Gordon Green (in a rare acting turn, playing something like a voluntary cannibal) as an unbathed pair of road dogs exuding menace. In filthy, flesh-colored overalls and stringy black hair, Stuhlbarg is excellent here, again delivering a long disquisition to Chalamet to recall his far more benign climactic speech in Call Me by Your Name.

Maren and Lee’s escapade evolves into a journey of the self for the former after a visit to grandma (Jessica Hopper of both Suspirias) uncorks jarring revelations, but this section of the film, despite piling on potential reasons for Maren’s behavior and psychology, is dramatically inert, reflecting a lack of interest by the filmmakers in the traditional elements of the film’s attempted horror/drama balance. In an admission of defeat, the denouement simply slathers on the stage blood and cranks the portentous score. Russell (Waves) has said she felt like an outcast growing up biracial and, like Maren, constantly moving from town to town, and she brings some of that sympathy to her role here. A cocky Chalamet seems to relish stepping away from Paul Atreides, and his performance here sometimes touches his personal-best work in Call Me by Your Name (his little train-station moan of anguish when he realizes his lover is really gone still sticks with me).

Screenwriter and repeat Guadagnino collaborator David Kajganich is Ohio-bred, and much of Bones and All was shot and set in the state, though there’s no strong sense of that place or anywhere else—there may be some commentary about the architectural monotony of mid-America, but it’d be a stretch. Trent Reznor and Atticus Ross’s score is similarly nondescript, maintaining a gentle thrum interrupted by scattered blasts of Joy Division, New Order, and KISS (one misses the aggressive beauty of Tangerine Dream’s score for the similarly themed Near Dark). Cannibalism aside, this kiddie-pool Trouble Every Day is a blandly simple road movie and coming-of-age romance for which Guadagnino’s heretofore overripe style is an awkward fit. It all feels like commercially safe bet-hedging from an eccentric artist, perhaps disciplined by his previous film’s lackluster reaction. It’s doubtful the lead actors’ fans will mind, and indeed this movie’s slow pitch down the middle (with its hot cast and misunderstood-youth themes) should satisfy the teenybopper set it rather cynically targets.