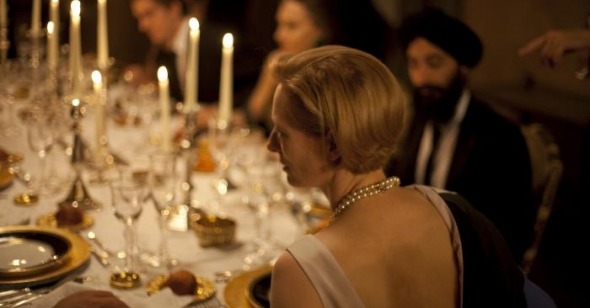 It’s the Pictures That Got Small
By Elbert Ventura

Bold, declarative, and maybe a little silly, the title “I Am Love” is a perfect fit for the movie it crowns. When they first appear on the screen, the words—Io Sono L’Amore, in musical Italian—seem as tall as the skyscrapers of downtown Milan. They are written out in ornate hand, a hint of the lushness to come. The urgent strings of John Adams’s monumental score don’t just usher you into the movie —they all but yank you in.

Director Luca Guadagnino and star Tilda Swinton have been unabashed about their lofty aspirations. In interviews, they invoke a lost tradition of swoony, sweeping melodrama. Their nostalgia permeates every frame of I Am Love, but that hardly makes the movie musty. There is a self-consciousness to the bravura, a recognition that Guadagnino and company are standing on the shoulders of giants. Visconti (The Leopard is an obvious touchstone), Hitchcock, Bertolucci, Scorsese, Antonioni, and Malick are among I Am Love’s stylistic forefathers. Welles looms large, too: Guadagnino’s chronicle of a powerful family that crumbles under the pressures of modernity and change recalls The Magnificent Ambersons. As in Welles’s movie, the scion of the dynasty emerges as the champion of the past in a changing world, a conflict that invariably leads to tragedy.

Swinton plays Emma, the queen of the Recchis. We first meet her fussing with the details of a big event: a birthday party for Edoardo Sr. (Gabriele Ferzetti), the paterfamilias of the clan. At the party, the grandfather announces that he’s stepping down as the head of the family business, and hands the reins to Tancredi (Pippo Delbono), his son and Emma’s husband, and—a surprise for everyone—Edoardo Jr. (Flavio Parenti), Emma and Tancredi’s eldest. Tancredi can barely hide his indignation at having to share the helm with his own son, but the party must go on. Later that evening comes a less fraught, yet no less monumental, event: Edoardo introduces his mother to Antonio (Edoardo Gabbriellini), a chef who beat Edo in a motorcycle race earlier that day and who has dropped by the house to offer a consolation cake. Edo and Antonio’s friendship blooms from that day on, but it is the meeting with Emma that will be most consequential.

In those opening passages, Guadagnino’s camera prowls the cavernous opulence of the house, panning and zooming on stray details, playing the docent of a dying world. Scorsese’s The Age of Innocence springs to mind, and not just because of the fetishistic style. That film’s hero Newland Archer lived in “a world balanced so precariously its harmony could be shattered by a whisper.” So, it appears, does Emma. Composed and collected though she may be, her face can’t help the occasional flash of consternation. The story that unfolds is of a delayed rebellion against patriarchy. But Swinton, doing some of her best work here, avoids the easy route, rejecting a schematic rendering of Emma’s gradual emancipation. Her Emma is no unhappy prisoner in her life, nor a mere ice queen waiting for the thaw. Indeed, it’s what makes the awakening of want in Emma all the more transfixing.

Unexpected epiphanies detonate in quick succession, overwhelming Emma’s defenses. Emma finds a letter from her daughter, Elisabetta (Alba Rohrwacher), revealing that she has fallen in love with a woman at college—a revelation that leaves Emma dazed, but hardly displeased. A later epiphany is even more powerful. The Recchi women gather at Antonio’s restaurant for a meal. In a scene the director says was inspired by Ratatouille, Emma finds herself overwhelmed by Antonio’s cooking—a lone spotlight shines on her as she relishes the chef’s work.

That aesthetic seduction is consummated later on. Emma, on a road trip to visit Elisabetta, spies Antonio traipsing around his hometown. She stalks him, ducking behind corners and into stores, gripped by an obsessiveness that unsettles her. She loses track of him—but then he bumps into her, and he suggests that she come up to the mountain spot he calls home. Up there the air is thick with summer. Emma walks around the garden as if in a trance, clutching at leaves, drunk from the sun. When she finally kisses Antonio, the image goes out of focus, as if it were all too much to bear.

The movie is shot through Emma’s prism. A woman awakening to the pleasures of nature and the flesh, she seems almost hypersensitive to the beauty around her—the colors are blinding, the images tactile. Guadagnino’s camera lingers on a menagerie of pleasures: flowers, fabrics, breeze playing on grass, even a lovingly prepared soup. In one scene, he takes it too far, intercutting Emma and Antonio’s outdoor coupling with Malickian scenes of nature (such are the dangers an unbridled sensualist courts). Emma’s seduction is depicted as a sybaritic wallow. It’s a metaphor for the viewer as well. Some may well walk away from I Am Love sober and sneering. But for the moviegoer parched in a time when the pictures have gotten small, Guadagnino’s voluptuary excess is an intoxicating brew.

And yes, sensuousness overwhelms sense—give more than a moment’s thought to the story and it might kill your buzz. I Am Love is operatic in form as well as content, its string of revelatory arias leading to an overdetermined climax. Edo figures heavily in a late-act turn. Reminiscent of George Amberson Minafer, a young man yearning for the old ways, Edo eventually finds out about his mother’s affair with his friend, a discovery that leads to catastrophe. But if Emma is a fleshed-out figure who comes into greater focus as the movie goes on, Edoardo Jr. is a cipher without will, one who grows only more indistinct the more we see of him.

That lack of clarity plagues the movie’s politics. As a critique of the capitalist order, a reading that Swinton and Guadagnino have encouraged, I Am Love never quite coheres into a definitive statement—and perhaps that’s intentional. Meetings in high-rises and talk of modernizing the workforce may pepper the plot, but the movie’s snapshot of the globalized moment is half-hearted. Guadagnino’s heart is really into juxtaposing the Recchis’ world against Emma’s new one. Emma’s rebellion embodies the triumph of art over the transactional. Late in the movie, we learn that she is the daughter of a Russian art dealer who dealt with Tancredi. The Italian, an avid collector, collected her, too. When we see Tancredi and Emma onscreen for the first time together, it’s of Tancredi ritualistically putting jewelry on Emma: the curator preparing his favorite piece for a showing. (Later, Guadagnino pointedly lingers on Antonio removing the same jewelry.) Awakened by Antonio’s artistry, Emma begins her break from the old order. The movie may not have much new or incisive to say about capitalism, but its vision of art’s obliterating power is bracingly romantic.

An obvious reference to Flaubert’s doomed heroine, Emma also recalls Henry James’s Isabel Archer, another woman consigned to a living death. But Guadagnino gives Emma the liberation denied others. As Adams’s pulse-quickening score crescendos, Emma finally asserts her long-buried self and walks away from a mansion—in the grim light of a rainy day, more a mausoleum haunted by men, alive and dead. Her husband actually has the last word. “You don’t exist,” he tells her. But she does, and the title is her unstated retort.