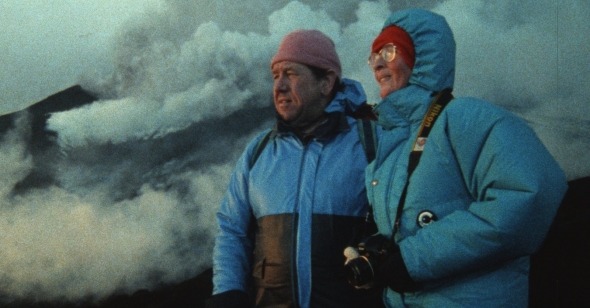 My Love Is Your Love
By Matthew Eng

Twenty kilometers, or roughly 12.5 miles, separated the volcanologists Katia Conrad and Maurice Krafft, two lonely, unruly, and insatiably curious adolescents coming of age and pining for volcanoes in postwar Alsace, the region in Eastern France that adjoins Germany and Switzerland. It is something less than a miracle and more akin to destiny, then, that Conrad and Krafft found each other as young adults on a university bench or at a documentary screening or during a blind date at a café. There is no definitive report of the pair’s initial meeting: the meet-cute on the bench is certainly the most romcom-friendly scenario and the screening (of a film by the elder volcanologist Haroun Tazieff) is perhaps the most propitious. But it is the blind date, the simplest and most credible of the three accounts, that filmmaker Sara Dosa favors and gently poeticizes in Fire of Love, a singular and sublime new documentary about the couple that risks the sentimental in order to realize the truly romantic. There is nothing novel about two strangers being set up on a date, but how wonderful it is to imagine that someone in their orbit saw one volcano-crazy geologist and one volcano-crazy geochemist and decided that these two might have some things to share with each other, like passions, aspirations, and, ultimately, a life.

The Kraffts (Katia adopted Maurice’s surname upon their marriage in 1970) spent just over two decades chasing, exploring, investigating, shooting, and writing about volcanoes across the globe, from Hawaii to the former Zaire. When they were killed on June 3, 1991, from the pyroclastic impact of an eruption at Mount Unzen, located on the Japanese island of Kyushu, Dosa tells us that they “[left] behind words, samples, hundreds of hours of footage, thousands of photos, and a million questions.” Drawing on the copious, frequently gobsmacking 16mm materials in the couple’s archive and their various writings, Dosa, a director and prolific producer of nonfiction cinema, could have relied on a simple, Wikipedia-abiding chronicle of Katia and Maurice’s career highs and lows before their deaths at, respectively, 49 and 45. But she has given herself a more dynamic mission. In collaboration with cowriter Shane Boris and writer-editors Erin Casper and Jocelyn Chaput (prizewinners at this year’s Sundance Film Festival), Dosa approaches the Kraffts (and the art of documentary filmmaking) with a magpie eagerness, remaining rigorously inquisitive about the duo’s lifework, the very volcanoes that braided them together eternally, inextricably. Fire of Love is reminiscent of no less than Werner Herzog’s Grizzly Man (2005) in its scrupulous and spirited engagement with its subjects and their unusual, all-consuming calling. (It is sheer coincidence that Herzog, who incorporated the couple into his 2015 documentary Into the Inferno, has announced his own standalone film about them, entitled The Fire Within: A Requiem for Katia and Maurice Krafft.)

Fire of Love is distinguished by its stunning archival assemblage, which foregrounds the soaring hilltops, mottled craters, and gurgling, spewing, viscous lava that the Kraffts risked their lives to capture. (The splendor and immensity of these sites is heightened by the original, trance-inducing electro compositions of Air’s Nicolas Godin.) Equally staggering and more unexpected is the incisive, thorough, and tremendously moving essay threaded throughout the film, peppered with intricately animated infographics made by Rui Ting Ji and Lucy Munger. One’s mileage will likely vary for the prominent narration of Miranda July, but the polarizing artist proves herself an apt and refreshingly atypical choice for this particular assignment; her woolly blanket of a voice is never overly precious and her crackling, measured cadences fill the film with a hushed wonder that evokes the subjects’ own.

It helps that the subjects in question were preternaturally photogenic, alone and together, whether ribbing TV correspondents, wandering through foreign locales, or striding up the mountains that mesmerized and magnetized them. The two were physical and temperamental opposites yet quickly excelled at “playing themselves.” Maurice, tall and doughy, is revealed as the more jocular and gregarious partner, a veritable showboat and shameless purveyor of bad puns. But it is the more reasonable, self-effacing Katia, bespectacled, petite, and pixie-haired, who holds our attention with little to no effort. The latter exudes a thoughtful charisma, sometimes using her expressive hands to underline and punctuate her words. One choice moment, captured during their last days at Unzen, finds Katia trailing off during a news interview to gaze miles ahead, with rapt concentration, at the volcano that will take her life.

Dosa casts the Kraffts as iconoclasts for rebuking the fusty predecessors who made simplistic categorizations about volcanoes within the walls of the academy without getting their hands dirty. The couple, conversely, saw each volcano as a separate and distinct phenomenon requiring close observation and exhaustive study. Similarly, Dosa arrives at no pat conclusions about the couple’s love and labor. There are moments when one might wish for sharper scrutiny into the ambivalences and complexities of their partnership and its divided duties, which entailed that Katia write and design their books, comprised of photographs taken by her, while Maurice toured the lecture circuit, screening the documentaries he had recorded and edited. But what emerges is a portrayal of love that feels fated yet emotional, intimate, and elemental; full of grand dreams and remarkable adventures, yet scaled to the size of human life, rather than myth.

It is this instinct—for pinpointing the mortal in the face of the mammoth—that allows Dosa and her cowriters to contradict Maurice, who often asserted that he wasn’t by any means a “cineaste.” Instead, using the archive as persuasive evidence, Fire of Love argues that Maurice was an artist who seldom treated filming as a haphazard act and instead crafted eloquent and at times bracingly cinematic images with his viewers in mind. Dosa also allows for moral conflict in the couple’s career, emphasized by their pivotal decision to focus on gray “killer” volcanoes, which erupt with catastrophic force upon the collision of tectonic plates. The Kraffts underwent a crisis of conscience in 1985 when a gray volcano in the town of Armero, Colombia, surged overnight and claimed close to 25,000 victims, many of them asleep, after government bureaucrats, who had been duly warned about the likelihood of such an event, deemed the price of implementing preventive measures and escape routes too steep to sanction. What good was the Kraffts’s globetrotting—and the striking if innocuous art produced along the way—when the very forces to which they had devoted themselves were causing mass death? Spurred by this tragedy, husband and wife harnessed their research to save lives. They retooled their filmmaking approach to promote understanding of volcanic dangers and advocate for preemptive warning signs and feasible evacuation plans; when Mount Pinatubo erupted in the Philippines, 58,000 people were saved, an outcome attributed by informed officials to a film by the Kraffts.

By this time, the couple had been dead for nearly two weeks. In Dosa’s film, their lives end with the suddenness of a candle’s flame being snuffed, leaving behind “a million questions,” though not the ones we might have initially assumed. A million questions. Perhaps my mind has been trained by tabloids and true-crime serials to anticipate the sensational in a deceptive phrase like that, which knowingly plays on our thirst for the unsolved, the clandestine. These questions, though, belong not to us, the viewers, but to the Kraffts, who wondered ceaselessly about the world and its mysterious workings, the secrets contained in the crusts of the earth. It comes as no surprise to learn that marks near Mount Unzen indicate that the Kraffts were beside each other at the moment of impact. The two spent their lives dancing along the edge of oblivion, electrified and indivisible in their search for the sublime.