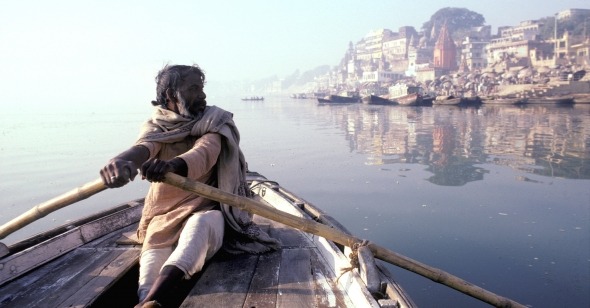 In the Bleak Midday
Nick Pinkerton on Forest of Bliss

Aside from the spare credits, exactly two pieces of English-language text introduce the American anthropological filmmaker Robert Gardner’s 1986 Forest of Bliss. One is an epigraph from W. B. Yeats’s translation of the ten principal Upanishads, fundamental precepts of Hinduism—“Everything in this world is eater or eaten. The seed is food and the fire is eater”—which interfaces uneasily with the film’s opening image, the first of many hungry, mangy stray dogs we’ll see throughout the movie. The second identifies the scene, simply, as Benares, India. Otherwise, Bliss goes without subtitles, meaning that it’s a dialogue-free film for all but Hindi speakers.

Benares, otherwise known as Varanasi or, sometimes, the City of Death, is located on the holy Ganges River in Upper Pradesh, in the north of the country, a little over 200 miles from the Nepalese border. It has been continuously inhabited since the dawn of the Iron Age in the Indian subcontinent, was the site of the founding of Buddhism around 528 BC, and is the holiest of India’s seven pilgrimage cities, a place where the sick travel so that they may die in near proximity to this hallowed water, later to have their bodies burned on the banks of the Ganges or submerged in its depths. The funerary industry is Varanasi’s main occupation, and Gardner has estimated that when he was shooting, the city averaged two or three hundred funeral ceremonies a day. One of the main locations of the film, Manikarnika Ghat, is the spot where, myth has it, the world was created by Shiva and Parbati, and where, per Hindu scripture, the world will burn at the end of time.

All of this information was collected with a few keystrokes of cursory research, which is what today passes for “expertise”—the usual process is for the author to neglect to mention to his reader that a week ago he was completely ignorant of the facts he is now holding court on. I learned exactly none of it from Forest of Bliss, a film that isn’t interested in conveying mastery but rather in endeavoring to understand, to access a wisdom beyond the enumeration of facts, something that is felt rather than known. In the course of slightly less than an hour and a half, Gardner looks in on the performance of various Hindu rites: sacred songs, ablutions in the waters of the Ganges, and the disposal of the departed. There is no narration, no translation, and no explanation for the dense thicket of liturgical gestures that we are peering into, each of which, one can intuit, has behind it an entire system of symbolic meanings and millennia of accumulated heritage and folklore. The viewer without a grounding in Hindu tradition will not, then, grasp the intricacies of the fire ritual that we see performed toward the end of the film, or what is signified by the flicking of Ganges water onto priapic roadside shrines—but mere definitions would offer something less fundamental, and more easily filed away, than what Gardner’s film does provide.

Gardner’s concern isn’t in explicating the “why” of what he is filming, but in exposing the how—in exploring the everyday labor, the painstaking acts of craftsmanship, and the hundreds of little bits of business that keep the gears oiled within Varanasi’s grand clockwork mechanism of ceremony. The DVD of Forest of Bliss includes a commentary track by Gardner and Stan Brakhage, author of that most essential work of thanatological cinema, The Act of Seeing with One’s Own Eyes (1971); here, Brakhage tells Gardner that while watching a corpse carried through the city streets, “You almost hold this body, visually, as you move with your camera.” This tactility is key. It is significant that in shooting the 2013 documentary Manakamana, filmmakers Stephanie Spray and Pacho Velez used the same 16mm Aaton 7 LTR that Gardner had filmed with a quarter century earlier. Constructed of eleven reel-length shots from inside a gondola lift cable car transporting Hindu pilgrims and tourists to 1,000 meters to the mountaintop Manakamana Temple in Nepal, Spray and Velez’s film is as concerned with the commitment of time in rites of devotion as Gardner’s is to labor. Put simply, Forest of Bliss is intimately involved with the role of the body in matters of the soul.

Early in Gardner’s film we follow a wisecracking old man—a priest, one supposes—down the city’s numberless stairwells that descend to the Ganges, feeling the effort evident in his every cautious step, until finally he arrives at the water, viscous and sterling in the morning light. The struggle with these steps, by a malnourished puppy or a blind beggar, is a recurring motif in the film, and ever afterwards Gardner keeps an eye out for these telltale signs of uncomplaining quotidian striving. There are a few scenes of lassitude, such as a bald, bulky, gross man—the betel-chomping master of a burning ground, as it later transpires—dozing during a massage, but for the most part the film is a caught up in a whirl of unending activity. We see firewood being cut with wedge and hammer, piled onto the shoulders of coolie carriers, and then stacked into the hulls of boats, which set off to deliver the load to the shore to keep the fires burning. As the boats move along the water, we hear the creak of the oars in the row-locks, which along with the rattling coughs of the old and ailing, the gurgling of submerged vessels collecting holy water from the river, and the clangor of bells and other ceremonial instruments being used for obscure purposes, makes up a great deal of the ambient musique concrete of the soundtrack. (Those creaks and the sluggardly slap of the paddles is the final sound we hear in the film, which ends as it began, in a dense soup of fog.)

There are other vignettes detailing the jobs to be done: the cleaning of something resembling a shallow, empty pool in the interior patio of a building with a whisk broom, the construction of what appears to be a short ladder from bamboo poles, and wild marigolds being snapped from their stems in a field and then strung into garlands, heaps upon heaps of garlands loaded into enormous baskets. The significance of these actions will only become clear in due time, in a sequence that begins with a rare point-of-view shot moving downstairs. The POV is revealed to be that of a corpse being delivered from the death bed; the “pool” is the spot where the bodies of the newly dead are brought to be prepared; the “ladder” is the stretcher or bier which they will be bound to; the garlands are decoration to see them off to the next world. All of this work, so scrupulously tended to, is routinely undone by the scavengers who swarm about the city: the ox that we see placidly munching on a discarded garland or the monkeys who skitter off with them; the wheeling crows or the stray dog we see chewing at a sinister-looking piece of unidentified carrion, wrenching the meat from the bone.

Though shooting the material that would form Forest of Bliss stretched over several weeks in 1985, it has been assembled and structured to play as though covering a single period of slightly more than twenty-four hours—a day, beginning with the sunrise on the river’s eastern shore; the sunset, with twilight announced by the discreet, voluptuous use of two slow-motion inserts; and the following morning, when the entire process begins again. It isa uniquely elemental film, in the sense conveyed in the Vedas—a film of air, water, fire, earth, and akash, or the void, from which the film emerges and which it returns to. It seems to belong not to the mid-1980s, but to the shared history of ancient man, when there was nothing in heaven or earth that could not be defined according to these fundamental, all-encompassing categories.

Robert Grosvenor Gardner, who died in the summer of 2014, was born into a world and a milieu that retained some of the musk and perfume of the Victorian age. He was a Brahmin, but of the Boston variety, a product of Brookline and Harvard related to about half of the hallowed names in Mount Auburn Cemetery who went into the field of cultural anthropology at a moment when it had some cachet with the social registry classes, like young Michael Rockefeller, who disappeared in New Guinea shortly after assisting on Gardner’s feature Dead Birds (1965). His father, George Peabody Gardner, was a prominent financier, the son of John Lowell (as in Robert) and Isabella Stewart Gardner. The latter, of whom Henry James once said she “is not a woman, she is a locomotive,” was the founder and namesake of a museum still standing in the Fenway area of Boston, a simulacra of a Venetian palazzo built to house and display her collection of treasures, which included objets d’art from the Far East, Old Masters, and works by Whistler, Sargent, and Anders Zorn. The last-named trio had all variously catered to the 19th-century Anglosphere art market’s mania for anything relating to Venice, a picturesquely crumbling, malarial, impoverished relic of a gaily colored imperial city whose sexually available flower girls and Roman Catholic mummery, awash in swirling incense, were irresistibly exotic to the newly flush Manicunian and Liverpudlian industrialists who snapped up canvases painted on the banks of the Grand Canal.

It is hard to imagine that these early impressions didn’t leave a mark on Gardner, and indeed there are moments when the boatmen in Forest of Bliss look an awful lot like gondoliers. has none of the sanitizing impulses and by-the-Baedeker scenic weakness of the Victorian Grand Tour painter—he shows us genuine squalor and wild mutts straining at stools—but he does have something like Whistler’s ultra-acute sensitivity to delicate tonal qualities, the ability to make us keenly aware of the changes in light through the “day” covered in the film from morning opacity to hard midday clarity to the softness of the gloaming, and the consequent subtle variances of coloration in the water of the Ganges, from silver to blue to the evening’s rich purple.

But Gardner is a filmmaker first and foremost, not a “painterly” pictorialist, and his individual compositions are placed within in an increasingly dense montage network, as intricate as the handiworks of the world that he’s observing. These connections are assembled according to a logic that is sometimes quite straightforward—as when we first see the preparation of a body—sometimes like-with-like associative, sometimes instructed by motion from frame to frame, and sometimes splurging forth in a freeform impressionistic rush, as in a sudden break from the concentration on the funeral industry toward the end of the film, when we are reminded of the larger life of the city that continues to bustle despite the constant presence of death, of the children at play, whose kites hover over the river. (The visual metaphors, like so many strewn garlands, are there for the taking.) Life goes on and on and on, until it doesn’t. Bodies are burned and tokens of tribute are extracted with mercenary efficiency. Rituals are performed and routines are obeyed and, yes, films are made. But few like this one—precious few.