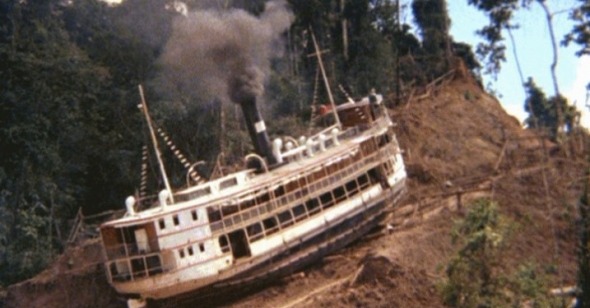 Men on a Mission
Fernando Croce on Burden of Dreams

In a time when a mediocrity like The Revenant trumpets its location-shooting exertions as proof of intransigent artistic integrity, it pays to remember the saga behind Werner Herzog’s 1982 film Fitzcarraldo. As with the numerous hurdles Francis Ford Coppola confronted while filming Apocalypse Now in the Philippines, Herzog's ordeals in the Amazon over the course of his self-described “cursed” production have become legendary. Both works are grand allegories that spin into indelible portraits of directorial mania, and both would be subjected to intimate behind-the-scenes scrutiny in documentaries that posited their auteurs as all-consuming visionaries. Where Hearts of Darkness: A Filmmaker’s Apocalypse remains focused exclusively on Coppola’s journey, however, Les Blank’s Burden of Dreams—to be screened at the Museum of Moving Image as part of the See It Big! Documentary series—paints a more spacious and earthy picture, contemplating Herzog at one of his obsessive peaks while providing an invaluable snapshot of the environment and people around him.

Blank’s previous cinematic brushes with Herzog—asking him about vampire repellent in Garlic Is as Good as Ten Mothers, recording his eponymous leathery meal in Werner Herzog Eats His Shoe—had been tinged with absurdist humor, yet Burden of Dreams opens on a grave note. Overhead shots of jungle choked with mist and scored to solemn chorales evoke similar passages from Aguirre: The Wrath of God and Heart of Glass; the tiny airplane bringing the documentarians touches down on a rough-hewn clearing, and its landing gear sinks in the mud. It’s early in a production that had started in 1979 and would be finally completed in 1982, but the number of complications is already high. Tensions between Peru and Ecuador had filled the border with soldiers, and, suspicious of strangers, Aguaruna Indians had torched the film camp to the ground. Shooting had to be moved to a new location and pushed deeper into the Amazon basin, where amoebic dysentery forced Fitzcarraldo’s original star, Jason Robards, to be replaced by Klaus Kinski. (Brief footage of Robards with a Shakespeare-quoting flunky played by none other than Mick Jagger suggests a quite different film from the one that would at last see the light of day.) With Jagger also having to leave due to concert obligations, Herzog finds himself starting over from scratch in the midst of dreadful rumors and vacillating investors—and that’s before the 300-ton steamship makes its entrance.

Based on true events that piqued the German filmmaker’s fascination with determination shading into megalomania, Fitzcarraldo follows an Irish tycoon whose fixation on erecting an opera house in the jungle led to a hulking vessel being literally hauled across the steep strip of land connecting two river tributaries. Herzog at one point calls this oneiric, Sisyphean image “the central metaphor of my film,” and, a steadfast believer in arduous actuality as an integral element of his cinema, naturally insists on having an actual steamboat actually dragged over a small mountain. (“That is not a plastic boat,” he deadpans, pointing to the stranded behemoth behind him.) Dealing with chaos ranging from unpredictable weather to local Indian conflicts to Kinski’s unconcealed irritation, Herzog exudes an uncanny, trancelike calm. The notion of giving up on the film, however, cracks his façade of serenity: “If I abandon this project,” he says as his familiar Bavarian voice momentarily wavers, “then I would be a man without dreams, and I don’t want to live like that.” Whether getting caught up in perilous rapids or taunting live volcanoes, the director has long regarded the medium as a way of testing himself, and it’s no surprise to see him explicitly folding his protagonist’s mad drive into his own. That existential-daredevil side is visible throughout the documentary, with Herzog rarely missing a chance to leap on canoes, wade through sludge, and handle native arrows. When he faces the camera and bares his zeal and fears, one glimpses a man capable of directing as well as starring in Melville’s Moby Dick.

The beauty of Burden of Dreams, though, rests greatly in how Blank and his editor/sound recorder Maureen Gosling capture not just Herzog’s dogged psyche but also the singular ecosystem surrounding it. The Fitzcarraldo production was plagued by extended waiting periods as much as by calamities, and it is during these patches of downtime that Blank’s distinctively immersive curiosity and zest are most evident. The faces of Campa and Machiguenga laborers and extras as they rehearse a scene, sing, or go about quotidian routines are of as much interest to his camera as the Teutonic auteur’s mythology building. Local activists vent their frustrations, a young prostitute (hired by the crew on advice from a Franciscan missionary) matter-of-factly describes her trade, and an affably grandiloquent Brazilian actor strolls in for a bit with Kinski and fusses with his Panama hat. Blank’s fascination with offbeat cuisine turns up in the preparation of masato, an alcoholic drink made from pounded yuca and fermented with saliva, and there are eccentric juxtapositions of his own: a native dexterously scuttling up a tree to the distorted static of a nearby radio, a squabble between a pair of feisty Campa women while the men watch in the background on what look like makeshift bleachers, a boyish villager grins while donning a Mickey Mouse t-shirt. That last image, and its crosscultural implications, seems to particularly concern Herzog: “We lose cultures and individualities and languages and mythologies,” he declares. “And we’ll be stark naked in the end.” That Herzog’s recreation of the original story’s collision of European seekers and indigenous residents is itself a form of colonial enterprise remains one of the film’s tacit but unmistakable ironies.

In a telling moment on the audio commentary of the Criterion DVD of Burden of Dreams, Herzog describes himself as a character in a Les Blank film. It’s a remark that speaks volumes about the director’s mix of seething sincerity and canny persona, not to mention his generous awareness of Blank’s own unique worldview. The making of Fitzcarraldo may be its subject, yet Burden of Dreams endures as an autonomous beast, a vision of the arduous nature of quixotic filmmaking set against a beguilingly uncooperative world. When, in the film’s most famous passage, Herzog launches into a coolly vehement monologue, describing the jungle as a disharmonious “obscenity” full of “fornication and asphyxiation and choking and fighting,” Blank can’t resist challenging his colleague’s storm of nihilism with views of strange natural beauty. (As Herzog describes a sky where “even the stars up there look like a mess,” a captivating silhouetted shot of tree trunks dotted with busy insects fills the screen.) Separated by contrasting approaches and philosophies, the two filmmakers are united by their insatiably searching instincts, and the resulting documentary illuminates both of their personalities. It’s fitting that the film’s coda follows the wild spectacle of an unmoored ship smacking into rocky riverbanks with the humble craft of a villager’s artisanal photography, different forms of art and life reconciled before the endlessly inquisitive camera.