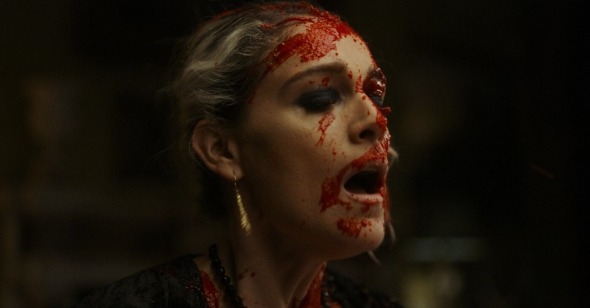 Director Peter Strickland’s transportive, fully realized alternate worlds put to shame most of the “cinematic universes” that dominate contemporary film conversation. In The Duke of Burgundy, In Fabric, and now Flux Gourmet, Strickland and his collaborators assemble fantasy social scenes that operate on their own internal, slightly askew logic, with the rules of real-life social norms heightened for parodic effect, featuring dry dark humor, kink, and readily apparent cinematic influences. The Duke of Burgundy, for instance, presented an all-female community of BDSM-loving lepidopterists, seemingly all residing in improbable stately manors. Flux Gourmet presents a similar hermetic sylvan setting, this time depicting enthusiasts of a robustly imagined music scene, satirizing both the art world and the entangled romantic and creative travails of collaboration.

Fatma Mohamed, noted for her standout supporting roles in several of Strickland’s past works (particularly as an imperiously verbose clothing store clerk in In Fabric), here takes the lead as Elle di Elle, the frontwoman for a “sonic catering” trio, working alongside young emo-haired Billy Rubin (Asa Butterfield) and the nervy Lamina Propria (Ariane Labed). Sonic catering is like if Foley work became its own artistic discipline, with practitioners building music out of live, distorted sound recordings of food being prepared and/or eaten, all playing over their performances. The still-unnamed group is in an artistic rut, which they’re hoping to work through during their month-long residency at the Sonic Catering Institute, dedicated to the “artistic pursuit of alimentary and culinary salvation as public performance.” Elle’s stubborn protectiveness of her vision summons most of the conflicts in the story, as she refuses input from her partners and chafes at the oversight of the institute’s director, Jan Stevens (Gwendoline Christie).

Flux Gourmet favors a maximalist brand of satire, inflating mundane peccadilloes into epic proportions. The institute has its residents act out clichéd creative exercises as part of a codified ritual; they embark on daily silent “thinking walks” and must give self-reflective after-dinner speeches on select evenings. Each public performance is followed by an “audience tribute,” which is a literal orgy. Elle and Stevens’s conflict is sparked by the latter’s mild suggestion that the band should not use a flanger pedal in their show. Despite initially not even knowing what a flanger is (she’s the “conceptual part” of the trio), Elle reflexively balks at this. The flanger remains their sole point of contention, figured as an elemental symbol of artistic disagreement, referred to again and again. Stevens seduces Billy to try to influence the group, and later fakes an act of vandalism to wrest control of the device. Elle then mounts a nighttime burglary to reclaim it, finding that the director has imprisoned it in a gilded birdcage.

Strickland has made a career out of using familiar tropes from “Euro-sleaze,” giallo, and schlock horror to elevate comedies of manners into epic endeavors. He conjures those genres’ garish colors and aggressive sound work around relationship conflicts in The Duke of Burgundy, a meditation on retail culture of In Fabric, and a metatextual look at filmmaking in Berberian Sound Studio. Flux Gourmet in many ways feels like it’s remixing elements from each of those earlier works. It combines the setting and attention to interpersonal dynamics of Duke of Burgundy (and reuses its reference to a “human toilet”), the older woman/younger man romance of In Fabric (with Christie again playing the woman, to boot), and the meticulous attention to Foley work from Berberian Sound Studio. More than that, the film draws directly from Strickland’s time as a musician, as he’s spent decades with the Sonic Catering Band, which does indeed turn food noises into music. Many of the songs Elle’s collective performs in the film were originally performed by that band. To a more literal extent than many filmmakers already do, Strickland has fashioned a world in which his personal predilections become fixations for his characters. Here the name of his band identifies an entire respected field.

Elle, then, is a stand-in for Strickland’s fascination with outré trappings. She’s obsessed with making cathartic art, but she has come up against diminishing returns on this front. “Silence from an audience was always my fear . . . To taste their shock is to be controlled by it, and with that, the need to go further and further into oblivion,” she says in an interview with Stones (Makis Papadimitriou). Stones is a self-described hack journalist and the institute’s “dossierge,” documenting each residency, and he unwittingly provides the inspiration Elle needs to push further in her work. He’s in constant intestinal distress of unknown origin, and she cajoles him into letting the group use this in their shows—performing around him undergoing a gastroscopy, then a colonoscopy. The condescending and cruel Dr. Glock (Richard Bremmer) offers little sympathy for Stones’s condition, and becoming an exhibition piece only adds to his humiliation.

Flux Gourmet defamiliarizes the everyday in its own construction as well. Strickland has always paid lavish attention to sound in his films, from the susurrations of insects in The Duke of Burgundy to, well, everything in Berberian Sound Studio. Sonic catering recontextualizes sustenance and bodily functions in the service of audio arts; boiling tomato soup sounds like a stormy sea, a blender like noise metal, the inside of a colon like a wind tunnel. Chopping vegetables creates distorting spikes in each soundtrack. Extreme close-ups turn julienned produce or heaps of pasta and bread into alien landscapes. It is remarkably easy to transform an object through cinematic suggestion—one can show an audience chocolate mousse and tell them it’s shit to induce revulsion. (And in possibly the movie’s best metatextual joke, it turns out to actually be chocolate mousse.)

While the production is impressive in its technical intricacy, the cast does much of the true work selling this world, performing the absurdity with admirable seriousness. The poker-faced conviction is key to the film’s offbeat humor. Stevens pronounces “investigation” in the most outrageously faux-French manner possible. Every single time they meet, Elle gravely intones “Jan Stevens!” Stones is described as letting farts “slide out” of him. But as in The Duke of Burgundy, Strickland mixes this arch silliness with a genuine affection for his characters. While the script wrings plenty of humor out of the hapless way Stones describes his condition in narration, it treats him with much more empathy than Dr. Glock does. (Notably, despite the frequent references to how much he is farting, only a single solitary fart is heard.) Despite the gags about how Stevens can hypnotize Billy by waving her groin-scented finger under his nose, the movie doesn’t mock them, allowing for the heartbreak of their emotional falling out. Strickland has not always maintained such a balance—Berberian Sound Studio and In Fabric both suffocated any dread under heavy air-quoting. But when his personal style transcends mere reference points, his films honestly feel unlike any other.

Flux Gourmet is less successful as a satire. It doesn’t help that it opens so soon after Crimes of the Future, another film which uses genre trappings to rib the art world much more incisively. The key difference is the specificity David Cronenberg brought to his vision. When Cronenberg’s main character derides a performance as “escapist propaganda,” it’s not a mere mockery of that kind of rhetoric and inter-artist rivalry; one can either agree or disagree with it on the terms set within the world of the film. But Strickland’s characters speak and act almost entirely in generalities. The fact that Elle and Stevens’s artistic headbutting never goes deeper than their disagreement over the flanger is funny, but also emblematic of this. While the dynamics between the characters are fully realized, the essence of their art seldom feels more than theoretical.

The film also talks a great deal about fetish, but it too often feels like just talk. Billy has an egg fetish, and during one of his love scenes with Stevens, Strickland intercuts shots of an egg cooking, culminating in an abstracted final image of yellow food color dilating in water. The scene feels sterile—the bed is seen only from a distance, with almost everything obscured under covers, and the sizzling egg and butter feels more like a YouTube cooking video than truly erotic. Contrast this with the iconic yolk make-out from Juzo Itami’s Tampopo, a film that explores humans’ relationships to food with more breadth and depth. Perhaps too much like Elle, Flux Gourmet often lets the conceptual get in the way of its realization.