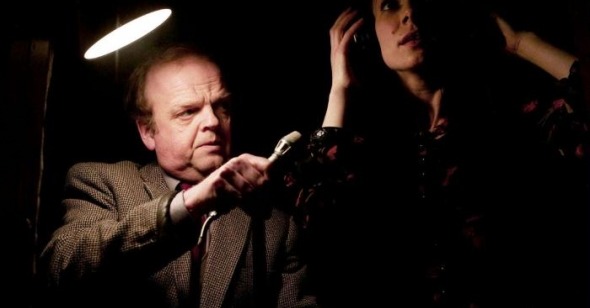 It cannot be a coincidence that the peculiar Gaelic name Gilderoy‚Äîthe one given to Toby Jones‚Äôs gnomish sound engineer in Berberian Sound Studio‚Äîsounds so dreadful when pronounced in English, but sounds so elegant with an Italian accent. Though one cannot say the same for its aesthetics, nothing aural in Berberian Sound Studio is left to chance. It‚Äôs a film which might feel at times like a patchwork of dozens of others, but has a singular quality which transcends almost any comparison: it is built of sound.

The primary inspiration for British director Peter Strickland (this is his second film following his slow-burning Carpathian revenge drama Katalina Varga) is a musical one. A fervent amateur of avant-garde composers and musique concr√®te, Strickland was moved in particular by the soundtracks to various giallo Italian horror movies of the 1960s and 1970s, recognizing that the likes of Ennio Morricone, Bruno Maderna, and Gruppo di Improvvisazione Nuova Consonanza were making music in the same bracket as Stockhausen, but scoring B-movies on the side. The film takes its name from the remarkable American soprano Cathy Berberian, who in later life became known for her compositional collaborations with the likes of John Cage and Luciano Berio, swapping Gershwin melodies and Kurt Weill torch songs for guttural vocalizations and‚Äîoccasionally highly comical‚Äîorganic noises, such as clicks, moans, breaths. The score and soundtrack to Berberian Sound Studio (the music is by James Cargill, one half of the band Broadcast; the supervising sound editor is Joakim Sundstr√∂m) represent a sonic palette to which the visuals are wholly subservient. Not simply the subject of the film, driving its plot and characters, sound is also its primary conduit of audience communication and emotion. The primacy of sound is most clearly exemplified by the fact that the film on which Gilderoy is working is never shown to us. Strickland has recounted occasions from childhood where he listened outside the door while his brother watched a horror film on VHS which the young Peter wasn‚Äôt allowed to see. All he could hear was the screaming and the sounds of evisceration.

Yet Berberian Sound Studio is not‚Äîdespite its emphasis on the anxiety and victimisation of the protagonist‚Äîa horror film. Its unabashed obsession with audio disqualifies it from easy categorization, though it is set entirely in an Italian sound studio that produces giallos. The director, Santini (Antonio Mancino‚Äîfilm directors have no right to be that good-looking, by the way), a vile hack masquerading as an auteur, hires a humble sound engineer from the English home counties to work on the ADR for his latest ‚Äúmasterpiece‚Äù The Equestrian Vortex, a film whose title seems positively conservative next to its sanguinolent subject matter. Gilderoy, who lives with his mother and normally makes bucolic documentaries about the South Downs, begins the movie confused and homesick . . . and steadily goes downhill from there. His gradual descent into madness accompanies an intensification of his work in the making of The Equestrian Vortex: he is soon obliged to fill in for the Foley artist, variously ripping, squashing, and hammering fruit and vegetables to pieces while unspeakable acts unroll on screen. Yet outside the lurid Grindhouse-style credit sequence, we never are shown one frame of Vortex. Berberian uses the ‚Äúinvisible horror‚Äù conceit seen in films such as The Haunting and The Blair Witch Project, but the unseen monster here is the Vortex film itself. Instead we are presented with a meticulous‚Äîat times educational‚Äîstudy of the ADR and Foley processes, with various actors positioned in a soundproof booth, howling and screaming in sync to the atrocities on the hidden screen, while Gilderoy and his team fiddle with the kit. The camerawork has a tendency towards the quaint, featuring a basic horizontal or vertical push about 90 percent of the time, with the occasional, rather facile, Kubrickian one-point perspective shot. Where the film succeeds visually is in its claustrophobic confinement to the space of the studio and Gilderoy‚Äôs lodgings. We are never clear what time of day or night it is‚Äîthe only exterior scene (which we assume to be in a garden) is shot in pitch darkness; there is no visual evidence of its location, only the aural inference of the way the voices disappear into the sky.

The temptation to see autobiography in the sense of displacement, distrust, and unease of the ‚Äúforeigner abroad‚Äù (Strickland had, as a matter of record, a nightmare filming Katalina Varga in Romania) doesn‚Äôt really add to our appreciation or create any strong emotional rapport. The investigation of the darker aspects of moviemaking never quite takes hold either, undermined by the film taking too many liberties with realism: that the studio would provide market stall of gorgeous fruit and vegetables for the Foley table is as fanciful as the idea that every sequence of the film they‚Äôre working on is prepared for looping by having a narrated voice-label attached to it.

The reason for Gilderoy‚Äôs hiring is pointedly questioned but never explained, and his gradual breakdown is dramatized by a series of ingenious but deliberately baffling sonic hallucinations which, depending on the volume setting in the theater, can be quite violating to the ears. The film‚Äôs lack of narrative or emotional cogency might have us reaching for screamingly obvious reference points: the claustrophobia of Polanski, the ellipticity and the emphasis on dubbing in Mulholland Drive (there‚Äôs even an illuminated, flashing SILENZIO sign). After Gilderoy sees his immediate past projected as a film on a screen, dubbed in Italian (in a twist on Bu√±uel's dream-decoy technique from The Discreet Charm of the Bourgeoisie), he begins to speak in dubbed-Italian as he goes about his business. In trying to place Gilderoy as a character, you may rapidly settle on the nervous nerdiness of Harry Caul from Coppola‚Äôs The Conversation, or Karl Kopfrkingl from Juraj Herz‚Äôs The Cremator, whose fussy romanticism and abstemiousness might have been a reference to Hitler. Berberian also shares The Cremator‚Äôs juxtaposition of black comedy and psychological anxiety, but has none of that film‚Äôs political motives. You‚Äôll cling on to these references but the film will pry your fingers away, one by one: there‚Äôs nothing quite like Berberian Sound Studio out there.

Yet there is a conceptual sadness at its heart, which leads us away from the realms of horror into those of tragic drama. Berberian Sound Studio shows us how the terrible extremities of human imagination (the deluge of torturing and dismemberment in The Equestrian Vortex) can be softened by a reductive mechanical process, creating a permanent distancing effect for the audience and perhaps an alibi for our enjoyment of horror. The only person who isn‚Äôt distanced from all of this is Gilderoy himself. His fastidiousness, portrayed with no little subtlety by Toby Jones, sucks him in so deep that he can‚Äôt separate himself from his art. Only in this unsettling observation on the perils of obsessiveness does this meticulous sonic tapestry lay claim to being something more than an elaborate stylistic coup.