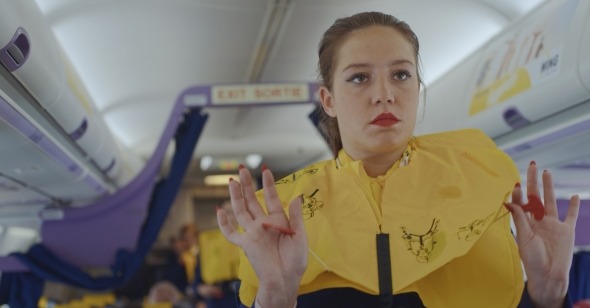 The Friendly Skies
By Mark Asch

Zero Fucks Given plays at Museum of the Moving Image as part of First Look 2022 on Friday, March 18.

Following the deregulation of the aviation industry in the European Union in the early 1990s, a number of low-cost airlines, notably including EasyJet and Ryanair, sprung up to fuel a boom in short-hop travel. Slashing overhead through direct-to-customer ticket sales, cheaper costs at secondary airports, and punishing working conditions, and building their margins back up with add-ons like extra bag fees, price-gouging on food and drinks, and in-flight duty-free sales, these new carriers made the luxury of international travel commonplace and accessible, a brave new world of city breaks and dirty weekends. In a more recent symbiosis, Airbnb has effectively cornered the rental market in historic cities transitioning from long-gone manufacturing centers into service-based economies filled with small-plate restaurants and “immersive Van Gogh experiences,” catering to the much vaunted millennial preference for “experiences” over material possessions. (This preference was basically invented by trend-forecasting consultants, and, given the catastrophic carbon cost of increased air traffic, it’s an ethically specious one.) Julie Lecoustre and Emmanuel Marre’s debut feature Zero Fucks Given, starring Adèle Exarchopoulos as a hard-living, pain-numbing flight attendant on the fictional low-cost carrier “Wing,” is a welcome indictment of the Common Market’s leisure culture and spiritual malaise.

Exarchopoulos’s Cassandra, in blue skirt suit and yellow silk scarf, hard-sells perfume to holidaymakers, argues with backpackers about carry-on fees, and sneaks sips from mini bottles on the descent. She has a different set of coworkers every day; most of the film’s dialogue is in Global English, the language of transitory, transactional encounters. Cassandra’s Instagram handle, from which she posts a snap of the tarmac, is “carpediem361”—presumably her bio on dating apps includes a line about how she “loves to travel,” and a pasted-on smile just like the one she wears for the safety demonstration. She’s a minor train wreck who almost gets written up for not shaving her legs and blows off an appeal from the airline’s ground-crew union. Born in Belgium, she’s based out of the Spanish island of Lanzarote, but envies the glamorous globetrotting Emirates attendants. Dubai in the film functions as the new paradise over the horizon, underscoring the rise of the Arab world as the new, totally frictionless fun-in-the-sun luxury destination as Europe loses its luster and the chintz of the Canaries begins to show. She goes to laser-light rave clubs that look awful, and ignores the palm trees when sitting poolside, desultorily swiping left or right.

Evidently shooting on real, cramped airborne planes—the jostling of the handheld camera in the aisles triggers involuntary sense memories of coming back from the bathroom when the beverage cart is out—Lecoustre and Marre rely on the international art-house formula for character-driven storytelling: naturalistic, semi-improvised immersion in a real milieu, punctuated by lyrical longueurs. A dialogue-free follow-shot of Cassandra and a fellow flight attendant standing still on the people-mover as it carries them to the end of the cavernous terminal, where the cheaper flights leave from, duly rotates The Graduate and Jackie Brown’s iconic image of ennui 90 degrees.

With the exception of Exarchopoulos and the actors playing her family, the cast is entirely nonprofessional, drawn from the world of budget airlines: a particular standout is David Martinez Pinonas the supervisor who makes Cassandra clock out before reprimanding her and pressures her about her cabin crew’s duty-free sales take; with his manicured beard and high, pinched voice, always speaking the sanitized, euphemistic, demeaning language of middle management, he embodies the barely closeted self-loathing of the smiling sellout. Everyone in the movie is always selling something, which, especially given Wing’s itineraries of Instagram-backdrop warm-weather destinations, speaks to the exhausting pressure on the brittle branded self under neoliberalism. Cassandra’s own cellular provider cold calls her to upsell her on a bigger data plan; Exarchopoulos, who cannily uses her natural diffident pout when showing Cassandra at work, allows her face to soften and go watery as it transpires that the plan is the name of her dead mother.

Cassandra is in a holding pattern, to use the obvious aviation metaphor—she takes extra shifts around Christmas so she doesn’t have to go home; this is one of those movies in which character arcs about grief and trauma force a cinematic shape onto a fully functional real-world ecosystem. Deceptively casual workplace interactions often land on hard beats about disposable labor and casual sexism; at one point, when Cassandra is on a training course with other Wing flight attendants—many of them Eastern European, all of them charming and engrossing in their aspirational busy professionalism—there is, amidst the hen-party role-playing, a sort of Warhol Screen Test in which each in turn is instructed to hold a smile for thirty seconds as an offscreen voice encourages them: “There is no past, there is no future.”

Our protagonist’s secret sadness is much alluded to, before a grounded Cassandra returns home to face her demons in the film’s overlong second hour. If you only see one film about the gaping white-walled emptiness of the modern modular budget-travel experience, make it Lucio Castro’s End of the Century, one of the very best films of last decade. But Zero Fucks Given adds more texture to our understanding of this way of being’s unbearable lightness.