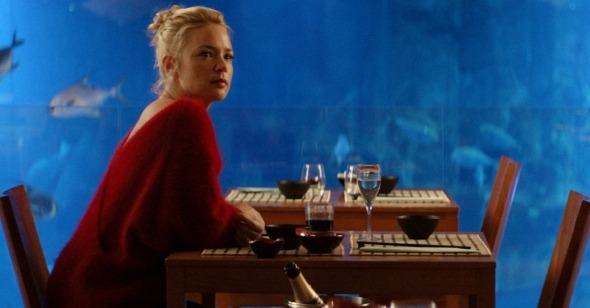 Anxiety of Influence
by Beatrice Loayza

In her 2016 romantic comedy In Bed with Victoria, French filmmaker Justine Triet made a captivating train wreck of Virginie Efira. A gleefully overworked attorney and neglectful mother of two, Efira‚Äôs eponymous Victoria finds it easiest to manage her own wretchedness by burying herself in the problems of her clients, a devotion that practically ensures a professional ruin at the hands of personal flare-ups. In a film about walls real and metaphorical, compartmentalization is the name of the game, yet Victoria never seems to take the rules seriously. In Triet‚Äôs latest film, Sibyl, lives past spill over into the present, and emotional burdens warped by the passage of time come to bear in another tale of tormented career women, spectacular breakdowns, and bad mothers. Triet‚Äôs second collaboration with Efira, Sibyl plays in many ways like a B-side to Victoria, offering another multivalent spin on the psyche of the modern, bourgeois woman.

In Sibyl, Efira‚Äôs titular protagonist is a writer attempting to devote herself anew to the craft after nearly a decade of married life and a job as a therapist. Perpetually suckling on a vape pen, Sibyl also has a history of addiction, and attends weekly AA meetings, where she claims writing is now her only unhealthy fixation. Despite cynicism from her literary-minded friends (‚ÄúWriters have less legitimacy than ever before; inspiration is a lie and hard work is pointless,‚ÄĚ one declares), Sibyl terminates her relationships with most of her patients, one of whom breaks down when she explains her departure. Just as she begins working on a fresh but intimidatingly blank new word document, Sibyl receives a fateful call from Margot (Ad√®le Exarchopoulos), an explosively distraught actress desperate for help. Sibyl at first rebuffs, but ultimately capitulates to Margot‚Äôs insistence, while scenes from David Robert Mitchell‚Äôs It Follows appear on her television set. Triet‚Äôs film trades in suspense and screwball, and this pointed reference to Mitchell‚Äôs tale of sexual guilt-tripping registers as both playful and ominous, as well as a harbinger of the stalking torment that will manifest in the coming days and weeks as an onslaught of texts and missed calls. The guilt of hanging upwards of 20 clients out to dry weighs on Sibyl, but not for the reasons you‚Äôd expect. Listening to Margot‚Äôs romantic ordeals, a more poignant haunting is triggered: memories of a past romance where Sibyl herself was the kind of the emotionally dependent person she now caters to professionally.

Whether for the pleasures of feeling desperately needed by the actress, or for access to juicy material for her novel, Sibyl entangles herself in Margot‚Äôs drama to a precariously intimate extent. The scandal is thus: a love triangle with Margot‚Äôs co-star, Igor (Gaspard Ulliel) and the director of their film, Mika (Sandra H√ľller), gets even messier when Margot discovers she‚Äôs pregnant with Igor‚Äôs baby. As the actress relates the intensity of her sexual relationship with Igor and her tortured indecision over whether to carry out her pregnancy, glimpses of Sibyl‚Äôs relationship with Gabriel (Niels Schneider) return with startling intensity.

In this nonlinear narrative, which abruptly, frequently jumps back eight years in time to glean moments from Sibyl‚Äôs former life and love, choppy scenes have the effect of disorienting, painful memories resurfaced, like picking up the disordered pieces of diary pages torn to bits. At the same time, such visceral, but ultimately empty formal tinkerings come at the expense of deeper readings into the multiple conceptual playing cards spread out by Triet. Issues of authorship and professional ethics are questioned as Sibyl lifts entire lines of dialogue from Margot‚Äôs confessions, and as she reinterprets the actress‚Äôs story through the exhumed emotions of her own life, both experiences blend into one. This element of artistic interpretation registers, however, as nothing more than an exhausted expression of nihilism, as when Sibyl‚Äôs voiceover narration proclaims, towards the film‚Äôs oddly resigned conclusion, that ‚Äúeveryone is a character; my life is a fiction.‚ÄĚ

Though the structure never convincingly establishes parallels between Sibyl‚Äôs blinkered memory of Gabriel and the dubious nature of Margot, Igor, and Mika‚Äôs show business m√©nage √† trois, Triet succeeds in drawing out an absurdist humor from the flawed way in which the mind preserves images and ideas of loved ones. Margot‚Äôs abortion deliberation is rooted not in her own feelings about having a baby, but in whether Igor is sincere about his desire to keep it. His expressed trauma over a stillborn with a past lover leads Margot to believe him, but a television interview with Mika, where she sorely admits to her boyfriend‚Äôs bothersome secrecy, casts doubt on Igor‚Äôs authenticity. Later, when Sibyl heads to the secluded island location of Margot‚Äôs film shoot, Igor seems to renounce responsibility to either woman, telling Sibyl, ‚ÄúDeep down I‚Äôm empty.‚ÄĚ

As Igor and Margot enact scenes of romancing and betrayal before the camera‚ÄĒat times captured in raw footage‚ÄĒfact and fiction blur. Reality proves easily adjustable to the tricks of movie magic, as when a shot in the film-within-the-film shows Margot staring lovingly at a crooning Sibyl out of frame. In the meta-film, Igor is the object of Margot‚Äôs affections, but the actress can‚Äôt pull off a genuine passion for him after their relationship goes south. Sibyl steps in as a replacement here, and again for Mika in a particularly uproarious scene that has the writer cum therapist directing a complicated sex scene finale unachievable by the exasperated filmmaker. As Sibyl increasingly becomes a stand-in, she helps Margot literally act her way through scenes, and her expanding role as sole custodian of the flailing actress‚Äôs ego and emotions becomes too guilt-ridden and burdensome. The heightened drama of the set summons her own similarly unflattering coping tactics from years past.

Confined to Sibyl‚Äôs selective memory of Gabriel, we see the couple at their most passionate and also at their ugliest. When he suddenly breaks up with her, claiming she‚Äôs ‚Äútoo alive‚ÄĚ and ‚Äútoo demanding‚ÄĚ‚ÄĒclich√©s, of course, but not entirely untrue of the recovering alcoholic‚ÄĒSibyl responds with fury and vengeance in her eyes. Indeed, Triet never shies away from showing just how unwieldy and potentially egotistical her women can be; Efira plays Sibyl with distracted, self-centered introspection, and later with hedonistic abandon. Triet‚Äôs triptych of frenzied, charged women expands beyond the Efira one-woman show of In Bed with Victoria with the addition of Exarchopoulos as the innately sensual and self-pitying Margot, whose lips seem to be constantly trembling in distress; and H√ľller as Mika, the cuckquean directress who for the most part manages to bury her stress and sorrow under the pressures of production deadlines and motormouth talk therapy. As foils to Sibyl‚Äôs own dismantling, however, these women are too often kept to exaggerated one-note personalities to offer much else beyond a willingness to be messy and outraged.

Men are trash, it goes without saying, but Triet knows that framing them as the most formidable enemies is an exhausted approach. In this thinly drawn battle of the sexes, women take center stage. Naked, noisy, deceptive, and brimming with physicality, these women have more impact and presence than their masculine opponents, who are infuriatingly elusive, mere projections, punching bags, sex dummies, and even annoyingly good and principled (as in Sibyl‚Äôs husband). The true challenge comes in the form of learning how to cope with the hurt, and dealing with the mangled consequences of misguided battles fought solely to dignify one‚Äôs feelings and sense of self. Margot‚Äôs abortion dilemma resonates with Sibyl‚ÄĒshe still constantly wrestles with twisted feelings over her ex-lover. She remains embittered by his abandonment, and she lives with the shame of having his baby in part as a failed attempt to make him stay.

Given more attention than the kids in Victoria, the tousled, androgynous-looking young girls that play Sibyl‚Äôs children are looked at with unease, points of mystery expressive of their mother‚Äôs inability to come to grips with her own demons. Triet articulates the anxiety of motherhood via a woman fundamentally uninterested in mothering, too lost in the memory of a man whose traces are inescapably contained in her daughter‚Äôs visage. The film ends on a combative note, with Sibyl confronting her child in an unprecedented moment of stillness. The delicate question buried (perhaps too deeply) beneath the film‚Äôs titillating dramatics‚ÄĒgritty beach sex, drunken crooning, trashed hotel rooms, and black mascara-colored tears‚ÄĒremains: Was it all worth it?