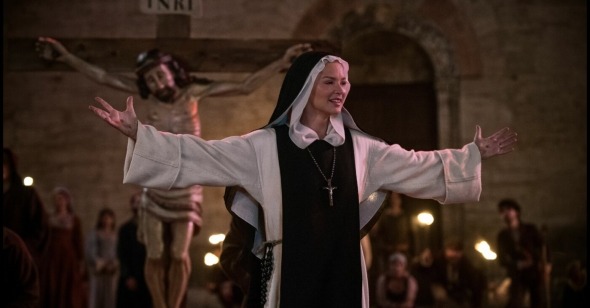 What Price Glory?
By Beatrice Loayza

Like the religious icons she so furiously worships, the commonly used promotional image of Benedetta (Virginie Efira)‚Äîher nipple peeking out of a nun‚Äôs all-white habit, slightly opened like a pair of lips‚Äîwould seem to promise something very different than the film we get. The teased provocations are similar to those in Basic Instinct, another fleshly Verhoeven spectacle whose erotics rely on the interplay between guilt-laden restraint and heedless abandon, and which sees Michael Douglas‚Äôs rugged detective figure trying and failing to maintain a professional relationship with Sharon Stone‚Äôs Catherine Trammel, his foxy prime suspect (who also gives us a generous peek while clad in ivory threads). But Benedetta, a lesbian ‚Äúnunsploitation‚Äù movie insofar as it mocks the Church and concerns brides of Christ with sacrilegiously high libidos, hardly achieves the same lascivious effect. This is not a failure of the film so much as an instance of false advertising, with faux-outrage drummed up by what we‚Äôre supposed to believe are legitimate Catholic protestors who have gathered outside the film‚Äôs various festival screenings.

Sure, there‚Äôs a wooden dildo carved in the image of Christ, and an extended scene of oral sex that makes Benedetta realize those delightful tingly sensations she experiences when fantasizing about Jesus are more effectively generated by some tongue action. But these moments only really serve to further ridicule the arbitrariness of the systems of power under which we live, which sustain themselves by dressing in the sheep‚Äôs clothing of higher truths. The ‚ÄúIt‚Äù girls of Showgirls don‚Äôt actually exhibit extraordinary talents that surpass those of their peers; stars are born in America because they make the right people horny, and because they are willing to engage in foul play. The giddy jingoism of Starship Troopers is all the more inane because the threat posed by the ‚Äúbugs,‚Äù in a departure from its source novel, is a clunky invention of Federation propaganda. In Flesh and Blood, Verhoeven‚Äôs first Hollywood movie, a bawdy medieval romp that revels in blasphemy and bubonic boils with greater energy and derangement than Benedetta would more than 35 years later, a band of mercenaries mindlessly travelin the direction toward which a statue of Saint Martin happens to be gesturing; a crooked cardinal sees Rutger Hauer‚Äôs sword-for-hire posing against a wagon wheel that frames his head like a halo, and declares the rogue one of God‚Äôs messengers. You could say Verhoeven has a problem with authority.

Set in 17th-century Italy, Benedetta lays out this ethos immediately, when our titular heroine, still a little girl, makes her way to the convent ready to take the veil. Her party is stopped by a horse-mounted street gang demanding treasures, but young Benedetta fends them off by summoning her faith: a bird shits on one of the scoundrels' heads. Miracle? One could call it that, but in Verhoeven‚Äôs world such supernatural phenomena are better understood as distillations of the absurdities that uphold political power. There‚Äôs no need for convoluted rhetorical strategies to obscure reality when the masses defer to an abstract and unknowable deity who is simultaneously equipped with unquestioned authority (the stakes are life, death, and eternal damnation itself!) and ironically devoid of any actual sovereignty, a blank page to be filled in and reinterpreted by human whims. As Benedetta declares later in the film, ‚ÄúGod is not bound by any rulebook.‚Äù

When Benedetta first arrives at the convent, the elder nuns and Charlotte Rampling‚Äôs steely Mother Superior tell her, ‚ÄúIntelligence can be dangerous.‚Äù They then foist cartoonishly ascetic practices on the young woman: her gown is replaced with an itchy, brown sack, her sleeping quarters referred to as a ‚Äúcell.‚Äù One sister with a wooden finger explains how she wishes her entire body were a block of wood‚Äîall the better to honor her lord and savior. Benedetta is relatively compliant, at least initially, but nevertheless stands out because of the frenzied, passionate nature of her devotion, whose depths assume the form of erotic fantasy. She repeatedly checks out of reality during religious ceremonies, plunging into trashy romance dreamworlds starring a Fabio-esque Jesus, which Verhoeven envisions as a kind of involuntary possession when she snaps back into consciousness often surrounded by bewildered spectators. As a child, Benedetta is pinned down by a statue of the Virgin Mary, which she denies toppling as proof of her connection to the mystical. When she licks the statue‚Äôs breast, the moment suggestively evokes the relationship between young girls and their matinee idols, one of constant longing for not only the transformation of a mere image into the real but also for reciprocation. Benedetta may be playing pretend, but her actions are motivated by deadly serious intentions.

Yet it‚Äôs not Benedetta‚Äôs erotic passions that come into focus as she discovers the real-world pleasures of the flesh with the help of a peasant, Bartolomea (Daphne Patakia), whom she recruits into the sisterhood. Far from inspiring guilt, her sexual awakening emboldens her to rewrite the word of God to serve her own ends, as the feckless and bejeweled members of the clergy, like Lambert Wilson‚Äôs meat-munching papal representative, have done for ages. Efira, who played the religiously devout wife of the man who rapes Isabelle Huppert‚Äôs Michele in Verhoeven‚Äôs Elle, anticipated the dazed otherworldliness and intimidatingly serene self-confidence of Benedetta in that earlier performance. In Benedetta, Efira builds upon that character by doubling down on the qualities that make her such an electrically unhinged hot mess in Justine Trier‚Äôs Sibyl and In Bed with Victoria. Her eyes bulging, Benedetta manically pulls herself up by the bootstraps and into sainthood, speaking in tongues, bloodying her hands as if afflicted by the stigmata‚Äîeven rising from the dead.

Benedetta engages in the Evil of All Evils that is lesbian sex, but she raises a good point when she asks who determines God‚Äôs will. Benedetta‚Äôs self-realization, her will to power, as it were, is the recognition of the system‚Äôs mutability, beholden as it is to hilariously archaic and arbitrary codes. Sister Christina (Louise Chevillotte) accuses Benedetta and Bartolomea of sapphism, but she never ‚Äúsees‚Äù them in the act; she just ‚Äúknows,‚Äù which proves unconvincing against Benedetta‚Äôs extravagantly legible (if phony) claims to divinity. After being punished for her sinful skepticism of Benedetta, and forced to give herself a lashing, Christina commits suicide by jumping off the convent‚Äôs rooftop‚Äîan anti-spectacle against a silky crimson, El Greco-ish backdrop, that ends with a dull thud.

The film‚Äôs dominating mood is precisely this drab cynicism as Benedetta‚Äôs politicking devolves into redundant miracle-brandishing and her conflict with the papal leaders into a perpetual back-and-forth of finger-pointing and chest-puffing: You‚Äôre the blasphemer! No, you! Ad infinitum. These developments would seem to play for laughs, but the ridiculousness stems less from outrageousness than the rote persistence of such a meaningless performance (as the bubonic plague ravages the country, no less). In this sense, Verhoeven‚Äôs supposed indictment of religion plays more like a late-capitalist statement envisioned at a Brechtian remove, revealing the ease with which even the most self-righteously rigid institutions will absorb blatantly incompatible subjects with the right price and strategy. Benedetta‚Äôs conclusive triumph over the papal bigwigs when she swindles the masses into rioting feels mockingly empowering and imparts serious Girlboss energy, which explains the nuns with the immaculate highlights and contoured faces.

Money exchanges sneak into every encounter, often muting the drama with flat irony: Bartolomea is a poor girl running from a father who wants to violate her, but she is initially turned away from the convent because she can‚Äôt afford a dowry worthy of Christ; a nurse prescribes poppy juice and emphasizes the price (20 dinari)‚Äîlest we be under the impression medicine could ever be free. What is sainthood in such a context? ‚ÄúMiracles are more trouble than they‚Äôre worth,‚Äù sighs Rampling‚Äôs Felicita, who downplays such wonders knowing full well that the most awe-inspiring, faith-affirming acts are often exercises in smoke and mirrors. That the system is a sham upheld by consummate performers is practically an open secret among the Church‚Äôs leadership. More than a saint, Benedetta resembles a high-powered executive who has internalized her own corporate mandate, which in this case means martyrdom.