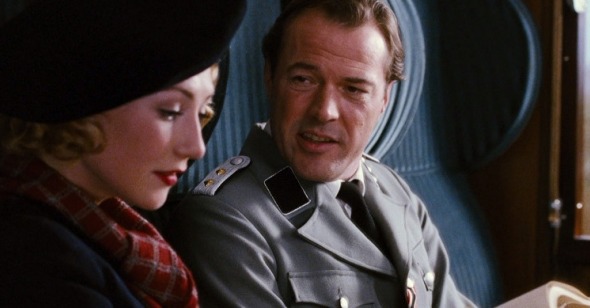 The apprehension among Verhoeven skeptics that greets his ‚Äúdoing‚Äù World War II has a familiar ring to it, and not just because Black Book retreads some of the same territory as the director‚Äôs 1977 Dutch Resistance thriller, Soldier of Orange. The reception clich√© ‚ÄúPop Master of Spectacle Goes Serious‚Äù is still grounded, in its modern form, in Schindler‚Äôs List; Black Book, Verhoeven‚Äôs post-Hollow Man rebirth after six years of silence, comes as a forceful career punctuation mark, even if it‚Äôs not quite the post-blockbuster penance of Spielberg‚Äôs Holocaust drama. Surface similarity springs out between two pop modernists pilloried for low-art sins: Spielberg‚Äôs sentimentality and Verhoeven‚Äôs vulgarity, both puppet masters of conscience-consuming spectacles.

But instead of restaging Schindleresque public debates about problems of representation and moral propriety, I wanted to recall another defining feature of Spielberg‚Äôs landmark: a German protagonist tailored to American sympathies. His Schindler was the entrepreneur as hero, in whom common business sense catalyzes decency; his speech about being an ambitious, penniless Sudetenland immigrant to Germany evokes the American Dream in all but name. The stakes of Black Book are likewise tied up with national and ethnic identity. For one thing, the film marks a Dutchman Verhoeven‚Äôs homecoming, not simply playing the ‚Äú√©migr√© jester‚Äù (as Eric Hynes memorably put it in an earlier issue of Reverse Shot) to us lily-livered Americans. And ever alert to the intertwining of genre and identity, Verhoeven selects for a hero a Jewish woman, who is not just helping save a country but must save herself. In the director‚Äôs melodramatic spy-thriller take, her persecuted status can ennoble or condemn a Dutch viewer with every twist and turn of the narrative.

Over a typical Resistance thriller‚Äôs narrative of national endurance, Black Book provocatively overlays many individual survival stories: Rachel Stein, our hero; the Jewish people, including bookend scenes in Israel; and the Dutch, whose definition of its ‚Äúpeople‚Äù is brutally recast from outside and within. Verhoeven‚Äôs biff-bang-splat approach seems peculiarly suited to the blitzkrieg on morality, landscape, and body enacted by the Nazis (perhaps most singularly horrific in the barge massacre, rendered with Eisensteinian machine guns). As Rachel escapes, impersonates, and struggles, the reversals and betrayals of the thriller reflect her embattled status (indeed, the reversals and betrayals of the unfolding Nazi horror in World War II become almost genre beats in lesser Holocaust dramas). Black Book puts the national triage front and center as Resistance fighters mull between saving Dutchmen and Jews who of course once were simply Dutchmen. And Rachel‚Äôs fellow fighters prove all too ready to believe her as a double agent, in a perverse echo of the Nazi party line.

The strongest American association with Holland and World War II may well be a 12-year-old child, Anne Frank. Although Rachel too has her ‚Äúhiding place‚Äù with a family of Christians, sex, not childhood innocence, is paramount in a Verhoeven movie. Perhaps unexpectedly, this marks another intersection with Spielberg: a hero utterly at ease with his or her sexuality‚ÄîSchindler‚Äôs virility (thought you‚Äôd forgotten that secretary audition montage?) and Rachel‚Äôs pragmatic seductions. And in both films the question of desire motivates the requisite Shylockian soliloquy. When the SS commandant whom Rachel is tasked with seducing voices his suspicions just before their roll in the hay, Rachel, half-dressed, responds by clutching her breasts and saying ‚ÄúAre these Jewish?‚Äù The phrase echoes Amon‚Äôs ‚ÄúIs this the face of a rat?‚Äù in Schindler‚Äôs List, also uttered on the cusp of physical contact.

I mention the comparison because Rachel‚Äôs literal ‚ÄúSo what?‚Äù response to the SS captures an essential quality of Verhoeven at work. So What: Rachel‚Äôs fearlessness, viewed no doubt as shamelessness by the SS, all in the context of a director who constantly, self-consciously, pushes an audience‚Äôs boundaries in terms of shame and disgust. It‚Äôs a remarkable gambit that, like so much in Verhoeven, seems simplistic (and which elsewhere often is), until he brings the logic of shame to a logical extreme, brought to bear on the community. Yes, the shit scene: a woman defiled with diarrhea in front of jeering crowds. It‚Äôs Verhoeven‚Äôs customary usage of a sexually liberated woman, unburdened by shame, as an ideological vehicle. But as a kind of reflective tragic hero, Rachel‚Äôs shit-shaming signifies not a personal fatal flaw but the canker in the society at large: an open society regurgitating the hatred of its erstwhile oppressors, the whole ugly steaming mess exposed. (Can Verhoeven been thinking of Schindler‚Äôs own final-act crowd scene in a factory?) Nobody said it would be pretty, or subtle, but there it is, for better or worse as always with Verhoeven, a spectacle that can‚Äôt be undone.