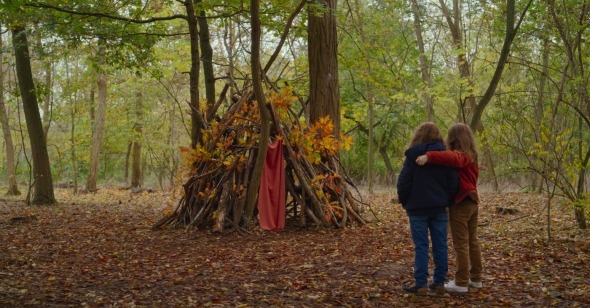 It‚Äôs one of life‚Äôs simplest and most substantial ironies that children will only ever know their parents as adults. To a child, the concept that a parent was ever their age is baffling, while for parents it can often seem like they‚Äôve barely crossed the threshold into adulthood. C√©line Sciamma‚Äôs Petite Maman brilliantly bridges the barrier established between generations, generously illustrating the power of empathy when it comes to understanding our forebears. This task is aided by a little dose of the supernatural, giving us the feeling that we‚Äôve entered the realm of childhood, that magical place where you can travel through time.

Time is in many ways the subject of Petite Maman, which opens with the ticking of a clock, suggesting the childlike domain of Fanny and Alexander, a film that likewise tries to understand the mysteries of adulthood through a child‚Äôs eyes. With three of her previous films, Water Lilies (2007), Tomboy (2011), and Girlhood (2014), Sciamma examines the hidden, experimental, and exhilarating connections between young girls and the friendships that transform them. After Portrait of a Lady on Fire‚Äôs depiction of another secret lair of sisterhood, this time between women in early adulthood, Sciamma has returned to casting children as her main subjects, this time connecting the dots between these younger and older worlds.

The 72-minute film is spare and economical, fitting for a story about the process of cleaning out a house‚Äîthe set itself disappears before our eyes bit by bit, and the film feels cluttered neither by ideas nor objects. The house belongs to eight-year-old Nelly‚Äôs grandmother, who has just passed away, and the film takes place in the days that follow as she and her parents empty out her small residence in the woods. It‚Äôs the same house where Nelly‚Äôs mother, Marion (Nina Meurisse) grew up, and the house brings back memories of her childhood, including a ‚Äúblack panther‚Äù that would appear at the foot of her bed. She asks Nelly, now sleeping in her bed, if she can see it, but there‚Äôs nothing there.

The relationship between mother and daughter is one often depicted on film, but perhaps never so lovingly as it is here. After leaving the nursing home where her grandmother had lived, Nelly shares an ‚Äúap√©ritif‚Äù with her mom, nibbling the little crunchy snacks like a chipmunk before feeding her from the back seat as she drives. Played by first-time actor Jos√©phine Sanz, Nelly is an only child with a cherubic face and the kind of frizzy strawberry blond waves one imagines might become brown and straight like her mom‚Äôs. While she still has a sense of innocence intact, she‚Äôs mature beyond her years, teasing her mom as they look at her old school books: ‚ÄúYou weren‚Äôt an ace at spelling.‚Äù Like her previous works, Petite Maman is interested in something beyond a heteronormative romance story, looking at a relationship between two girls‚Äîthis time, the possibility of friendship between a mother and daughter.

Nelly expresses a desire to go back in time early on, telling her mom that she didn‚Äôt say goodbye to her grandma the way she wanted to‚Äîshe hadn‚Äôt known it would be the last time. It keys into the childlike obsession with doing things over, with going back and fixing a mistake. ‚ÄúHow would you have liked to do it?‚Äù her mother asks. ‚ÄúLike this,‚Äù Nelly says, wrapping her arms around her. Sciamma has a particular skill for illuminating emotional truths‚Äîhere, the regret that comes with losing a loved one‚Äîwithout indulging in melodrama. Her restrained approach, coupled with cinematographer and frequent collaborator Claire Mathon‚Äôs soft, static camerawork, lets us sit with the words as they‚Äôre spoken, and rests on these evocative images without manipulating them. They‚Äôre enough on their own.

Mathon likewise succeeds in highlighting the otherworldly effects of autumn light on the house and the surrounding woods, the fiery reds and yellows of fall foliage and the way the sun enflames a corner of a wall as it begins to set earlier. It‚Äôs in this atmosphere of a transitional season that Nelly meets Marion, a fellow eight-year-old in the woods who we gradually come to realize is, in fact, her mother as a child. The rules of this universe aren‚Äôt explained, nor do we really care to have them elucidated. The simplicity of this discovery is presented as a matter of fact, to the point where even Nelly‚Äôs father isn‚Äôt surprised to see his daughter‚Äôs lookalike eventually emerge from around a corner.

The friendship that develops between Nelly and Marion is at first reserved to these magical woods, which resemble those occupied by the children of Tomboy. In Sciamma‚Äôs world, it‚Äôs always safe for children to play alone in the woods, which becomes a kind of protected space to explore unfamiliar territory. Marion is played by Gabrielle Sanz, Jos√©phine‚Äôs twin sister, and their resemblance seems to accelerate their friendship. Sciamma was striving for ‚Äúbold casting‚Äù when she chose sisters for these roles. ‚ÄúThe idea of the film,‚Äù Sciamma explains, ‚Äúsuggests a lot of questions. Is she your sister? Is she going to be your friend? Is she your mother? Are you her mother?‚Äù Nelly frequently asks her parents about the ‚Äúhut‚Äù her mother had built in the woods as a child, and is able to help her construct it, adding bright leaves to its exterior in a loving, decorative flourish. Nelly‚Äôs journey in time works to satisfy her craving for ‚Äúreal‚Äù stories about her parents‚Äô lives‚Äîshe yearns to know them as they really were. She finds out her mother was more like her than she could ever imagine.

Her grandmother, also named Nelly, exists in this world as well, and young Nelly is granted the gift of a second chance at saying goodbye. Seeing her grandmother (Margot Abasca) as a mother to Marion helps her to comprehend her mother‚Äôs pain over losing her, something that can be otherwise hard to contextualize for a young girl. Generations merge and overlap in the universe of Petite Maman, enabling a perspectival shift that helps us to understand our mothers, and their mothers too. In one of the strangest and most affecting moments in the film, Nelly tells young Marion that she had her daughter quite young, at 23. ‚ÄúI‚Äôm not surprised,‚Äù Marion replies. ‚ÄúI‚Äôm already thinking of you.‚Äù As they fall asleep, Nelly sees the shadow of the black panther at the foot of her bed.

Here, we start to see the story from Marion‚Äôs perspective, being let in on what the future holds for us: our child, our husband, how old we are when our mother dies (there‚Äôs no such thing as the grandfather paradox in Sciamma‚Äôs universe). At one point Marion asks what Nelly‚Äôs listening to on her headphones: ‚ÄúIs that the music of the future?‚Äù She lets her listen, and the song plays as the two explore the woods one last time, canoeing out to a pyramid in the middle of a lake. Sciamma wrote the lyrics for the original song, titled ‚ÄúThe Music of the Future,‚Äù with music composed by Jean-Baptise de Laubier (known professionally as Para One), who‚Äôs also collaborated with Sciamma on the soundtracks for all her films, including Portrait of a Lady on Fire. The song shares a similarity to the chorus of voices at the center of Laubier‚Äôs Portrait tune, and is meant to be timeless, according to Sciamma, like ‚Äúmusic for a cartoon that doesn‚Äôt exist.‚Äù It‚Äôs all held together by a soft, building techno beat, as children are heard singing lyrics in the future tense: ‚ÄúThe voices of kids will sing your dreams / The dream of being a child with you / The dream of being a child without you.‚Äù It‚Äôs a song that bridges generations, and that almost feels like it could bring you back‚Äîand forward‚Äîin time.