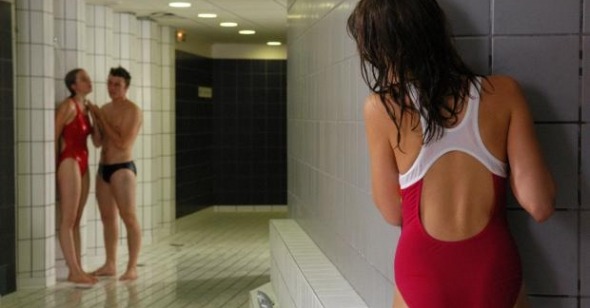 There are practically no adults in Water Lilies. None of any importance, anyway. Even its characters’ locus of activity and competition, the indoor public pool where they congregate for synchronized swimming rehearsals and performances, is rarely shown patrolled by anyone over the age of sixteen. Yet this isn’t like Peanuts’ off-screen cameos, in which intimidating adults spout uniformly indecipherable squawks. Films from the vantage point of young people typically depict parents and teachers’ crucial presence in their lives, but Water Lilies instead subtly fashions a world where girls navigate sites of personal exploration unhindered by adult supervision. In her debut French director Céline Sciamma lets her adolescent creations figure out their sexuality all by themselves. She more than pulls off the conceit and in the process manages to portray same-sex experimentation originally and without an iota of titillating lasciviousness.

This will likely make Water Lilies a hard sell for American audiences mostly impressed by wisecracking teenagers insulated by precious irony (Juno), movie-of-the-week parenting nightmares (thirteen), or losers suffering condescendingly dispatched hells of humiliation and embarrassment (the films of Todd Solondz). The film’s rhythms are patient and lolling, its characters awkward and conflicted, its sense of scale telescoped to that of a young person’s heightened alertness and bold unpredictability, and it ultimately dares to take adolescent girls seriously rather than consider them in terms of freakish pathologies. Marie (Pauline Acquart), Anne (Louise Blachère), and Floriane (Adèle Haenel) might well be the front and center Gallic counterparts to the supporting actresses of Paranoid Park—less entitled, more mature, but similar in their inexperience, cockiness, and vulnerability. Marie, undeveloped and shy, is friends with large, tomboyish Anne, though the former changes her focus to Floriane when she catches her first glimpse of the beautiful swimmer during a “synchro” performance. Floriane is one of those girls considered “advanced,” snubbed by other girls for “going over to the other side,” the boys’ side, and provocatively exhibiting her sexual confidence. Marie envies and loves her, though her initial attempts to cozy up to Floriane result in getting used as an alibi when the faster girl begins clandestinely rendezvousing with boys. Sciamma understands the fragile system of friendship currency so pivotal in the teenage social economy: Floraine wants boys, and needs Marie to be with them; Marie wants Floriane; Anne and Floriane want the same boy, François (Warren Jacquin); François wants sex, preferably from the much prettier Floriane, but in the all-too-true words of Animal House he’s “willing to trade looks for a certain morally casual attitude.”

It may seem inappropriate to quote a juvenile college romp to illuminate the complex dynamics of a sensitive art house import, but Water Lilies very consciously inverts teenage movie formula to great effect. The film features a loser going for an out-of-her-league hottie, a virginity-busting mission, locker room hi-jinks, a concluding party scene, even some lewd innuendo with common household foodstuffs. But Water Lilies isn’t a comedy. And it’s not quite a drama either, loyal as it is to the hazy boredom and locked-in hormones of summer love in the suburbs, here those lying outside of Paris. When Marie and Anne spit water at each other and roll over in laughter we’re seeing the last of their carefree play. Floriane comes between them, representing as she does the next step to adulthood. The irony is that Floriane feigns confidence, confessing to Marie that she’s actually afraid of boys and only kisses them “to wind up the bitches” and maintain her reputation as a “slag.” The approval or disapproval of others is the highest authority of teenage life, and Floriane, supposedly above such concerns because of her preternatural attractiveness, is just as influenced by its power as her timid friend and clumsy rival. So worried is she about what François might think of her status as a virgin that she asks Marie to break her hymen for her, forging a strong but not invincible bond, an incomplete link visualized by the girls’ out of frame positioning to begin the scene. Marie has already begun to ditch Anne due to the latter’s immaturity, and Floriane offers nightclub excursions and other thrilling encounters in the adult world, but her prior close encounters with her idol/object of affection had been mediated—kissing Floriane’s lipstick mark on a window pane or eating Floriane’s half-chewed apple found in the garbage. When the moment of physicality arrives it is only partly one of passion. It is still a “favor” and cannot take the place of the real closeness for which Marie longs.

In bringing the furtive language of such longing to our attention Water Lilies demonstrates Sciamma’s ability to write and direct young female characters with an assured knowledge of their communicative gestures and silent accusations. But it also demonstrates a young director’s overreliance on blunt symbols. Exchanges of totemic necklaces rightly work within the film’s high school drama milieu (Anne steals one for François; François then gives it as a gift to Marie), but Sciamma will often contrive situations, as when Marie climbs a playground gymnastics web or Anne buries her bra under a mound of dirt soon after Marie accuses her breasts of being “all fat.” It’s at these moments that the palpable environments of Water Lilies turn into overdetermined visual metaphors. Sciamma more convincingly portrays small hesitations and pranks—the fidgeting of feet, the popping of juice boxes, Anne’s perfectly conveyed admission that she’s “behind schedule in kissing.” The synchronized swimming routines also make for naturally meaningful rituals, with girls still grammar school–aged and others crossing over into the great unknown of puberty teaming up to execute precise movements in that ever-reliable signifier of innocence and purity, water. Water Lilies again inverts the cliché, as did Lucile Hadzihalilovic recently in the more mythical, allegorical Innocence, by making innocence and purity not only elusive, but essential to reject, if a teenager is to become her own woman, as unrealistic ideals. The film’s most important question, “Who cares about normal?” is therefore not merely rhetorical but a lead-in to the more important question: “What lies beyond it?”