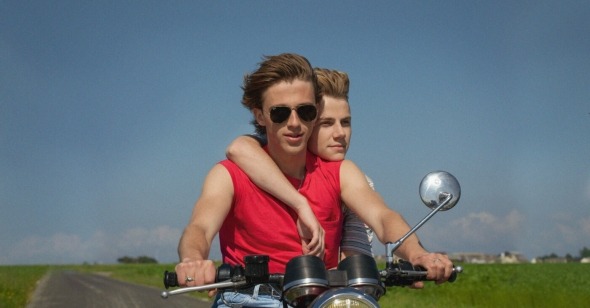 Song of Youth
By Kelli Weston

Fran√ßois Ozon‚Äôs Summer of 85 (√ât√© 85) announces itself as a story about a corpse, one that had a particularly ‚Äúterrible effect‚Äù on our epicene young lead, the 16-year-old Alexis (F√©lix Lefebvre), as he states in opening voiceover. ‚ÄúWhat interests me is Death with a capital D,‚Äù he claims, which is perhaps to say, what interests him is growing up. The tale that follows charts the end of‚Äîwhat is for him burdensome‚Äîinnocence, a largely winsome memoir of doomed first love based on Aidan Chambers‚Äôs 1982 novel Dance on My Grave, which so touched Ozon when he discovered it as a teenager that it very nearly became his first film. Despite Ozon‚Äôs nearly 20 features, Summer of 85 feels like a debut, considering its tonal clumsiness, clunky third act, and by now exhausted music cues (Bananarama‚Äôs ‚ÄúCruel Summer‚Äù and The Cure‚Äôs ‚ÄúIn Between Days‚Äù both make obligatory appearances). But the film also possesses the searing, unpolished vitality of his early work, buoyed by a vivid nostalgia (in 1985, Ozon himself would have been on the edge of 18). If the film ranks among the less refined of the director‚Äôs prodigious corpus, few are better suited to depict beachside sexual awakenings or, equally, the rich site where fantasy and intimacy intersect.

This summer finds Alexis‚Äîwho prefers to go by Alex‚Äîadrift in his picturesque Normandy seaside village, uncertain about the future. His working-class parents (Isabelle Nanty and Laurent Fernandez) insist he find a job rather than continue his studies; meanwhile, his literature professor (Melvil Poupaud) encourages him to stay in school with suggestions of his promise as a writer. Things suddenly take an exciting turn when Alex‚Äôs boat capsizes in the middle of a storm, and he is rescued by the swaggering David Gorman (Benjamin Voisin)‚Äî‚Äúthe future cadaver,‚Äù as per the voiceover narration‚Äîwho floats out of the mist, lightning flashing behind him like a hero in a fairy tale. The two begin an idyllic summer romance, clouded by the film‚Äôs ominous opening, where Alex begins his account of their love affair in police custody.

For too much of the film‚Äôs runtime, Alex is implicated in David‚Äôs demise and, frankly, efforts to establish a mystery framework clash with an otherwise earnest meditation on the heights and perils of adolescence: a lush, vibrant plunge into teenage reverie, entirely and exquisitely shot on 16mm to evoke not just the past but also Alex‚Äôs romantic musings, for his world and the screen become grayer once David is gone. Later we come to realize he is writing about their relationship, at the behest of his professor. David‚Äôs quixotic entrance, his somewhat inscrutable character, begin to make sense, even before Alex tentatively wonders, ‚ÄúWe invent the people we love?‚Äù Indeed, David is repeatedly cast by Alex as the ‚Äúfriend of his dream,‚Äù and it is when he refuses to conform to Alex‚Äôs expectations that the trouble begins. Certainly, hints of the real David peek through. For instance, with the recent death of his father, he has had the brush with mortality that Alex so desperately and naively covets. And he may or may not himself be seeking reprieve from that grief‚Äîmuch to Alex‚Äôs chagrin‚Äîin multiple lovers.

The film loses much of its energy after David, strikingly embodied by Voisin, exits. As the parallel timelines come together, the second half proves languid and heavy-handed, although characteristic glimmers of magic still emerge. The scene where Alex realizes that he may have idealized some dimensions of David features a poster of Mike Newell‚Äôs mummy flick The Awakening (1980), perhaps a nod to Alex‚Äôs obsession with death and corpses. More specifically, the scene follows a sequence where Alex disguises himself as a girl (donning a dress in the same pattern as the auspicious frock of Ozon‚Äôs 1996 short A Summer Dress) to fool the coroner, only to throw himself hysterically across David‚Äôs dead body. But this late appearance of the director‚Äôs trademark wit cannot redeem an ultimately uneven script with its hollow execution of not especially complex themes. Although Summer of 85 boasts all the classical traces of Ozon‚Äîthe black comedy, the eroticization of national identity and class tension, looming maternal figures (here, principally Valeria Bruni Tedeschi as David‚Äôs offbeat, mercurial mother)‚Äîit‚Äôs also graceless. Perhaps purposefully‚Äîthe story belongs to a teenager, after all; but Alex‚Äôs fixations on death and love (complete with a mention of French poet Paul Verlaine, who famously shot his lover Arthur Rimbaud) feel especially contrived, particularly when death so often lurks behind passion and far more intriguingly in earlier films such as Swimming Pool (2003) or Young and Beautiful (2010). So, too, the noirish elements that plague this feature were far more successfully integrated in those films, and he has yielded more sophisticated ventures into fantasy as fundamental to desire, and ultimately survival, in Frantz (2016) and Double Lover (2017).

Notoriously prolific, Ozon is perhaps more meaningfully described as a promiscuous author, with no fidelity to genre or style. With the occasional exception‚Äîe.g., his 2018 film Grace of God‚Äîthere is a recognizable hunger, a vigorous curiosity about gender and love and sexuality, and perhaps an overarching argument for the innate queerness of all these things; or at least, he consistently seeks to displace oppressive normative structures, for his characters are most frequently defined by their decisions to resist or submit to these culturally constructed dynamics.

Apropos, in Summer of 85, the main characters‚Äô sexuality is refreshingly incidental. Their romance blossoms with almost no conflict, although Alex‚Äôs alienation from his parents is likely due in part to this perceived difference. During one of the film‚Äôs strongest moments, he shares a tender scene with his mother, in which some of this distance is quietly bridged as she gets as close as she can to acknowledging and accepting his sexuality. For all its unwieldy parts, Summer of 85 does poignantly attend to the beauty of these passing connections, to grief as the clearest sign of love and living.