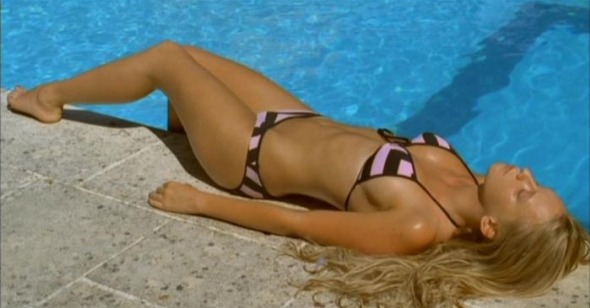 ‚ÄúI‚Äôm not the person you think I am.‚Äù These are the first words we hear from Charlotte Rampling as Sarah Morton, an English crime fiction writer who churns out the kind of paperbacks that people read while riding on mass transit. Recognized from a book jacket by one of her army of graying devotees, she coolly denies her identity, but her disavowal might as well go double for her director, Fran√ßois Ozon who, with Swimming Pool, has decided to set the record straight. After progressing along a lengthy celluloid trail of elusions, revelations, and double-back sidesteps, it would appear that the strange case of Mr. Ozon‚Äôs filmographic trajectory is finally drawing to a close. Thus far, the anarchic zig-zag of his oeuvre has defied the drawing of any conclusions, a remarkably sustained evasion considering his rapid-fire output. It reads as a deliberate gesture of indifference to critical reaction to follow the cool tonal balancing act of Under the Sand with a giddy train wreck of gay aesthetics like 8 Women, wrapping sub-A&E murder mystery, a gaggle of menopausal French divas, and Fran√ßoise Hardy torch-song karaoke into an tacky bundle of second-hand Vincente Minnelli wallpaper. But now, as in the denouement of any classical detective story, Ozon has gathered the usual suspects, including Sand heroine Charlotte Rampling and Ludivine Sagnier, from Water Drops on Burning Rocks and 8 Women, for an unmasking. A swimming pool substituting the traditional antique dining room table, we‚Äôre finally to be told just who exactly it is that‚Äôs been making these films.

The narrative of the director‚Äôs latest begins with Ms. Morton living a quietly crushing existence with her aged father (yet another of Ozon‚Äôs diminished, distant, or invisible patriarchs), and Rampling imagines her as a taut, uncomfortable creature; through the film‚Äôs opening passages she moves like some great frightened bird on her stiff, long legs. When her publisher offers her a restorative retreat at his vacation house in the South of France, Morton, irritated by a yearning for more expressive freedom than her long-running Inspector Dorwell series can provide, is easily convinced to escape from oppressive London. But after arriving and enjoying a short space of quiet repose in the lucid Provencal sun, her solitude is interrupted by the unexpected arrival of Julie (Sagnier), her publisher‚Äôs delinquent daughter. It‚Äôs an inherently uncomfortable co-existence: Rampling, with her china-patterned cotton nightshirts and complexion like teapot dregs, is a caricature of the purely cerebral British woman-of-letters, that willowy, wind-tossed, Woolf-ish thing whose primary erotic thrill is a weekly trip to the stationary store in Swindon. Wrapped in her terrycloth Pimkie shorts and nothing else, Sagnier, by contrast, is the epitome of shit-faced, scooter-racing, young Continental clubtrash. She‚Äôs a fuck-anything hedonist who‚Äôs all hoop earrings, teased-out honeyed hair, chipped nail polish, and generously proportioned baby fat slick with sunscreen and lip gloss. In their shared days at the poolside, there emerges a dense atmosphere of unexpressed something between these contrasting poles of femininity that blossoms into desire, covert understanding, and yes, of course, violence.

The bulk of Swimming Pool is built around a framework of such diametric opposites in friction: Age against youth; prudishness against exhibitionism; commerce against art; fact against fiction; Rampling‚Äôs subsistence diet of yogurt against Sagnier‚Äôs extravagant taste for foie gras and cognac; the countryside‚Äôs bucolic, cool greens against the saturated red of the room where Julie‚Äôs soiled revolving-door mattress lies. Once established, these lines of demarcation begin to blur, and Sarah Morton‚Äôs defenses erode, leading her from dietary transgressions into downright deviance. There‚Äôs much to admire during her personality‚Äôs transmigration; the movie‚Äôs got a great, patient, lived-in pacing for its first half (when you‚Äôre watching Rampling crawl under a desk to plug in her laptop, you realize that this is a filmmaker who‚Äôs in no hurry). And there‚Äôs at least one goofy-great moment, as Sagnier coaxes Rampling to starchily bop around to a thumping techno song with the refrain of ‚ÄúLet‚Äôs do it!‚Äù resulting in the best bit of ‚Äúuptight person dancing‚Äù humor since Henry Fonda‚Äôs stiff-backed two-step in My Darling Clementine.

Despite all of this, there‚Äôs not much feeling of revelation‚Äîthe two characters are so broadly archetypal that, for all the actresses‚Äô efforts, they can‚Äôt escape the impression of grudgingly serving some big, waterlogged idea. The movie can‚Äôt seem to relax and forget that it is Ozon‚Äôs portrait of the artist as a middle-aged female detective novelist; suffice to say that the book that Sarah Morton finally produces in the aftermath of her vacation is our movie, Swimming Pool, born during a 100-minute realignment that ends with the imagined and the corporeal finally looped around and reconciled until it‚Äôs no longer entirely clear which is which. Just as so much of the director‚Äôs filmography is concerned with the idea of bisexuality and with exploring the arbitrary nature of sexual differentiation, the cockeyed handshake between realism and artifice in Swimming Pool comes as a statement of aesthetic androgyny. And who, then, is Fran√ßois Ozon? Only the sum total of his next film, of course.

Swimming Pool is the precise hermetic seal to a frenzied six years of feature filmmaking, a group of texts whose built-in mismatching is an integral part of their foggy artistic manifesto. Their director has created a universe of precarious ambiguities in his two-faced ouevre, but in reviewing them we still find nothing to equal the punchline of rusty menstrual blood that ended his 1994 short Action v√©rit√©. As undeniably of a piece as his disparate work has become when tied in the shiny bow of his latest, Ozon‚Äôs ongoing mission to elucidate the inexpressible leads him increasingly into an elegant but anemic corner. He has set his focus on the very concept of mystery and uncertainty, but is proving increasingly inept when dealing with the finer human mechanics of his inquiries. And so we are left with that strange case of Fran√ßois Ozon, more vexing than ever despite its solution: he‚Äôs just in his mid-thirties, more creamily handsome than any director has a right to be, and unquestionably gifted. Given his love of defying expectation, could we now ask for anything less of him than starting over?