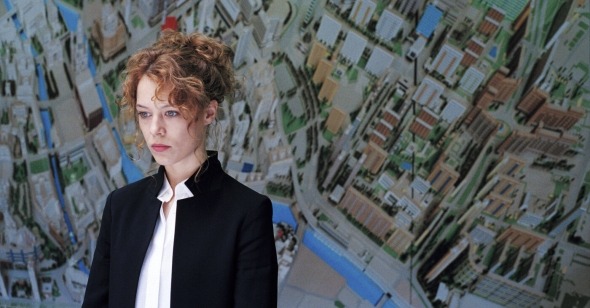 Water is a powerful lure in the films of Christian Petzold. In The State I Am In (2000), a character quotes from the famous opening passage of Moby-Dick about the eternal pull of oceans and rivers, in which we all, like the doomed Narcissus, see “the ungraspable phantom of life.” While the sea may promise escape or renewal, it more often means the end: many of Petzold’s characters have died on beaches, riverbanks, the shores of lakes, or under the waves (see Pilots, Cuba Libre, The Sex Thief, Wolfsburg, Yella, Jerichow, and—maybe—Transit).

With Undine (2020), Petzold goes further, diving below the surface to find a primordial, underwater world apart from the transit zones and non-places of modern capitalism—highways, hotels, office buildings, malls—where so much of his cinema has been set. The film has been announced as the first of a new trilogy drawn from fairy tales and inspired by the elements (next up: fire). This is the story of Christophe (Franz Rogowski), an industrial diver who falls in love with Undine (Paula Beer), a 21st-century incarnation of the legendary water sprite whose sojourn on land depends on a stark contract: if her human lover betrays her, she must murder him and return to her native element.

We meet Undine Wibeau sitting at a chic outdoor café in Berlin with Johannes (Jacob Matschenz), the blond boyfriend who has just dumped her. When she reminds him that she will have to kill him unless he reconsiders, the threat sounds unhinged and ludicrous in this setting. But while this Undine has a laptop and a shell-pink flip-phone, lives in a utilitarian flat, and works as a guide in a historical museum, there is no ambiguity about her nature. The story plunges calmly into the supernatural, taking a matter-of-fact approach to enchantment.

When Christophe and Undine first meet in that same café, their coup de foudre is precipitated by a shattering fish tank that leaves them drenched on the floor amid shards of glass and flopping fish. Danger lurks in a lighted swimming pool that shines turquoise in the dark. Water means love and death: it is also, in its glistening reflective surfaces and fluid currents, the most cinematic of the elements—as Jean Renoir long ago observed. The underwater scenes in Undine were the first to be shot, Petzold has said, in order to immerse the actors in a different physicality, the dreamy slowness and weightlessness of swimming. In the murky depths of a lake, they float like Chagall’s flying lovers, sending up chains of shining bubbles. Ghosts of many earlier films drift through these sequences: the part in Jean Vigo’s L’Atalante (1934) when the bereft husband dives into the Seine to see a radiant vision of his absent bride, and the unforgettable image from Charles Laughton’s The Night of the Hunter (1954) of Shelley Winters at the bottom of the river with her throat cut, her hair streaming out like waterweed. The scenes of Christophe in his diving suit, repairing a dam that looks like a ruined undersea city, were inspired by Richard Fleischer’s 20,000 Leagues Under the Sea (1954), with its eerily poetic, slow-motion funeral on the ocean floor.

Such echoes are nothing new. Petzold’s films have deftly repurposed elements from many earlier titles, including Vertigo, Detour, Carnival of Souls, and The Postman Always Rings Twice—always with a twist, never as a remake or pastiche. In a 2008 interview with Marco Abel in Cineaste, he explained, “I simply enjoy the way American cinema deals with American mythologies: rather than poking fun at them, they continue working with them. In Germany, however, cinema stopped working with mythologies ever since the fascist period, when the Nazis appropriated German mythology. Which is why American cinema is something like a home for me in this respect.” There have been hints of Germanic folklore in the vaguely menacing, darkly enticing woods of Ghosts (2005), Jerichow (2008), and Dreileben: Beats Being Dead (2011), but Undine finally brings them to the surface, summoning the ancient marsh that was drained to build Berlin.

The city we see on screen is pleasant, clean, and characterless. From the balcony of Undine’s short-term rental—a dorm-like space with spartan, IKEA-style furnishings—the view is a mass of generic, blocky buildings and tiny trains slithering past. In the museum where she works, the destruction and rebuilding of Berlin is mapped out in miniature architectural models, color coded to show old, new, and planned buildings. She rattles off polished spiels about how the city has been shaped by wartime bombing, political debates, division, and reunification. References are dropped to “GDR nostalgia” and unbuilt utopian city plans; a long speech about the Humboldt Forum winds through ruins and reconstruction, the “phantom pain” of a lost city center, historical recreation as a hollow shell demonstrating the impossibility of progress. These dense mini-lectures are inserted periodically in the film, dry cerebral counterpoints to the story’s lush romanticism. Petzold’s films have always suggested the ways that our lives, like city plans, are shaped by historical forces, and also by narrative structures drawn from melodrama and the revenge thriller.

In addition to his movies, Petzold has written and directed several episodes of Polizeiruf 110 (“Police Call 110”), a venerable TV detective series that debuted in 1971 on East German television. In the episode “Circles” (2015), a detective visits a suspect whose hobby is building miniature models of Edward Hopper–like scenes; when the cop observes that in the vast model train set there are none of the usual loops, the man explains that he is trying to avoid clichés and create something new instead of circling the same world. But clichés, the detective points out, are often true. Petzold has never been afraid of narrative conventions and formulas. In a Zoom interview from October 2020, when Undine had its U.S. premiere at the New York Film Festival, he argued that cinema does not have to be original: that it is a medium of the people, of myth, songs, and genre, of stories retold in new voices and places, an art form that dwells “in the cheap movie houses down by the train station.”

This commitment to genre and storytelling has always been balanced by Petzold’s interest in the quotidian. We get to know his people by watching them perform routine tasks and navigate interstitial, non-dramatic parts of life. He looks for actors who can drive a car or pack a suitcase naturally, and here, as in Transit (2019), Beer and Rogowski convey more through physicality and glances than dialogue (Rogowski is also a dancer and choreographer). A fondness for observing his characters in transit—driving, walking, or riding—is another of the director’s trademarks, and he is especially interested in the way women move through the world; Undine spends a lot of time riding on trains, shuttling through blandly pretty towns and landscapes. But we are not allowed to overlook the inherent strangeness of watching other people go about their lives; we’re often reminded of the relationship between the performer and the spectator, the watcher and the watched. Undine’s rehearsed and memorized talks continue Petzold’s interest in people performing in contrived and pressured contexts: the video-recorded job interviews in The Sex Thief (1998), the bizarre film auditions in Ghosts, the venture capital pitches in Yella (2007).The footage from a body camera on Christophe’s diving rig, which he replays on a laptop, recalls the grainy, black-and-white security camera footage that recurs in Ghosts, Wolfsburg (2003), and Beats Being Dead, evoking surveillance, our double lives as images, and the spectral traces of memory.

But while characters in previous films have often been shadowy or ambiguous, in this latest effort they feel somewhat underdeveloped. Aside from her profession, there is little to distinguish Undine; Christophe is just a sweet, devoted guy, and their romance is an uncomplicated idyll of kisses and cuddles. Johannes and Monika (Maryam Zaree), the diving colleague who also loves Christophe, are little more than ciphers. Perhaps this is in keeping with the fairy tale motif, but at times the film is more successful in its ideas than as actual drama. For a story about abandonment, revenge, sacrifice, and death, it all seems oddly smooth and pleasant. It goes down easy—a little too easy when compared to the psychological complexity and challenging ambivalence of Barbara (2012) and Phoenix (2014), the violent collisions of class and sex in noir-stained films like Wolfsburg and Jerichow, or the haunting sense of loss and marginalization in Cuba Libre (1996) and Ghosts.

Still, it’s a tonic to see such an exercise in intellectual romanticism, untainted by cynicism or irony. The notion that our anonymous, rootless world of mobile phones and freelance gigs could harbor mythical creatures for whom love is a matter of life and death is a delicious conceit. It is illustrated with a curious fusion of the ordinary and the inexplicable, the solid and the fluid. Repeated images of rupture foreshadow dangers in a seemingly innocuous romance, from the smashed aquarium to a knocked-over wine glass that leaves a sinister red stain on the wall of Undine’s flat, to a totemic figurine of a deep-sea diver that falls and breaks a leg.

Hints of mystery and magic began to appear in Petzold’s films with Transit (2019), a film about people adrift on a tide swirling with random miracles and disasters, a film riddled with disappearances and the tantalizing possibility of reappearances. Following refugees desperately trying to flee Europe ahead of the Nazis, it is the ultimate vision of people unable to either settle or escape, the state so many of Petzold’s characters are in: caught between thwarted dreams of flight and failed hopes of a home. In Transit, the melodramatic staples of betrayal and obsession were entangled with a nightmare of bureaucratic pettiness and indifference. In Undine, they are framed by the implacable rules of the fairy tale. What happens if the betrayed water-nymph, instead of killing her faithless lover, meets someone else and decides to forget about the curse?

Many cultures have imagined spirits that take on human form and marry unsuspecting men (or, less often, women). The premise of a bewitched female whose humanity is contingent on a man pledging his love and fidelity turns up in the ballet Swan Lake and Hans Christian Andersen’s The Little Mermaid—in both cases, he fails to come through. The original tale of Undine is about what happens when a man breaks his promise; Petzold’s version is about what happens when a woman breaks the rules, trying to rewrite the story and escape her rigidly defined destiny. For one crucial moment near the end, the camera takes her point of view, giving her if not the last word, then at least the last look—at a world that can never be hers.