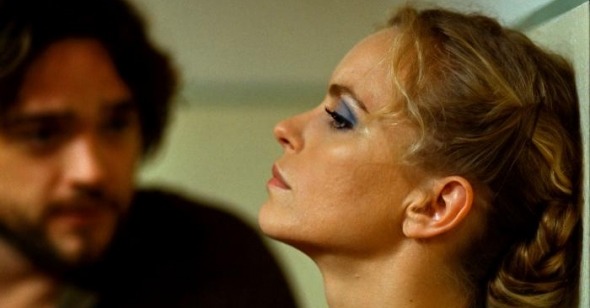 It‚Äôs fitting that Christian Petzold, leading light of the ‚ÄúBerlin School,‚ÄĚ should have set goodly portions of his last two films‚ÄĒlast year‚Äôs semi-pseudo-serial-killer thriller Beats Being Dead (his contribution to the tripartite Dreileben anthology) and his latest, the GDR-era drama Barbara‚ÄĒin hospitals, as his unfailingly well-turned works virtually invite the epithet ‚Äúclinical.‚ÄĚ It‚Äôs not that Petzold is a cold fish so much as that, like the medical functionaries who are the protagonists of these most recent films, he is a technician who works with human material. Since his 2000 debut The State I‚Äôm In, Petzold‚Äôs virtues have remained remarkably constant: cleanly etched compositions which endeavour to be striking without drawing undue attention to themselves; an unerringly precise sound design, striking a careful balance between ambient noise, pointedly deployed music and staccato, sharply declaimed dialogue; and small-scale narratives that strive to combine a cultivated ambiguity and open-endedness with subtle but decisive epiphanies.

Pointedness, precision, cleanliness‚ÄĒif one detects a certain amount of ambivalence in the use of said terms, one would not be mistaken. Too often, to these eyes at least, Petzold‚Äôs precision seems merely neat, his ambiguities calculated, his ironies pat, his cleanliness sterile. If not quite the reductio ad absurdum of the contemporary international minimalist style, Petzold is at least a good argument for its potential limitations. If the Dardennes, to cite the paramount example, employ ellipsis and a radical economy of means to forge a revelatory way of looking at the world, Petzold‚ÄĒwhose interests and ambitions, to be fair, do not necessarily lie in the same areas‚ÄĒcrafts relatively sturdy fictions whose portentously unspoken implications scarcely resonate past the rolling of the closing credits.

All that said, it‚Äôs not as if we are so rich in skillful cinematic craftsmen that we can simply write off one with such evident, effortless talent. If the roundly acclaimed Jerichow (2007) showed Petzold at his most trite, simplistically impasting his homeland‚Äôs ever-charged immigration issue upon a redux of The Postman Always Rings Twice, his assuredly elliptical storytelling has some nicely atmospheric purchase on the police-state scenario of his latest. Set in an unnamed East German town on the coast of the Baltic Sea, Barbara focuses on the eponymous heroine (played by Petzold‚Äôs perennial star Nina Hoss, her severe blonde beauty tending ever more towards severity), an accomplished Berlin doctor banished to provincial purgatory following her incarceration for unspecified reasons‚ÄĒthough as Petzold quickly makes clear (with such speed that one wonders why he need bother being elliptical at all), it most certainly has something to do with her desire to emigrate from this socialist paradise to the decadent decay of the West. Allocated a spare apartment that is regularly searched, along with her more private recesses, by the local Stasi official (Rainer Bock, familiar face of deceptively anodyne menace from Haneke‚Äôs The White Ribbon and the gangster riff In the Shadows by Petzold‚Äôs fellow Berlin Scholar Thomas Arslan), Barbara is assigned to duties at the local hospital, where her frosty manner and big-city credentials naturally incite resentment from her colleagues. The exception is her new boss, the shaggily handsome Dr. Reiser (Ronald Zehrfeld), who quickly takes both a personal and professional interest in his new charge for her medical expertise, surprisingly sympathetic bedside manner‚ÄĒshe immediately soothes and befriends a hysterical young patient, Stella (Jasna Fritzi Bauer), an escapee from a workhouse for wayward youth who has contracted meningitis after hiding in tick-infested fields for six days‚ÄĒand not least, because his marginal but relatively secure career is dependent upon his work as an informant for the Stasi, following a professionally ruinous incident during his tenure in Berlin.

It is in limning the pervasive atmosphere of suspicion and complicity in communized central Europe that Petzold‚Äôs studied, spare style is at its most effective. Keeping period signifiers to a minimum and letting them slowly creep in as the narrative progresses, Petzold renders the East German eighties in the same brusquely matter-of-fact manner as any of his contemporary settings‚ÄĒa useful and commendable strategy that renders his characters‚Äô historically specific dilemmas immediate, rather than encasing them in the quaintly periodized amber of the swelling GDR-nostalgia industry. (The good old, bad old days of East Germany received yet another fond salute this year with a tony festival item called Shores of Hope.) While entrapment is the film‚Äôs overriding theme, Petzold quite understandably grasps that a universally carceral society functions because everyday life, such as it is, can in most instances go about seemingly undisturbed by the state‚Äôs imposition‚ÄĒeven as the nature of every single autonomous activity is consciously or unconsciously conditioned by the weight of that same omnipresent state. Unlike his Oscar-endowed countryman Florian Henckel von Donnersmark, Petzold actually pays some attention to the lives of others: Barbara is dotted throughout with marginal characters‚ÄĒmotor-biking teenagers, nocturnal vegetable poachers, helpful farmhands, reticent provincial matrons‚ÄĒwhose very normality epigrammatically attests to the abnormality of the world they inhabit.

As always, however, Petzold‚Äôs interest is more personal than societal, which would not be a problem if his insular little dramas were not so thoroughly packaged, their mechanics not so transparently visible. Meeting clandestinely with her wealthy, border-hopping West German lover, who is arranging her seaborne defection to the Free World, Barbara is more than ready to call it splitsville with Real Existing Socialism. (‚ÄúYou can‚Äôt be happy here,‚ÄĚ she firmly tells her paramour when he suggests that perhaps he could set up shop with her on the East side of the fence.) Obstacles arise, naturally, and with quite staggering speed: Barbara‚Äôs dedication to the freedom-yearning and pregnant Stella, who is remanded back to custody after her stay in hospital; the mysterious case of a young man resuscitated from a suicide attempt, whom Barbara soon joins Reiser in suspecting may have a cerebral contusion that will require critical surgery; and, of course, the growing affection between Barbara and that shaggy-handsome colleague.

As all these threads come together on the very day that Barbara is supposed to make her escape (!), it isn‚Äôt hard to guess the kind of tough choices our once self-interested protagonist will have to make, nor what their outcome will be. Petzold‚Äôs tightly wound, well-oiled little narrative exercises proceed with all the lockstep predictability of a metronome; one can almost count the dramatic beats as our heroine dutifully makes her way along her preordained arc. Petzold evidently believes that his expositional reticence and studied flatness of tone gives each crucial action that much more force, each utterance a more resonant echo of unspoken depths; too often, these merely italicize the obviousness of his dramatic construction and the shallowness of his supposed nuances. (The nadir of this is a late scene in the home of the stone-faced Stasi man, which will surely startle the unreflective with its revelation that the secret police have feelings too.) The ironic reversal of terms at the end of Barbara, which tidily inverts its heroine‚Äôs definitions of happiness and freedom‚ÄĒreinforced by the almost smug inclusion of R&B outfit Chic‚Äôs 1978 track ‚ÄúAt Last I Am Free‚ÄĚ over the hard-cut-to-black credit crawl‚ÄĒis pure and simple (emphasis on simple) melodramatic satisfaction; it‚Äôs as feel-good an ending as that of The Lives of Others, and just as unrevealing of the realities of its period or its people. Stopping as it began in media res, Barbara attests not to the unseen continuation of these lives beyond the limits of the film‚Äôs duration, but to the deliberate limiting of these lives to the functional necessities of this smartly engineered, reasonably involving, ultimately arid film.