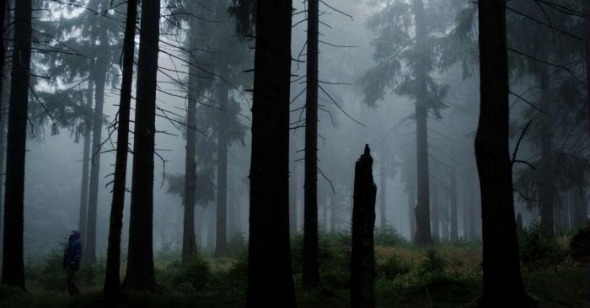 Three Lives and Only One Brutal Murder
By Leo Goldsmith

The bliss of a pair of young lovers is violently interrupted by the reappearance of an old flame; a policewoman’s investigation is complicated by the discovery of a love triangle from her past; an escaped convict and a detective on sick leave each return to the scene of an old crime in search of a missing link. A trilogy of films, each of which plays upon figures of three, Dreileben forms a series of subtle repetitions and triangulations of characters and events, unholy trinities and ménages à trois. Even in the film’s title—the name of a fictional town that serves as the films’ setting, translating as “three lives” in English—there’s an almost superstitious numerological conceit, suggesting a strange dialectical calculus at work, a multiplication of narratives and perspectives.

The fictional location of these films supposedly lies in Germany’s grüne herz, its “green heart,” the dark, mythic woodlands of the state of Thuringia in the country’s center. As the setting for a project which grew out of a friendly but spirited debate on the state of contemporary German cinema by three of the country’s prominent filmmakers—Christian Petzold, Dominik Graf, and Christoph Hochhäusler—this town could serve as the imaginary crossroads of a national cinema, a battleground for these filmmakers’ interwoven concerns about cinema versus television, realism versus genre, image versus narrative. But the aesthetic questions addressed by this triptych aren’t just the provincial concerns of a national cinema; rather the contradictions of cinematic form and function suggest that the “three lives” indicated by the film’s title have immense import for international cinema generally.

Although born to a large extent out of film criticism and debate, the Dreileben films never feel engineered or studied, partly because of their explicit goal of expanding the possibilities in film form across art-house and mainstream genres. Each of the films plays on this border between cinematic art and commerce with subtly and ingenuity. Petzold’s Beats Being Dead, the trilogy’s first entry, begins in the bittersweet idylls of young love, tinged with the director’s characteristically subtle flavors of class and ethnicity, before veering into slasher-film territory. Don’t Follow Me Around unpredictably weaves between the straight-ahead course of Graf’s usual policier genre and an almost screwball saunter down memory lane with old friends and lovers. Hochhäusler’s One Minute of Darkness further plumbs the depths of the crime thriller, but burrows deeper down rabbit-holes of hallucinatory psychodrama and even fantasy. In all their individual and collective multiplicity, the films operate not so much in the service of narrative closure or customer satisfaction as in the spirit of cinematic intervention and aesthetic dialogue.

The Dreileben project began with an e-mail exchange between Graf, Hochhäusler, and Petzold (later published in the pages of the German-language film magazine Revolver, of which Hochhäusler is a founding editor) about the aesthetic conventions inherent in the “Berlin School,” a loosely collected group of filmmakers that has arisen since the 1990s. (A translation of the exchange is available here.) Originally coined to describe the work of graduates of the DFFB, the German Academy of Film and Television Berlin, including Petzold, Angela Schanelec (Marseilles, Afternoon), and Thomas Arslan (Dealer, Vacation), the “Berlin School” designation has since expanded to encompass a younger “second wave” of German filmmakers. Many of these younger artists—like Maren Ade (The Forest for the Trees, Everyone Else), Ulrich Köhler (Sleeping Sickness), and Benjamin Heisenberg (The Robber; also a cofounder of Revolver and frequent cinematic collaborator of Hochhäusler’s)—have emerged from other film schools and even work in different regions and countries, further diluting the coherence of an already tenuous moniker.

And yet, there remain certain consistent themes and aesthetic strategies that bind the so-called Berlin School together, even if, in recent years, critics have tended to define it more in terms of what it isn’t than what it is. Specifically, these directors tend to avoid the sort of grand themes and historical narratives represented by more internationally renowned and award-winning German films, like The Lives of Others and Downfall. Even if it often obliquely addresses the nation’s Nazi and state-socialist histories, Berlin School cinema tends to focus on present-day characters whose personal histories and class positions, while central to the films, are revealed more elliptically through precise, minimalist narrative means typical of contemporary international art cinema. As a jointly authored history of the group at Senses of Cinema neatly summarizes, “the topmost commandment of the Berlin School [might be] a proscription of manipulation—of reality and of the observer. From this, everything else follows: a commitment to observation, a prohibition of intervention [and] a concept of representation which wishes to cure actors of acting, the camera of autonomy, montage of becoming authoritarian and narration of lapsing into topoi and clichés…. It is the world that should appear: original world. Reality is fetish.”

On the one hand, this position demonstrates a resistance to the seductive illusions of commercial cinema (especially to the popular mainstream comedies that Eric Rentschler has called the 1990s’ “cinema of consensus”), a stance aligned with that of filmmakers and sometime DFFB teachers Harun Farocki and Hartmut Bitomsky. (Since he studied at DFFB from 1988 to 1994, Petzold has often enlisted Farocki as a screenwriter and script consultant on his films.) On the other, the Berlin School aesthetic represents a reluctance to commit fully to a theoretical cinema, driven by an explicit politics or a semiotic understanding of film images that beg to be decoded, instead favoring those works that don’t exactly eschew politics but rather allow it to reveal itself with all its inherent nuances and complexity.

If Christian Petzold often exemplifies the strengths of the Berlin School, it is perhaps because of the way he allows sharp compositions and precise editing to reflect what he terms “a melancholy of the new bourgeoisie” of post–Berlin Wall, European-Unionized Germany. This melancholy is clearly felt in his breakthrough film, The State I Am In, in which a pair of ex–Red Army Faction revolutionaries return to Germany after many years on the lam with their antsy, materialist teenage daughter, and in Jerichow, which recasts James M. Cain’s The Postman Always Rings Twice as an allegory of class strife and immigrant entrepreneurialism in the former GDR. While each of these films plays with cultural tropes and genre conventions—terrorist chic and film noir, respectively—Beats Being Dead takes this strategy still further, encoding its Russian doll narrative with hints of the social and political. Johannes, a young man conducting his compulsory national service at Dreileben’s hospital, soothes his heartache for his boss’s blonde, sports-car-driving daughter with a young, working-class Bosnian émigré, whom he saves from her loutish biker boyfriend. What begins as a deceptively sunny love story soon splinters under the weight of cross-class suspicions and misunderstandings, incisively captured in increasingly chilling set pieces. As his wont, Petzold closes the film with a shock to the restrained system of relations he’s established, though this conclusion—an explicit nod to Carpenter’s Halloween, complete with killer-cam POV shots—is as lurid a descent into genre territory as the director has yet ventured.

This unabashed gesture towards genre cinema marks the decisive break in Dreileben’s arc away from the composed realism of typical Berlin School cinema and into something more multiplicitous and unhinged. Indeed, it’s this aesthetic that touched off the debate between the filmmakers in the first place. Dominik Graf, born in 1952 (eight years before Petzold; twenty before Hochhäusler) and active in cinema since the 1970s, represents a slightly older generation of post–New German Cinema filmmakers, having sustained his career mainly on television with a number of well-regarded police dramas. An advocate of the well-crafted narrative and witty dialogical interplay between characters, Graf vocally took issue with the sort of mannered, hermetic auteur film he sees deployed by the Berlin School, a style marked by a knee-jerk distrust of language and communication, an emphasis on surface and observation over traditional character development, and a total lack of humor. Glossing Graf’s criticism, Hochhäusler notes, “The younger German filmmakers were creating too much of a certain kind of cinema that he called ‘Snow White films’ with lifeless people waiting under glass, which he couldn’t watch anymore.”

As if to demonstrate his point, Graf plunges right into Don’t Follow Me Around with densely scripted scenes, emotionally messy characters, and a totally unguarded sense of humor that’s by turns bitingly satirical and playfully slapstick. Even the look of the film is different from the entries that precede and follow it: whereas the others are shot in crisp digital video, Graf’s episode opts for a soft-grain Super 16, giving it the rough-edged look of an old television drama. This aesthetic feels appropriate to Graf’s story, which follows police psychologist and single mom Johanna on her visit to Dreileben to investigate local police corruption. Here, Johanna stays in the home of an old friend, Vera, through whom she begins investigating details of her own past with a lover the two women shared. Long-buried secrets bubble to the surface, like the little historical traces of World War II found in the house that Vera’s husband is still busy renovating, and soon the two friends are back into old patterns of passivity and barely concealed jealousy. Graf deftly handles all of these nuances, carefully modulating complex, mercurial performances that could have easily veered out of control in lesser hands. More importantly, it performs its genre deconstruction in a different direction from that of Petzold’s entry, building melodrama on a police procedural scaffold (and vice versa).

If Graf’s primary criticism of the Berlin School filmmakers is their faith in the power of the image over that of narrative and character, then Christoph Hochhäusler’s One Minute of Darkness serves as a surprising rejoinder, at once reasserting the trilogy’s genre play while experimenting with questions of subjectivity and objectivity. Hochhäusler argued in his correspondence with Graf and Petzold that the experience of looking in cinema, as in real life, results in a pure interaction with human ambiguity, allowing for a mode of observation that he asserts risks being “contaminated” by narrative. (Hochhäusler’s position recalls Wim Wenders’s similar skepticism about the “lie” of storytelling, which has hobbled that filmmaker’s work since the 1980s.) His episode weaves back and forth between observational character study, surreal schizoid fever-dream, and straight-up whodunit. Following the parallel paths of a wheezy police detective and an escaped sex-offender and convicted murder, the film creates mysteries even as it unravels them. Achieving a precarious balance between Petzold’s faith in the image and the cut and Graf’s in character and screenplay, Hochhäusler stages his own miniature conflict between the clarifying force of rationalist certainty and the menacing hallucinations of submerged trauma and the unknowable past.

It’s this question that Dreileben’s dialogical structure has been leading to all along: can representation reveal, and if so, how? Graf’s challenge to the aesthetic of the Berlin School filmmakers, which asserts a form of ostensibly hands-off analytical observation that’s attuned and resistant to the conventions and trappings of the commercial cinema, is a challenge to art cinema everywhere, which has resorted to a quasi-Bazinian realism, the default mode of international festival cinema. What Graf proposes—and Dreileben takes up—is that this form of realism can itself become a convention, a trap, and that one way of upending this is to hybridize and destabilize the knowing shorthand forms of genre cinema. Surely, this is not the only way of reinvigorating film style, but these films suggest the important role of dialogue in cinema—not simply within films, but also between films and within film cultures, both national and international.