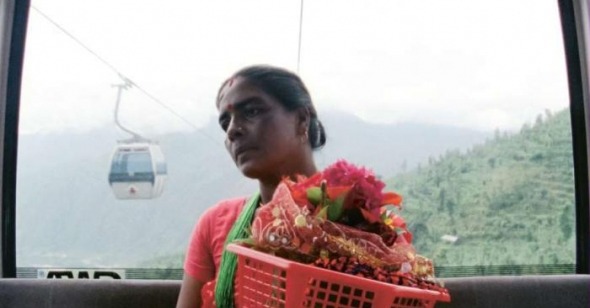 Suspended in Time
By Leo Goldsmith

What exactly are you doing when you’re watching a film?

With so much to look at these days, and so much vying for our attention, it's a question that comes up remarkably seldom. But then, attention itself comes so cheaply these days—or rather it comes cheaply for us, as we perform our unconscious affective slavery so that it can be mined, tracked, quantified, monetized, and catalogued for advertising ROI, incriminating metadata, pupil dilation. Watching things is no longer the pleasant, private activity that it used to be—if, in fact, it ever was—and its purpose still tends to elude us, however increasingly we seem to do it.

Produced under the aegis of Harvard University's Sensory Ethnography Lab, Stephanie Spray and Pacho Velez's film Manakamana seems to engage with something like a phenomenology of attention. Like so many of SEL's projects, this film is a kind of neostructuralist endeavor: eleven eleven-minute shots—roughly the length of a reel of film—taken from a fixed position inside of a cable car ascending (six times) and then descending (five times) a mountain in the Trisuli valleys of Nepal. The cable conveys passengers to Manakamana Temple, the sacred home of the Hindu Goddess Bhagwati, believed to grant wishes to pilgrims, usually in exchange for some kind of sacrifice—a chicken, a goat. The film follows many such pilgrims up the mountain, alone or in small groups: a solitary lady; an elderly trio; three young heavy-metal dudes (and their recalcitrant kitten); a pair of sarangi players; two ladies eating some precipitously melting ice cream. Some chat idly, comment on the scenery or the journey; others sit silently, like those in the first shot, an old man and a young boy, who fidgets a bit and makes furtive glances back at the camera.

The question that persists throughout is what it is we’re looking at, or meant to be. The scenic, green expanses of the landscape, partially visible through the frame of the cable car's window, are indeed beautiful, but the view is by no means singled out, despite how much the car's riders remark on them. And even though this film, more so than many SEL projects (like Véréna Paravel and Lucien Castaing-Taylor's Leviathan), is more properly a work of ethnography, we actually don't glean a great deal about the riders themselves, but for some brief snatches of dialogue. And that's when they say something—the feeling of watching those first couple of silent rides up the mount, especially in an audience full of the usual squirmy festivalgoers, is ever-so-slightly unnerving, as if one feels like one is missing something or expecting some dramatic interruption of the action. Soon, one starts to look out for small details: a bird flashes quickly past the window; the solitary lady, apparently having nudged one of the filmmakers with her foot, glances up and gives a barely perceptible smile of apology, and maybe a little embarrassment; goats bleet and jockey for space in their metal, open-air car, with no notion, one assumes, that they will be among those riders who will not make it off the mountain alive.

But soon, stranger, richer experiences unfold. Patterns of conversation emerge—comments about the landscape and the temple, remarks about ears popping from the altitude, and little suggestions of the history of the location. A couple who are shepherding a live rooster as an offering make some ambiguously melancholy aphorisms—“We've been through so much,” “It's hard going up; coming down is fast,”—and point out the old trail many feet below. This old trail, which at one time would have taken a pilgrim some three days to scale, has now been replaced by this eleven-minute cable-car ride—a marvel, to be sure, but also a startling collapse of time.

It's in this sense that Manakamana very subtly asserts itself as a film about time, and if not exactly its resistance to being captured, at least our complex relationship with how we experience it. One notes this in the sequence with the heavy-metal guys, who repeatedly talk about the trip in terms of other media: a music video they could shoot on the cable car, a painting one of them might like to have of the view, the half-dozen selfies they take with their digital cameras as they ride up. The kitten that joins them for the ride, mewling and becoming entangled in its owner's hair, has a different experience of this ride, of course, as do the goats. But this—along with the cinematic apparatus's process of capture and reanimation—helps us note a distinctly human experience of duration, to measure and comprehend it.

Spray and Velez's film calls attention to attention, the ways our thoughts and perceptions slowly drift and return during long durations spent looking at certain subjects or familiar scenarios. Variations are minor, but significant and precisely timed—in the number or demographic of the subjects portrayed, for example, or by following a couple of shots taken from one side of the car with one taken from the other. As the apparatus performs its measurement of time intensively, marking out twenty-fourths of a second, so Spray and Velez perform it extensively, attending to small oscillations and the rhythmic swaying of the car. This is aided tremendously by sound, mixed by SEL's resident audiosmith Ernst Karel, which carries us along with the drone of the cable (and occasional whirr of the camera), only to interrupt the flow with the low rumble of cable running over the pylons. At the heart of the film, between trips up and trips down, the film even structures in a little break for our visual attention in the form of a sonic interlude: an auditory tour of the temple over a black screen, a minor symphony of creaking doors, chiming bells, and animal cries. Here, in the middle of the film, the film enters a new sensory space, suggesting new attentions to attend to, and letting our eyes rest up for the journey back.