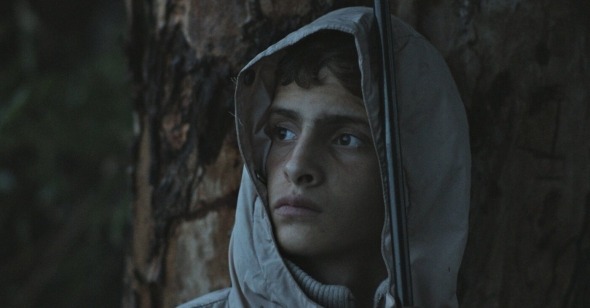 One immediate consequence of the 9/11 attacks was a kind of media intensification. Even after the traumatic images of the day itself, viewers in the West, and Americans especially, were inundated with footage of war in the Middle East—some far-off place marked only by sand, concrete, and devastation. News anchors were required to situate the viewer, given that these images lacked any meaningful signifiers. Prefaced by vague geographies and ideological motives, they were all ultimately the same: bombed-out buildings; burning oil fields; a brown, lifeless desert. They allowed the Middle East to exist on purely conceptual terms. This place—at once alien and all too familiar—was simply a hellscape, one in dire need of saving.

Notturno, the new documentary from Italian filmmaker Gianfranco Rosi, presents a Middle East equally void of context. Filming in various countries across the northern Levant, though never specifying which from scene to scene, Rosi chooses small, spare stories that are more concerned with affecting the viewer than informing them. The opening scene sets the tone: a group of mothers huddled together in an abandoned building all mourning the deaths of their sons. “Here you were tortured,” one woman cries out, placing her hand on a wall pockmarked by bullet holes. “I feel your presence. I feel you with me.”

That presence of death permeates the film: a boy hunting sparrow-sized birds to feed his family, a rooftop date set to the score of gunfire, a psychiatric hospital where patients perform political theater. Rosi presents the Middle East as a haunted place—and it has been this way, he posits, for quite some time. An opening title card states that, since the “fall of the Ottoman Empire” and the tectonic shake-up of World War I, a combination of tyranny, terrorism, and foreign invasions have “fed off each other in a vicious circle, to the detriment of the civilian population.”

Despite this appeal to history (and ignoring the egregious understatement of “detriment”), the evils at work in Notturno are explicitly contemporary. Though never seen firsthand, ISIS is gestured toward time and again as the cause for all this suffering—seen in children’s drawings and newsreel footage, heard in the testimonies of doctors and whispers of fearful victims. Given the central place ISIS occupies in the Western consciousness—carved out through propaganda videos of beheadings and other heinous acts—ISIS functions as a kind of explainer, a context clue that subsumes all others. They allow Rosi to eschew the complicated politics of the Middle East—the nuances of northern Iraq or the internal conflicts of Syria—and instead attempt something artful and poetic. The compositions are certainly pretty. Rosi’s wide images have a dioramic quality, isolating his subjects in the foreground with landscapes stretching out far behind them—a sense of infinitude that, paradoxically, feels more stultifying than freeing. The horizon, so far away, seems impassable. All this space only serves to imprison.

This procession of doom-ridden episodes slowly reveals that Rosi’s subject is not the Middle East so much as human misery. Mourning and trauma seem to serve as a kind of entertainment—maybe a useful way to potentially score a second Oscar nomination or Golden Bear. One episode makes this most clear: it follows a series of therapy sessions with children about ten years of age (one girl has Elsa from Frozen emblazoned on her jeans). They recount to a therapist—though more to the camera—the stories of their abduction, imprisonment, and torture at the hands of ISIS. They are also asked to draw pictures of the events—in order to generate some visual record for the camera to graze on—and dutifully produce crude images of stick figures missing limbs, with squiggles of red pen representing streams of blood. The children are then asked to explain their pictures, to narrate what they have drawn and relive their terrors for the sake of the camera (the therapist is now out of frame). For this task, Rosi selects a young boy with a stutter, clearly under immense stress, who struggles his way through the story of a young girl, his fellow captive, who attempted to kill herself by jumping from the top of a building but who ultimately failed and did not die upon landing.

A useful question here: Who is this for? Any Western audience is already deeply familiar with the violence ISIS has wrought in the Middle East, owed predominantly to the fact that ISIS were such keen image-makers themselves. Whereas Rosi’s previous film, Fire at Sea, was lauded for drawing attention to the lesser-known plight of migrants as they attempt to cross the Mediterranean into Europe, this footage, ostensibly trying to unveil or expose in much the same way, doesn’t warrant such invasive tactics. There is nothing to demystify here. The only possible purpose for such a scene, then, is to provoke, to make the audience feel. This secondhand torture therefore operates in service of the film, not its subjects—an important ethical distinction.

The gambit of the children’s drawings is also one Rosi has used before: El Sicario, Room 164 sees a cartel hit-man map out his history of “murder and torture” on pen and paper, a means of visualizing tragedy that shifts responsibility onto the viewer’s imagination. In the case of these children, however, not only has the burden of representation been reversed—from perpetrator to victim—but so too has the effect that their images produce. Rather than inciting the imagination, the children’s drawings recall real-world events deeply ingrained in our cultural memory: the hyper-stylized, hyper-violent videos distributed across social media by ISIS’s propaganda network. There, too, the purpose was to provoke, and they were equally successful in doing so. The West, its guilty conscience perhaps triggered by the Guantanamo-style orange jumpsuits the victims were made to wear, responded in full force: dropping the Mother of all Bombs, the most powerful non-nuclear weapon in America’s arsenal. Fulfilling that desire to “bomb the shit out of them” was one of Donald Trump’s foremost campaign promises—although the “them” in his statement was ambiguous. (Less ambiguous was his call for a “total Muslim ban.”) Rosi’s conflation of Middle Eastern politics—flattening Iraq, Kurdistan, Syria, and Lebanon, where he filmed, into a single entity—suffers from a similar ambiguity.

Not all the episodes in Notturno are so bound up in marketing misery to the West, some, like the story of a lonely duck hunter, are more concerned with mystery and a strange sense of peace. Nevertheless, there is one more example worth noting. The scene features a woman sitting alone in a dark room, her face illuminated by the light of a phone screen. We see that she is crying. (This is another of Rosi’s painterly moments.) She is listening to voice memos from her daughter, an ISIS captive, who first begs for money to buy her freedom and then later begs that their correspondence not be discovered, or else they will kill her. We have to assume, from the mother’s sorrow, that they did in fact kill her; we also have to assume that this is a regular ritual for the mother, and that Rosi just happened to stumble upon it. Indeed, Rosi’s observational mode only feels honest when unburdened by what Luis Ospina called the “inherent vampirism of cinema.” Where Notturno succeeds is in its quiet moments among nature, such as the scene where cars pass over a broken, flooded road. In the foreground, a waterfall cascades over the ruins. There is destruction but there is also beauty. Where Notturno fails is in aggressively conflating the two.