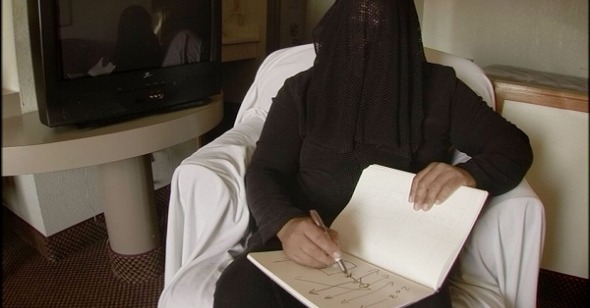 We first see the sicario (a special class of highly trained hitman) that is the sole subject of Gianfranco Rosi‚Äôs El Sicario, Room 164 as he stands staring in the mirror of the grungy titular hotel room, adjusting the layers of black mesh that disguise his face. Though his meaty fingers and hands‚Äîthe only bits of his body not cloaked in black‚Äîdrape the covering around his face with the daintiness of a lady about to head out the door to lunch, his voice is gruff and low as it discusses, in intimate detail, a torture he‚Äôd carried out in that room some years prior. Based on coproducer Chris Bowden‚Äôs Harper‚Äôs article ‚ÄúThe Sicario: A Ju√°rez Hit Man Speaks,‚Äù Rosi‚Äôs film is essentially this particular sicario‚Äôs autobiography via monologue, broken only by occasional fades to black and pillow shots of Ju√°rez (the border-bound murder haven obsessively documented and fictionalized in the enervating fourth section of Roberto Bola√±o‚Äôs opus 2666) and the nondescript motel in which the film was shot. It‚Äôs one of the simpler documentaries (if not exactly an elegant one‚Äîthe space and content grimly recall the confines of Fiona Apple‚Äôs ‚ÄúCriminal‚Äù video; the texture of the image isn‚Äôt far off either) to come down the pike in recent memory, recalling somewhat those individual portraits, like A Visitor from the Living and The Karski Report, which Claude Lanzmann splintered from his massive archive of Shoah footage.

Surprisingly, though the blacked-out human-shaped hole in nearly every frame of the film negates our gaze; though the film‚Äôs entire running time is comprised almost solely of his discussion of his firsthand involvement in a series of horrible acts; and though this discussion is confined to a single anonymous and wanly fluorescent room that, even cleaned, looks like a space created for the perpetration of violent acts, El Sicario feels neither oppressive nor claustrophobic. Rosi‚Äôs clearly spent some time pondering documentary strategies and avoids conventional solutions to let his film breathe. It‚Äôs now rote and expected for makers of nonfiction films to interrupt the perceived interminability of an image of one head talking by inserting illustrative b-roll, archival footage, or clever animations over their subjects‚Äô voices. But instead of cutting away, Rosi has the man hold a simple, benign pad of white paper and a Sharpie, used as tools to punctuate his tale. The camera pans downward as the sicario hastily scrawls important words and underlines them, or adds stick figures whose generic figurative quality only serves to make his dire tales even more distressing. In one sequence, the man live-animates a group of sicarios stalking their prey, blueprinting images of cars and houses and hit men, and then scribbling directional arrows to illustrate how they carried out their assault, lending his description suspense. With incredibly low-fi tools, Rosi has cleanly, unpretentiously bettered many of his contemporaries, and has had his subject do most of the work for him.

Most terrifying are Rosi‚Äôs several attempts at reconceiving that other standby of documentary practice: the re-creation. These sequences generally don‚Äôt work anywhere outside of an Errol Morris film (and even he seems to have realized he pushed the tactic to a conceptual breaking point in Standard Operating Procedure), yet plenty more prurient, less ingenious documentarians regularly try to prove their mettle by tackling narrativized elements. I‚Äôm sure many of these folks would have used the sicario‚Äôs tale as an opportunity to gleefully stage a series of gruesome, poorly lit reenactments shot on the cheap. Rosi instead lets his sicario lumber around room 164 at will, allowing his perambulations to spark memories. We watch as the hooded man, hands outstretched in the empty shower, mimes a water torture he carried out on a recalcitrant subject, and, later, those same hands carrying an invisible, remembered victim across the room and lying the imaginary form gently down on the bed. Though the sicario, clearly still prideful of his hard-earned skills, is quick to relate the many instances in which he wasn‚Äôt responsible for actually ending the lives of those whom he battered in that room, a chill lingers in these meditative recitations. Most viewers will never come this close to knowing death until they meet their own.

Rosi‚Äôs approach is stubbornly, appealingly straightforward. Fans of the gamesmanship in metacinematic heterodox filmmaking might lament the missed opportunity afforded by this scenario: we can‚Äôt see the sicario‚Äôs lips, so Rosi could have easily inserted almost any words that he liked. Who knows‚Äîmaybe he has. The man‚Äôs announcement towards the end of the film that, after an especially brutal slaying, he left the profession (there‚Äôs now a $250,000 price on his head), found God, and now resides quietly with his family far from Ju√°rez upends our expectations. There‚Äôs something a bit rehearsed in the way he breaks down in tears while relating his church epiphany, yet as we can‚Äôt see his face, he remains unknowable. Rosi, as he has through the entirety of the film, always invites us to take his subject for his word, no matter how terrible. El Sicario, Room 164 ends with a surprising nod to documentary convention: a pair of title cards quantifying the horror that is Ju√°rez. But, in their suggestion that the sicario‚Äîwho when employed as a murderer was always a means rather than an end in himself‚Äîhas again been put in service of broader purpose, there surfaces a taste of the Bola√±o-esque. A singular narrator, confident in the rightness and truth of his perspective has his own story gradually ripped out from under him, revealing the full tale is something else entirely. Rosi‚Äôs film is simple, yet perhaps less so than it first appears.