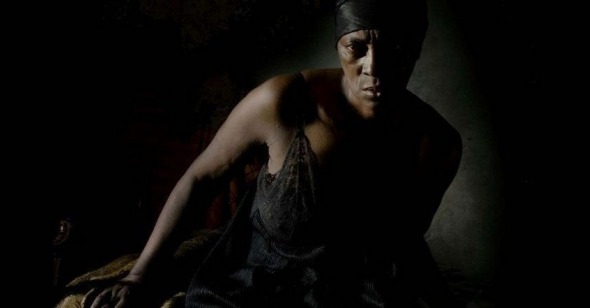 In Transit
By Daniel Witkin

Pedro Costa‚Äôs strange and elusive new film, Vitalina Varela, nevertheless delivers its exposition in a concise, even straightforward way. Having arrived in Lisbon on a jet whose engine noise intrudes violently into what has until then been a hushed, wordless soundtrack, Vitalina is first seen silhouetted in its doorway like one of the aliens in Close Encounters of the Third Kind. A stair car is then helpfully pulled up to the plane so that she can alight; and in a surreal touch water drips from her body, landing like teardrops on her bare feet. Our heroine is greeted by a group of sympathetic airport janitors, one of whom embraces her and tells us what we need to know: ‚ÄúYou arrived too late. Your husband was buried three days ago. Here in Portugal there is nothing for you. His house is not yours. Go home.‚Äù

As Anna Karenina waited 60 or so pages to show up in in the novel that bears her name, Vitalina is conspicuously missing from the roughly 10 minutes that essentially function as the film‚Äôs prologue. Until then, viewers are left to fend for themselves as Costa shows us some unexplained rituals: a funeral procession for an unknown man (Vitalina‚Äôs husband, we‚Äôll later deduce), and two men going through the ceremonial process of cleaning out the man‚Äôs house, removing, among other things, a gruesomely bloodstained mattress. We will discover that Joaquim, Vitalina‚Äôs late husband, left her behind when he emigrated from Cape Verde decades ago, abandoning her for good after a brief visit some years later without even bothering to return her letters. His betrayal lends a poignant obstinacy to her pilgrimage, and galls her all the more in light of the shabbiness of his quarters. In many ways, Vitalina Varela is a tale of two houses: Joaquim‚Äôs crumbling domicile in a Lisbon slum; and an idyllic home that the couple built by hand during his final visit, presumably in more innocent days.

Joaquim isn‚Äôt the only phantom acting upon the film as a structuring absence. Vitalina Varela is an immigrant song that strikes a decidedly plaintive note; and even as Vitalina stays fixed in Portugal, it‚Äôs clear that a part of her has stayed in Cape Verde. At times, the characters seem to regard their surroundings as little more than a holding area before they make their way to their next, and last, destination. The incomplete, almost provisional nature of their environs isn‚Äôt incidental. Costa‚Äôs mature style has developed through his complicated relationship with Fontainhas, a slum on the outskirts of Lisbon that was demolished in the course of the years that he was filming there. As idiosyncratic as they were, In Vanda‚Äôs Room (2000) and Colossal Youth (2006) could claim a certain empirical value as visual evidence of a particular time and place, though the films‚Äô documentary credentials and Costa‚Äôs relationship to his material has been hotly debated (he is decisively not a member of the community he has decided to film). Made after the neighborhood was torn down and replaced by high-rise projects, Vitalina Varela most resembles its predecessor, Horse Money (2014), which constructed a certain vision of Fontainhas in place of the neighborhood lost, and also happened to be the film in which Vitalina first appeared.

With their atmospheres of stygian gloom and shared stars‚ÄîVitalina takes her place with Costa‚Äôs muse Ventura, with whom she effectively swap leading and supporting roles between the two films‚Äîit‚Äôs tempting to view the two films as companion pieces. While Horse Money appears to take place in some murkily phantasmagorical nether region of the mind, Vitalina Varela is considerably more concrete. Ventura spends Horse Money progressing through a series of institutional non-spaces that chart the course of a journey inward, climaxing in a quietly harrowing t√™te-√°-t√™te with an embodiment of his demons in a hospital elevator. Vitalina, conversely, exists in a physical place that she is unable or unwilling to leave; though in her way, she‚Äôs no less trapped in her circumstances than Ventura was in his.

The feeling of material presence is not the work of narrative alone. One can‚Äôt discuss Costa for long without focusing on his use of photography‚Äîit seems that with every successive film he learns something new about how digital cameras absorb light that no one else has yet figured out. In Vanda‚Äôs Room and Colossal Youth exploited the busy-ness of consumer grade DV cameras to create an unusually lively image, something grainier‚Äîand hence by some standards more filmy‚Äîthan film itself (an impression further heightened by the fact that they were printed on 35mm film for exhibition). By Vitalina, the progress of such cameras makes for an image that at times feels uncannily well defined. The jet that Vitalina arrives on appears as an abstract tangle of metal, its cold contours precisely delineated by the camera. The characters‚Äô faces, too, at times seem to take on a kind of steely sheen. As with the clear, controlled brushstrokes of surrealist painters like de Chirico and Magritte, the crispness of the image gives an uncanny immediacy to Costa‚Äôs often radically strange compositions. Costa and DP Leonardo Sim√µes‚Äôs cinematography virtually begs comparison to painting, cataloguing some of the objects in its characters‚Äô homes in the manner of baroque still lives. A bottle of Zara perfume has doubtlessly never appeared so sumptuous onscreen.

A certain baroque sensibility also extends to Costa‚Äôs compositions. While his earlier work got him cast as a cinematic portraitist, albeit one given to cribbing some compositional strategies from Ford and Tourneur, he has recently emerged as an out-and-out expressionist. As intently as he films his subjects, they are increasingly subjugated to the overall design of his jagged and at times seemingly geometrically impossible frames. This makes sense in the context of the Fontainhas films he has produced in a post-Fontainhas world. Vitalina Varela was shot between actual locations and a makeshift set, allowing the director to venture further into outright artifice‚Äîat one point he sets Vitalina against a green screen that recalls the matte-painted landscapes of a bygone Hollywood. Yet the visual style of Vitalina Varela analogues to my knowledge lacks any identifiable analogues, with Costa‚Äôs digital camera producing blacks that Murnau and Tourneur could only dream of‚Äîdeep, opaque expanses that go beyond chiaroscuro, threatening to negate the landscape in real time.

So if Costa‚Äôs settings have become increasingly abstracted, what, if anything, is he documenting? The answer is contained in part by the name of the film, which appears twice onscreen: first as a title card and the second time as the top credit. In the absence of Fontainhas itself, Costa has found himself documenting its exiles, working in collaboration with his actors (in an interview with Cinema Scope, the director credited Varela with co-writing the script). Costa is usually discussed in terms of his use of non-actors, though here the term should be examined. For starters, both Vitalina and Ventura have appeared in his movies before; and Ventura in particular is, if nothing else, a veteran Costa performer, having worked consistently with the director for more than a decade. This time around, he‚Äôs cast as a disgraced priest wracked with guilt over a bus full of worshippers he sent elsewhere for baptism, only for them to die in a crash on the way (a plot point taken from an actual incident that both Vitalina and Ventura remembered from Cape Verde). While the involuntary quivering of his age-wracked body draws attention while he‚Äôs onscreen, what he‚Äôs doing is, for the most part, quite a lot like acting; if he‚Äôs still a non-professional, it‚Äôs worth asking what that means in this context and who at this point is more qualified to appear in a Costa. Vitalina and Ventura are quite visibly putting on performances, and they‚Äôre both showcasing a certain personal style‚ÄîVitalina with the androgynous radical chic of her black leather wardrobe and Ventura looking quite the hip priest, a rich purple stole draped over his suit.

An element of distance persists nonetheless, and it remains difficult‚Äîperhaps necessarily so‚Äîto tease out the relationship between Costa and his subjects. An anecdote proffered in the film‚Äôs press notes explains how star and director met: one morning Varela heard a knock on at her door, which she feared might be the police or immigration officials, but which instead revealed Costa (it would seem that these are the only outsiders who show any curiosity in these places: the cops and a single art house filmmaker). But if Vitalina was initially intimidated by Costa, some wariness does go both ways. In the Cinema Scope article, Costa admits to never ascertaining the reasons Vitalina remained in the country despite her husband‚Äôs death: ‚ÄúSo, why do you want to stay? I never asked her, because I‚Äôm afraid of the answer.‚Äù In the film, too, there‚Äôs a limit to how close Costa is willing to take us to these sorts of answers. For all that they evoke, the gnomic writing and eccentric, if often dazzling, visual style also function as barriers of a sort‚Äîthis is an actively anti-psychologizing type of cinema. The performers, too, seem to be keeping to themselves something that they are unwilling or unable to share. Even as we watch them, there‚Äôs a sense of privacy, an awareness of some aspect of experience to which audience and director alike have yet to earn access.

Even from a formal remove, there remains plenty to see. Godard once said that every film is a documentary of its actors, a claim that Costa seems to take quite literally. His films beseech us to look seriously at their subjects. And it‚Äôs something of an urgent business: Fontainhas may be gone, but those who made it are around, at least for now. We‚Äôd do well to look closely before they are made to undertake the final emigration, as must we all.