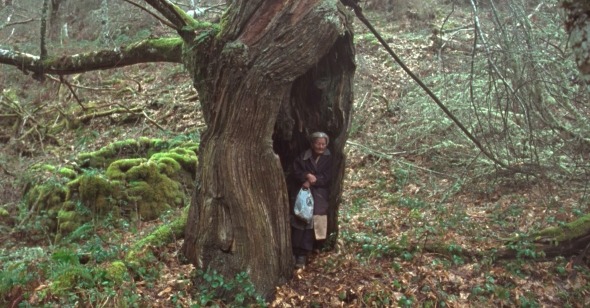 Into the Woods
by Jeff Reichert

Fire Will Come begins with images of trees at night outlined by an unearthly glow. It‚Äôs tranquil, but unnerving‚Äîwhat is the source of the light? Soon the trees begin to sway and then violently thrash against each other. Some are pulled to the ground, almost as if they‚Äôve been ripped from their roots by an unseen hand. The soundtrack is now filled with groaning and rumbling and crashing and Vivaldi. Deep bass booms suggest that what we‚Äôre witnessing might be the traces of an invisible giant out for an evening stroll. The film‚Äôs director, Galician filmmaker Oliver Laxe, milks the tension of not knowing what we‚Äôre seeing until he pulls back his camera. A-ha‚Äîthere are massive bulldozers rumbling through the forest, pushing the trees to the ground. The spectral white luminescence emerges from their headlights. The mystery of what we‚Äôve been watching is thus provided a terrestrial, comprehensible answer.

Yet if we know anything about Laxe‚Äôs cinema from his prior films, things are never as they seem, and magic freely commingles with the mundane. In his last feature, Mimosas, he intercut between two journeys: one set in the present day featuring an eager youth enlisted to drive a rich man into the desert via taxi, the other an archaic pilgrimage set in the days of Muhammad in which an elderly Sheikh makes a long, dangerous voyage home to die. Laxe conjures unexpected intersections, most memorably in the film‚Äôs time-collapsing final images, yet both tales are left wildly, fascinatingly open so that they can better vibrate against each other in suggestive ways. Fire Will Come, with its single location and small cast, is a more focused work, but maintains a similar sense of possibility as the earlier film, of things unknowable to the viewer. What‚Äôs really important may be happening somewhere outside of the frame.

After the nighttime assault on the forest, Laxe moves to a more mundane set of images: a man, Amador (Amador Arias), gets off of a bus in a small village, shoulders his backpack and trudges home through fields and forests. We learn that he is a convicted arsonist and has been in prison for some time, yet given the fashion in which his spry and sprightly elderly mother, Benedicta (Benedicta S√°nchez), greets him upon his return, he could be arriving back after a weekend away. Few words are exchanged between the pair, but they quickly resume what seems to be a long-familiar routine: cooking simple meals on a flat grill top, tending to the fields, and most importantly, taking their three cows out to pasture every day. Near Benedicta‚Äôs home, some workmen begin renovating a dilapidated structure with plans to make their fortune off the tourists who will one day flock there, an insertion of modernity in a film that often seems out of time.

During one of their bovine adventures, external concerns puncture this quiet mother-son idyll. A cow wanders into a small pond and injures its leg, necessitating a visit from a friendly veterinarian, Elena (Elena Mar Fern√°ndez), who seems about the same age as Amador. It‚Äôs clear that in her banter with him, she‚Äôs brought some spark to the taciturn man, though his aroused interest is never broadly played or overly telegraphed. As the two ride back to the farm with the injured cow, Amador, perched in the back of the pickup, long hair whipping in the wind, leans back in the sun and Laxe threads Leonard Cohen‚Äôs ‚ÄúSuzanne‚Äù onto the soundtrack. In a single take, the filmmaker lets the song swell and ebb. Is Amador feeling the burnished romanticism of Cohen‚Äôs song in the presence of a potential romantic interest? That‚Äôs perhaps too obvious a reading for a filmmaker like Laxe, but this pop interlude does clearly locate him alongside a newer generation of narratively aligned but experimentally minded filmmakers unafraid of their ‚Äúdifficult‚Äù movies actually providing traditional movie pleasures.

Elena visits the farm again and her easy rapport with Amador only grows. Meanwhile, the men building the Airbnb of their dreams nearby proposition Amador to come work on their crew. For a moment, it seems as thought the solitary man might join them, but he begs off, perhaps unready to fully rejoin society. Events take a darker turn in town one afternoon as Amador, settling in for a beer at a local pub, notices Elena eyeing him from across the room. There‚Äôs something in her glance that suggests things have changed between them, that her interest has curdled somewhat. When she finally crosses the room, he recognizes and she acknowledges that the difference in her demeanor stems from having learned of his past. An abrupt cut takes us to a shot of a steely, set-jawed Amador driving quickly back home. This edit is about as close as the film ever approaches to leading the viewer.

The film breaks here to join another narrative thread set in the same area. It‚Äôs evening and now we follow a group of firefighters as they battle a newly sprung conflagration and try to protect the village. For some time Laxe luxuriates in black and orange images, picking out the forms of men attempting to quell the blaze, tracking them as they advance and retreat. To date Laxe‚Äôs films have toed the line between fiction and nonfiction without pressing the attendant formal questions in an overt way, and in this section we feel the documentary roots of the images, yet we‚Äôre never removed entirely from the narrative push of the movie‚Äôs first section. As the fire rages, the workmen who live near Benedicta attempt to protect their investment, but the structure eventually burns to the ground. When morning comes, and the fire has been contained, the collapse will have predictable consequences for Amador, who arrives with the sun to take in the devastation.

Even though Amador‚Äôs crime hovers over Fire Will Come like a shroud, it is also never investigated, a happening that seems beyond the boundaries of a film interested in plumbing the tranquil movements of a rural place. Throughout, Laxe regularly cuts away to beautiful shots of the landscape, with its richly green fields that always seem to be viewed through a kind of humid fog. This, the first movie in the Galician language to premiere at Cannes, filmed in the village in which Laxe‚Äôs mother grew up, is one in which the images always seem wet from contact with the earth. The film comes from the land, in the fashion of a work like The Tree of Wooden Clogs. Is Amador truly an arsonist? The town believes so. But all the film provides as evidence is a scene in which he observes a formation of trees on the horizon with his mother and comments on the brutality of invading eucalyptus almost as if he were some kind of steward of the environment. Perhaps if he did commit arson it was to save the forest by destroying it? Is Laxe‚Äôs film, quietly, a fable of ecological destruction? Perhaps, but there is only one thing for certain here: the fire will come. It‚Äôs right there in the title. But what happens until it comes and after it has left is the material a mystical filmmaker like Laxe uses to stoke his viewers‚Äô imaginations.