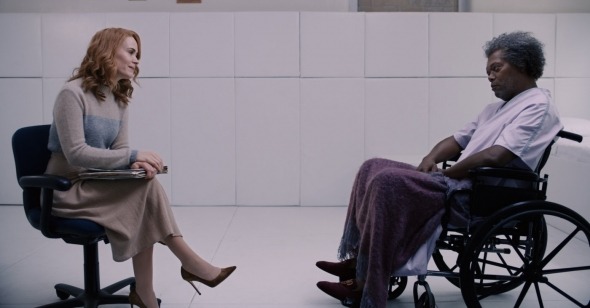 The official history of M. Night Shyamalan’s career reads something like this. While hitting the jackpot with 1999’s The Sixth Sense and proceeding to make whatever he willed for the next decade, Shyamalan continually proved himself a gifted director often sabotaged by his lackluster writing and penchant for self-aggrandizement. For me, a true believer, the most sound argument for Shyamalan’s body of work has little to do with his auteurist status—that is, the formal and thematic continuities that can be taken as de facto evidence of his mastery. The most persuasive counter-narrative to the above history would instead upend misconceptions about the individual films themselves, demonstrating their mastery over form, the value of their nondenominational spirituality, and their complicated philosophical frameworks. Glass, though bound to an auteurist constellation of forms and ideas, is to my mind his first film since The Last Airbender (2010) that fails under this scrutiny.

Since Airbender and After Earth (2013) failed by all measures of critical acclaim and box-office accounting, Shyamalan re-emerged with The Visit (2015) and Split (2016)—genre exercises that, in spite of their circumscribed limitations, showcase the formal virtuosity and idiosyncratic sentiment characteristic of their maker’s finest films. Crucial to the rebranding of this period is the replacement of collaborators like composer James Newton Howard or cinematographers Tak Fujimoto and Roger Deakins with new ones: producer Jason Blum, composer West Dylan Thordson, It Follows cinematographer Mike Gioulakis, and actors James McAvoy (X-Men: First Class) and Anya Taylor-Joy (The Witch)—all of whom provide variations on themes, forms, or archetypes germane to Shyamalan’s past films while allowing the director a veneer of reinvention. If Shyamalan regained some of his lost prestige by taming his less fashionable instincts in The Visit and Split, then Glass promptly squanders it. With its lugubrious plotting, protracted monologuing, unfashionable sense of humor, far-fetched twists, and insular mythology, this would-be comeback could easily be mistaken for willful self-sabotage. And I mean this to be at least partially flattering: Shyamalan, never one to sell out, has here cashed in on his recent successes, and fashioned a contemporary blockbuster after his own style and likeness.

Nineteen years since we left him in Unbreakable, David Dunn (Bruce Willis) now runs a security supply shop with his son, Joseph (Spencer Treat Clark), and moonlights as the ponchoed vigilante “The Overseer.” Having followed the news about local kidnappings, David sets out to patrol Philadelphia's industrial district, where he encounters Hedwig, the nine-year-old personality of Split’s Kevin Wendell Crumb, a man with DID (dissociative identity disorder) whose trauma has shaped him into a supremely powerful villain known as The Horde. Following a brief scuffle, The Horde and David are taken into police custody, and the film, having promised a superhero epic, begins anew but this time without the preceding excitement. The majority of the remaining run-time takes place within the panopticon-like Raven Hill Hospital, the institution for the criminally insane where Elijah Price (Samuel L. Jackson) was sent at the end of Unbreakable. Physical altercations at this point are traded in for an altogether different kind of warfare: the mind games waged by Dr. Ellie Staple (Sarah Paulson), the examiner put in charge of the three men’s case, who treats them as delusional mental patients, not humans endowed with exceptional abilities.

Glass turns the two decades since the release of Unbreakable into a structuring absence. This third installment in the “Eastrail 177 trilogy” (named after the train that derailed in Unbreakable, killing everyone on board except for David) makes ample room in its 129-minute running time for cameos, callbacks, and visual rhymes that provisionally bind the universes of these otherwise stand-alone films together. Shyamalan reprises his cameos from Unbreakable and Split (in the former as a drug dealer, and in the latter a building manager), telling David, without as much as a wink, that he’s since turned his life around through “positive thinking.” This sequence, and others like it, draw attention to the ad hoc—and thus self-reflexive—construction of this series: production time has become synonymous with narrative time, and the film’s lost years are also those of its director’s.

Since the release of Unbreakable in 2000, comic book media have proliferated in popular culture, on television, and in mainstream cinema. While Elijah was required to explain to David (and by extension, the audience) the mechanics of comic stylings and structure in Unbreakable, his frequent interjections in Glass are essentially superfluous; most audiences will already possess the knowledge required to understand how the film repurposes the genre’s trappings. On a fundamental level, this context limits how Glass operates. Where Unbreakable used deep-space staging, frames within frames, and thematic associations of color to imagine what a modern comic book superhero movie might look like, Glass postures a critique of the studio product that has typified the form in the time since that earlier film’s release.

Nowhere is this more evident than in the film’s three action set-pieces. When The Horde and David face off in a dimly lit, cavernous building, their movements are coherently tracked, their respective blows filmed in close-up to emphasize the physicality of each movement, and their encounter, while not particularly spectacular in comparison to similar scenarios in films of this type, is treated as an intimate, tactile affair; well aware of how superhero movies have been criticized for their weightless action, Shyamalan composes his shots in direct proximity to actors faces or around the source of movement, like two arms clenched around a chest, preparing to lift and drop an opponent. The second set-piece follows Mr. Glass and The Horde as they sneak out of the hospital through a basement corridor; the camera remains in medium close-up on Glass’s curious reaction while The Horde defaces his enemies in the blurry background (video essayists will surely take note of how this values “character over action”). And then there’s the grand finale, foreshadowed to take place at the Osaka Tower (“a true marvel”), yet staged instead in Raven Hill’s parking lot—like a CGI blockbuster, but without the necessary compositing.

By primarily defining Glass in formal, thematic, and ethical opposition to the adaptations he believes have been widely mistaken for the pinnacle of comic book form, Shyamalan here is unable to loosely interpret and interpolate the genre as he did in Unbreakable. The corrupting effects of superhero ubiquity are explicitly illustrated by the opening scene, in which two punks “super-man punch” an innocent bystander, record the attack, and then circulate the images online where others will watch and replicate them. His aesthetic motivated by these self-imposed moral aims, Shyamalan fixes his camera on innocent bystanders during the film’s finale, composes most of the film in close-ups, and integrates a host of returning cast members including Elijah’s mother, David’s son Joseph, and Casey from Split, whose presences suggest the illusion of a much larger film than this one can reasonably withstand. Without engaging viewers in good faith, all of these things can be said to “frustrate” audience expectations—that is, assuming you’re willing to accept being indignantly boring as a form of argument.

Glass and Lady in the Water (2006) are perhaps the only Shyamalan films to outright accept how their characters interpret, frame, and engage with reality. By performing close readings of cereal boxes, crossword puzzles, and an ancient Chinese folk tale, the apartment community in Lady deliver Bryce Dallas Howard’s nymph away from ravenous werewolves back to the world from which she came. If they are to be successful, the artists, stoners, and layabouts in the complex must all take their place within the narrative’s divine architecture: the filmmaker discovers he’s a prophet, misunderstood in his time and rectified after his death, and Bob Balaban’s critic, a symbol for unbelief, is literally fed to the dogs. In Glass, Dr. Staple is designed to plant doubt in characters and audience alike, but her hypothesis is never seriously entertained. Her mannered tone, her use of quasi-scientific language (everything can be explained by injuries to the “frontal lobe”), and her nefarious demeanor (which includes her use of the word “nefarious”), all point to questionable intent. She exists only to affirm the film’s values; her doubt is rarely believed.

Now compare this with 2002’s Signs, among his most moving, ambiguous, and downright terrifying films. Watching a live broadcast of a forthcoming alien invasion, Mel Gibson’s Graham Hess (who lost his faith after his wife died) explains to his family that there are two ways to interpret these images: as evidence that there is someone out there watching over us; or as coincidence, a string of unrelated events that are given meaning by human subjectivity. Although the family is eventually saved by a boy’s asthma, a girl’s aversion to tap water, and the dying words of Graham’s wife (“Swing away!”), these signs of providence are ultimately left for the viewer to interpret. Yes, Signs is a story about a former reverend regaining his faith; yet, depending on one’s perspective, it could also be a horror movie about the very possibility of God existing.

Unbreakable, The Village (2004), and The Happening (2008) follow similar patterns. They establish two possible explanations, one natural the other supernatural (David is or isn’t a superhero; the village is or isn’t guarded by fantastical beasts; there is or isn’t a logical reason for the outbreak), and proceed to question the limits of those explanations. At the end of Unbreakable, when David becomes aware of his abilities, it remains unclear whether or not Elijah’s theory (that if David is a hero, then he has no choice—he must be the villain), framed entirely by comic book ideology, is true. In The Village, which inverts the metaphysical explanations of Unbreakable and Signs, we come to learn that “Those We Don’t Speak Of,” the supernatural entities in the forest, are the creations of the village’s elders, who, profoundly hurt by the modern world, have established a 19th-century protestant-settler haven in the woods. And yet, is the world of The Village not ghastly, even after you know the elders are the ones wearing the masks? Is it not true, as William Hurt’s patriarch so adamantly declares, that the world indeed “moves for love”?

Glass allows for one reading only. Eliminating the ambiguity of Unbreakable, Shyamalan reveals that Kevin’s father was on the same train as David, thus enabling the boy’s mother to abuse him until he transformed into The Horde; that Dr. Staple, far from a skeptic, is part of an ancient, underground, totalitarian group that has prevented the emergence of exceptional beings through mind control or force; and that the many cameras around Raven Hill Hospital have been pre-programmed by Elijah to send the footage of the film’s climax to an off-site server where they can be compiled and eventually distributed to the masses as evidence for the existence of superhuman beings. His master plan coming to fruition, the vindicated Mr. Glass considers his work with his dying breaths. “19 years!” This is Shyamalan’s alternate history. Believe if you must, but take the leap of faith at your own peril.