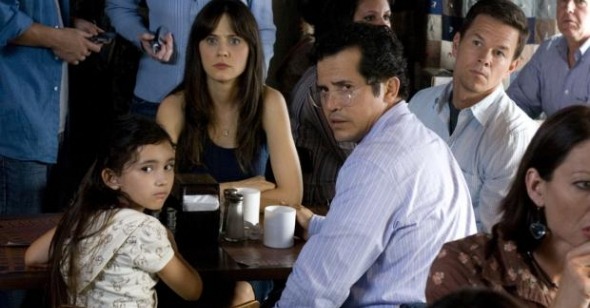 What Just Happened?
By Michael Koresky

Each of M. Night Shyamalan‚Äôs studio films thus far have employed, or even exploited, genre scenarios to similar ends‚Äîto question the unknown, to collapse boundaries between well-trod fantasy tropes and untranslatable spirituality, and ultimately, to preach the importance of human connection in the face of trauma or even tragedy. The Sixth Sense, Unbreakable, and Signs seemed less interested, respectively, in ghosts, superheroes, and aliens, than in the intuitive human healing that their presence brought about. It‚Äôs precariously new age, and it‚Äôs certainly no surprise to hear him in interviews talk of his target audience as ‚Äúthe collective soul.‚Äù If The Village easily remains his greatest film thus far (and possibly the most accomplished, coherent social allegory to come out of Hollywood in this politically catastrophic decade), it‚Äôs in part because in it he purposefully bumped up against the limits of all these things: the unknown was revealed as hokum (or as William Hurt‚Äôs elder called it, ‚Äúfarce‚Äù), belief was betrayed, egalitarianism turned to rancid, nearly fascistic self-preservation. Yet despite The Village‚Äôs political and social cynicism, Shyamalan managed to offer a portrait of blossoming love so genuinely touching, so well performed (by Bryce Dallas Howard and Joaquin Phoenix), and given such generous narrative weight, equal to its explicitly sham horror thread, that the film left in the dust the self-help guru trappings that so many people see in his oeuvre. The Village proved that Shyamalan doesn‚Äôt mean to just work big-L love (between estranged couples, tentative lovers, family members) in as a plot expedient but as a unifying plasma, and that he‚Äôs uninterested in utilizing sci-fi and fantasy detritus without it as an adhesive.

But if Signs, with its religious coddling, and Lady in the Water, with its frazzled, bogus attempts at community building and self-reflexive storytelling, showed the biggest chinks in Shyamalan‚Äôs armor so far, exposing as they did the director‚Äôs penchant for easy narrative wrap-ups and a distressing spiritual determinism, then his latest film, the already reviled The Happening, rightfully holds the director up to the harshest scrutiny yet. In this case, Shyamalan posits love as the human race‚Äôs savior against a sudden deadly attack from unseen forces, which we‚Äôve been led to believe is the result of the release of neurotoxins from plant life all over the Northeast. Revealing this can hardly be considered spoiling, as this time Shyamalan, who normally structures his films around the big reveal, chooses to pose possible explanations for The Happening‚Äôs threat against humanity within the first half-hour and seemingly every five minutes thereafter. Originally titled ‚ÄúThe Green Effect,‚Äù the film is a surprisingly unimaginative entry in the eco-horror genre, hardly a nascent form when one considers the amount of tsk-tsk terror caused by various pollutants in film history, from Frankenheimer‚Äôs Prophecy to last year‚Äôs terrific movie The Host to, well, Godzilla. Yet unlike those films, the horror of The Happening does not manifest as a literal monster, but rather as a sort of vague unease, whispering through tree branches and tall grasses; to properly measure Shyamalan‚Äôs failure in translating these generalities to palpable fear, Larry Fessenden‚Äôs barely seen 2007 release The Last Winter might prove a worthwhile counterpoint. In Fessenden‚Äôs film, a group of Alaskan oil drillers is menaced by unseen forces, which, until a rather misguided, literalizing climax, are represented by nothing more than swooping camera movements and whistling winds, and it‚Äôs effective, elemental filmmaking‚Äîin other words, this isn‚Äôt inherently stupid material. Shyamalan‚Äôs failings here aren‚Äôt in his concept but in his execution; it‚Äôs not necessarily laughable stuff, but Shyamalan is on such unsure footing in how to present such indeterminate information to the audience with a straight face that he falls back on hoary horror imagery and pathetic stabs at deflating humor. The Happening may be as earnest as his earlier films, but it‚Äôs the first one that feels borderline disinterested.

Perhaps it‚Äôs because he has little interest in, or isn‚Äôt skilled at, purposefully conveying large-scale disasters. With his intimate approach to camera, keeping it close to his actors, often framed within intricate long takes, and his manner of winnowing genre narratives down to just a few isolated characters, Shyamalan has an eye for the small; he‚Äôs a minimalist caught in a maximalist idiom. Even in ideological failures like Signs and Lady in the Water, it‚Äôs been his saving grace; without Signs‚Äô detailed focus on one quarantined family‚Äôs response to a potentially cataclysmic alien invasion, its goofy plot mechanics would have been even more glaring, its proselytizing unbearable. In The Happening, his attempts to put personal and social crises on equal footing backfire tremendously. In the face of the barely threatening, often invoked ‚Äúforces at work beyond our understanding,‚Äù Shyamalan obviously believes he needs a strong central couple for viewers to identify with, yet here he relies too much on his actors‚Äô likeability to carry the film, casting appealing but clearly limited Mark Wahlberg and Zooey Deschanel. As high school science teacher Elliot Moore, Wahlberg delivers his lines in that beseeching, earnest blankness that worked well for both his na√Øve innocent in Boogie Nights and his blossoming activist in I Heart Huckabees, but which only really works here in his early scenes as a pedant to a classroom full of apathetic teenagers (he‚Äôs also good in The Departed, mostly because the whole role consists of talking down to people); when thrust into later scenes of intended nerve-wracking suspense, his flared nostril, wide-eyed routine makes earnestness seem dishonest, not to mention stagy and frankly whiny. Deschanel fares even worse as Elliot‚Äôs wife, Alma: given an impossible role to play‚Äîa tight-lipped, porcelain ninny whose disinterest in children Shyamalan uses as a character flaw that must be eradicated‚Äîshe‚Äôs completely lost, reduced to a series of inexplicable, flighty mannerisms. As feeble as Wahlberg and Deschanel are, Shyamalan still puts their marriage front and center, even amidst the outrageously gory deaths happening all around them, positing Alma‚Äôs possible infidelity as a narrative thread of equal fascination to plant-induced mass suicides. Well, it isn‚Äôt, and when their trip to safer ground is interrupted so that Deschanel can plead to a mystery man, via cell phone, dialogue like, ‚ÄúWe ate tiramisu together . . . that is it!‚Äù, the film devolves into wildly misguided, nearly hilarious incongruousness.

This atonality extends from much of Shyamalan‚Äôs dialogue to his general filmmaking, which this time around seems alternately sloppy and dispassionately workmanlike where it was once inventive and visually economical. Even in a hopelessly blinkered near-disaster like Lady in the Water, Shyamalan offered a daringly foregrounded technique, which at least took his vision, however regressive, to its logical end and invested his didactic, meta storytelling conceit with genuine moment-to-moment wonder. Yet here he forgoes his carefully assembled single takes, claustrophobic point of view shots, and his expert use of foreground (the body on the gurney heaving into blood in Unbreakable, with Bruce Willis, incredulous at his train-crash survival in the background; Bryce Dallas Howard‚Äôs radiant extended hand in The Village, with a monstrous red terror lurking in a dim, distant light), and settles for dull shot-reverse shots and a lot of nonsensical, overdetermined, often madcap blocking. Even when he tries to break out of this dull routine‚Äîa scene during a Philadelphia traffic jam in which the camera follows a loaded gun as it‚Äôs passed from hand to hand in a chain reaction of suicide‚Äîit comes across as surprisingly amateur, look-at-me grandstanding.

The lack of technical finesse and storytelling lyricism in The Happening is so consistent throughout that when it takes its somewhat desperate left turn in its final chapter to spooky theatricality (courtesy of Cats‚Äô Miss ‚ÄúMemory‚Äù herself, Betty Buckley, whose out-of-nowhere turn as a crazy backwoods doll-making hermit is nevertheless the most fully inhabited role in the film), the change of terrain is nevertheless refreshing. To defend the film as Shyamalan‚Äôs stab at no-nonsense B-filmmaking doesn‚Äôt hold water when one remembers the far nervier, more viscerally affecting films that similarly deal with people driven to horrific acts from unseen forces in urban areas (Larry Cohen‚Äôs God Told Me To; the first section of this year‚Äôs The Signal), not to mention the self-anointed auteur‚Äôs penchant for turning his narratives into instruction manuals for how to live, whether in opening yourself up (‚ÄúI don‚Äôt like to show my emotions either,‚Äù Alma confesses to a taciturn little girl in a bit of expository nonsense) or in going green (power plant smokestacks dominate a small house in a particularly pointed shot). As a viewer, it feels disingenuous to be harangued as having no regard for living things when at any given moment our dear instructor will gladly show us a man willingly getting his limbs ripped off by a lion (shown on a video phone in a pale imitation of Signs‚Äô equally silly alien-at-the-birthday footage) or another laying down complacently as an enormous lawn-mowing tractor turns him into bloody mulch.

Though the gleeful bashing of the filmmaker that‚Äôs overtaken criticism of The Happening might be earned this time around (and to be fair was nearly encouraged by his previous film‚Äôs smug decision to make mincemeat of Bob Balaban‚Äôs insufferable film critic), it‚Äôs been dispiriting to see Shyamalan‚Äôs past handiwork ignored, which makes this film all the more disappointing. The company line seems to be that he‚Äôs getting worse and worse, although it‚Äôs hardly a coincidence that that declared decline in quality matches up rather nicely with box-office receipts; instead, his career, like any other filmmaker‚Äôs, has been one of ups and downs, even if The Happening might show something of a toll all the criticism and outsized expectations has taken on him, in its weird mix of audience pandering and refusal to play by the rules. In the end, it‚Äôs a Shyamalan film, for better or worse, and of course it all comes back to the regenerative power of love‚Äîyet here Shyamalan uses it as a rather opportunistic means to an end, both to expedite a conclusion and to force resolution on otherwise ponderous, negligible characters. If any of this works, even in momentary bursts, it‚Äôs because James Newton Howard, the director‚Äôs go-to guy for injecting spiritual heft, is doing all the heavy lifting; his score, with its staccatos of piano and violin, climactically fills in the clear gaps left onscreen by Shyamalan, Wahlberg, and Deschanel. An even more glaringly auteurist touch comes at the end, when the declaration ‚ÄúA Film by M. Night Shyamalan‚Äù pompously, presumptuously fades in after the screen goes dark; a less conspicuous batch of rolling credits might have been wiser in this case.