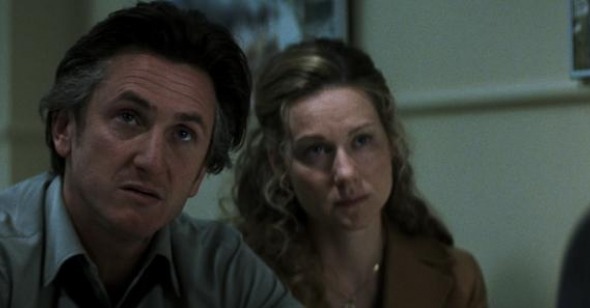 Mystic River’s detractors, who make up in vehemance what they lack in number, aren’t alone in noticing that Clint Eastwood’s latest is a movie hobbled by too many needless, nettling imperfections. Who would seriously argue otherwise? I’d start by citing its irritating penchant for severely high-lit religious iconography, the feeling of truncation in the crucial opening childhood scenes, and some fumbled, questionable narrative twists. But these complaints aside (and I could go on) I still found more of the stuff that really draws me to movies in Mystic River than in almost anything else released in 2003. In short: it’s got a compulsively absorbing narrative which moves beautifully, fluid, functional, unpretentious visuals, and, most of all, a steady, sometimes smothering sense of empathy, which put me in mind of another American filmmaker with a vested interest in masculinity who never made a perfect movie, and was not a bit less great for it, Nicholas Ray. Critics of Mystic River’s Irish-American ghetto-tragedy have found something overbearing in the intent, close-up attention that Eastwood affords his cast, imagining it as the sweaty heave-hos of inducing labor to the birth of a Work of Art. To my eyes that sustained intimacy is nothing so cynical as fishing for Oscar clips, but manifests a genuine desire to discover through proximity an affection and attention that keeps the camera leaning close in real hopes of learning something.

It’s that openness to self-education that’s made Clint Eastwood so likable, if not consistently successful, a filmmaker for me. And it’s because he learned so well during his pairing with Don Siegel that Eastwood’s inherited the tag of the “last classicist,” which he’s worn at least since the revelation of Unforgiven. Of course it refers to his taciturn, vocational commitment to the basic rules of storytelling craft, but it also implies kinship to a pantheon of dusty film textbook names that are easier to respect, as one respects a distant, dessicated grandfather who liberated something-or-another, than to love. And Mystic River, with all its close steady compassion, is something one loves.

The film is an elementally emotional work, flooded everywhere by a deep, regretful sort of fatalism. Three times Mystic River returns to a digression between scenes that’s key; Eastwood cuts away to segments of the same shot (which appears, entire, in the movie’s trailer), soaring low over black water, gliding inexorably toward a dockside bar. It’s the scene of the film’s penultimate sin that we’re moving toward, a dive joint whose name, The Black Emerald, hums with Hibornean despair, and the foreboding approaching shots are our clairvoyant flashes of inevitable tragedy. Bookending that final transgression is the abduction and violation which prefaces Mystic River the source from which everything to come flows. Sheer hurt travels between these two points, carried along in a blood curse (“It’s like vampires,” as Tim Robbins explains) which the tightly-knit stasis of the working-class neighborhood provides the optimal environment in which to fester and thrive. There’s a stark eye-for-an-eye logic to the way violence is systematically transmitted and repaid in Mystic River, hopscotching from victim to victim, sometimes lying long-dormant, but always collecting on debts of transgression. “I know in my soul I contributed to your death,” says grief-wracked Sean Penn earlier, as if with the impossible premonition that his daughter’s killer is the son of the man he murdered; it seems these characters are possessed, on some very basic level, with a troubling comprehension of the sum total of their sins and of the attrition owed for them. That inescapable, inborn knowledge of things to come is described best in a passage from Dennis Lehane’s source novel, to which, scene after scene and dialogue after dialogue, Brian Helgeland’s script keeps close: “You felt it in your soul, no place else. You felt the truth there sometimes—beyond logic—and you were usually right if it was a type of truth that was the exact kind you didn’t want to face, weren’t sure you could... hard ugly truths your soul recognized long before your mind caught up.” Worst-case scenarios, then, are as good as realized; as to if this is a matter of real divine retribution, self-fulfilling Catholic guilt, or something in-between remains a point of ambiguity.

What gives Eastwood's film its particular resonance, though, is the way Mystic River fits its monolithic, Sophocles-sized sense of tragedy into the small scale of the residents of detail-perfect Buckingham Flats, Mystic’s fictional blue-collar Boston neighborhood. The film’s full of tactile performances as well-worn and lived-in as the triple-decker houses; Tim Robbins transforms into something long and lax, his walking wounded Dave Boyle is not broken so much as eroded, with a gray half-ghost complexion and pouchy pale jowls that retain something of the little boy lost in them. And as Celeste Boyle, Marcia Gay Harden plays knockout scenes with Penn, full of tight-lipped longing for the hard, decisive man who is everything her husband isn’t, and she loads a few key glances with at least a decade’s worth of longing. It’s honest, really recognizable stuff, and the result of bringing the kitchen sink quotidian into contact with the epochal, of elevating Penn’s reformed thug into a Celtic “king” and Robbins’ into a sad-eyed martyr, is something like the use of Bach to soundtrack the sordid world of Pasolini’s Accatone: very strange and very, very moving.

The fatalism of Mystic River, in which onetime working-class kid Eastwood looks back in horrified sympathy on the cannibalistic low-income milieu of his youth, puts 73-year old Clint in good company; one would be hard-pressed to cite many artists, cinematic or otherwise, who’ve gotten more optimistic with the passage of time. His film’s recurrent ellipsis, shot in the God’s-eye-view of Steadicam floating over the Flats, could almost invite comparison to the pessimistic, half-blind fogey Kurosawa (spiritual Godfather to the “man with no name”) who directed Ran. But while Kurosawa coldly watched his color-coded tin samurai wage apocalypse through the distant pov of a weeping Buddha, Eastwood pushes in tight, leaves no breathing room of disassociation to squirm away from the sense of sadness and waste. Maybe it’s nearer the truth to say that encroaching old age has drawn Eastwood to the cynicism, if not the style, of his first mentor, Sergio Leone, indicated by an exhumed Eli Wallach appearing in the bit part of Mystic River’s liquor store proprietor? Eastwood’s latest has at least a kinship to the Maestro’s own late-period piece, the self-deconstructing gangster opera Once Upon a Time in America (for which Clint turned down a role), which also bleeds together past and present among a pack of hoods in an ethnic enclave, here Jewish Williamsburg. And certainly when Robert De Niro’s elderly Noodles posits “You can always tell the winners at the starting gate. You can always tell the winners—and you can tell the losers,” he could be delivering a survival-of-the-fittest postscript for Mystic River.