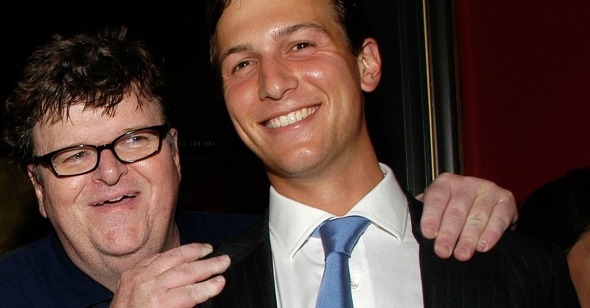 An extended early portion of Michael Moore’s latest feature documentary is devoted to ass-covering—the filmmaker suffocates potential criticisms and charges of hypocrisy in the crib before the haters have a chance to voice them. Before laying into Donald J. Trump, Moore sheepishly boasts shots of himself buddying up with various administration ghouls like Jared Kushner and Kellyanne Conway, with whom he eagerly took a selfie downstairs at Trump Tower circa 2016. There is a brief video of a bizarrely pleasant televised 1998 brunch with Moore, Trump, and Roseanne Barr (why?), in which Moore ends up obeying handlers’ instructions not to ruffle feathers. In an audio clip, Kushner, who always fancied himself a media-savvy player, expresses his admiration for Moore, a sentiment echoed by White House Chief Strategist turned freelance Trump cheerleader Steve Bannon, who clarifies in a separate video interview that he only admires Moore “as a filmmaker.” This last admission is telling. “I don’t know what to make of that,” says the ever-folksy Moore (whose narration has gotten more maddeningly halting and naptime-soft with each film), adding that Bannon, in his previous life as a producer, had credits on Moore projects.

What he should make of it is that Sloppy Steve (who has said that he partially modeled his dishevelment on Moore’s), in his capacity as a director of godawful propaganda “documentaries” like Fire from the Heartland and Occupy Unmasked and deceitful, incendiary “journalism” via Breitbart and beyond, is an apt pupil and kindred spirit. By any sane, pro-humanity measure, Moore’s filmmaking and politics are both objectively “better.” Yet, probably more than any one figure, Moore authored Bannon’s filmmaking playbook, in which political theses are rammed through using facile juxtapositions, deceptive timelines, and highly selective archival footage accompanied by manipulative music. So Bannon’s declaration of admiration might have been an occasion for Moore to reexamine his own role in weaponizing cinema and contributing to the fully divided state of the discourse, in which Fox News grandpas, Facebook aunts, and the urban commentariat alike seek only reinforcement of their held political bent. If only he’d known what to make of it.

Instead, Fahrenheit 11/9 delivers everything you’ve come to expect from a Moore doc, so much so that it plays like a This Is Your Life-esque career recap of his greatest hits, sprinkled with new heroes, villains, random aged inserts of wholesome 1950s Americana or crumbling infrastructure, and freshly updated ironic soundtrack cues. The title refers to the day when Trump was officially recognized as the winner of the 2016 presidential election, and also, of course, to 2004’s Fahrenheit 9/11, Moore’s scabrous attack on George W. Bush, which doubled as a (failed) attempt to sway that year’s election and remains the highest grossing documentary of all time. There are few films more “of their moment,” and it’s hard to understate how important and exciting it felt in October 2004 to crowd into a theater on the eve of an important election, during wartime, to see what damning treasures Moore had uncovered. It was not made for posterity, and hasn’t aged well by design—the drawn-out lingering on the Bush and Bin Laden family connections and groaner “Shiny Happy People” montage lack any nonhistorical interest, though the war atrocity footage retains its jarring power. Fahrenheit 9/11 now seems to subscribe to the “Bush Did 9/11” theory that has become a mocked social media meme. Moore reuses the older film’s effective introduction in 11/9, asking “Was it all just a dream?” and positing a world in which Hillary Clinton—like Al Gore in 2000, the winner of the popular vote—won in 2016. We see tearful women planting “I Voted” stickers on Susan B. Anthony’s headstone, campaign teams celebrating to Rachel Platten’s “Fight Song,” and glum Fox News anchors all but calling it for Clinton, before results in states like Ohio and Florida start turning the Electoral College tide. It crescendos with footage of Trump’s grimacing orange face projected onto the Empire State Building and Moore asking, “How the fuck did this happen?”

At this point, you might expect Moore to transition into a diagnosis of how Trump won, or skip ahead to eviscerating/destroying the dangerous and absurd man in office, thus offering his mostly liberal audience the fleeting, semi-masochistic thrill of reliving traumatic recent history. This is supposed to be his anti-DJT screed, its poster featuring a plump Trump mid-golf swing, in front of an exploding White House next to the tagline “Tyrant. Liar. Racist. A Hole in One.” Moore does cheekily offer one explanation for the shock victory: Gwen Stefani. It’s a laugh line, but the reasoning is that Trump was so stung when he learned Stefani was paid more by NBC on The Voice than he was on The Apprentice that he vowed to show the network his true value with a purely token but very visible run for office that would vastly increase his cachet. It seems a stretch until you remember how pathologically obsessed Trump is with television ratings, often tweeting at 6 a.m. about the topic. But after this Stefani bit, Moore swiftly plants himself back in Flint, Michigan, his hometown and the most consistent subject and setting in his work. Investigating the Flint water crisis, in which the city’s largely poor citizenry were and still are being poisoned by lead-infected water caused by profit-driven changes in the water sourcing, Moore credibly identifies Michigan Governor Rick Snyder as the root cause. Although Moore suggests Snyder served as a “coming attraction” for Trump, it soon becomes clear that Flint, and, later, acts of dissent like the teacher’s strikes in West Virginia and the Parkland students’ activism, are the film’s real subjects. Earlier in the film, Moore had castigated the media for their omnipresent pre-election coverage of the “cash cow” Trump (there’s a particularly gross clip of felled CBS mogul-creep Les Moonves gushing about how good Trump is for business). Now Moore has smuggled a doc about Flint and his own perennial concerns under the guise of an outrageous exposé of Trump, the filmmaker’s salable Trojan cash cow of choice.

Trump is but a supporting a player. Introducing the film at its Lincoln Center premiere, a downcast Moore repeated the misleading line that the film was his attempt to understand how an “idiot” beat “the smartest person to ever run for President.” But centrist viewers still in the Clinton tank hoping for a compilation of the “Cheeto Cheater”’s most shameful lows will have their joy dashed. In the ramshackle, awkwardly unfunny filmed stage show Michael Moore in TrumpLand (2016), Moore preached for Hillary out of exigency (as with Fahrenheit 9/11, his efforts failed to sway the election, except maybe in the unintended direction), but his populist, Bernie Sanders-supporting bona fides return in 11/9, which documents how the DNC lied and suppressed votes to nominate HRC. For most of the film’s two hours, though, Moore is scattered across the States, or has unearthed enlightening YouTube ephemera therefrom. He patiently describes how Snyder enacted an Emergency Management Procedure in 2011 that allowed him to flush local leaders and replace them with all-powerful, unelected managers friendlier to corporate interests, a swindle that led to the water crisis. This leads to two of Moore’s patented stunts, obligatory ever since his burr-in-the-saddle Roger & Me and TV Nation days. In one, he waddles up to the capitol building in Lansing, handcuffs dangling, to make a citizen’s arrest of Snyder, as usual making life worse only for put-upon working-stiff security guards. Later, he drives up to the governor’s residence (its modest size explained by “this is what we call a mansion in Michigan”) in a tanker labeled “FLINT WATER,” and ends up limply hosing down the driveway from outside the gate (essentially giving the drive a nice wash and watering the governor’s flora—take that).

Moore also made attempted citizen’s arrests (of the Goldman Sachs board) in Capitalism: A Love Story (2009), the film 11/9 resembles even more than it does Fahrenheit 9/11 or his most recent—and most woefully out of touch and ill-conceived—feature, Where to Invade Next (2015). Both feature a blithe and lively recap of recent U.S. presidents, with Reagan taking the brunt of the blame for economic inequality in Capitalism, and Bill Clinton and Obama feeling the wrath in 11/9 for their coziness with the big banks and lobbying interests. In Capitalism, Moore again badgers security guards, like one at the National Archives who declines to answer where words like “money” and “mortgages” are mentioned in the US Constitution. 11/9’s nadir is a segment replacing the audio in footage of Hitler speeches with Trumpisms voiced by an impersonator (it’s not Alec Baldwin–level bad, but it’s bad). In another ass-covering move, Moore includes a Yale professor who explains that while it is imperfect to compare the current situation to Nazi Germany, it is nonetheless useful. The dreadful interlude (which prompted a few walkouts at the New York premiere) is standard Moore, who is tickled by overdubbing and, in Capitalism, included scenes from Jesus of Nazareth (1977), in which Christ informs his disciples about diverse portfolios and the derivative market.

Moore deserves credit for not over-relying on flaccid “Drumpf” and “covfefe” clichés to whip up his fellow-traveling viewership, as he rips into weak Democratic compromises and crucially intones that “Robert Mueller is not going to save you.” But, dispiritingly, 11/9, like Capitalism, attempts the same Hail Mary of optimism at the end with a montage of successfully striking teachers in West Virginia; bravely outspoken Parkland teens; and upstart progressive candidates like New York’s Alexandria Ocasio-Cortez and the ripped and excitable Richard Ojeda, the Democratic nominee for West Virginia's 3rd congressional district in the 2018 general election. It’s momentarily inspiring until you watch Capitalism and see the same labor-organizing montage (at an Illinois windows and doors plant) set to swelling music, and ask what effect the tacked-on “hopeful” final chapters in Moore’s films have had in the last nine years.