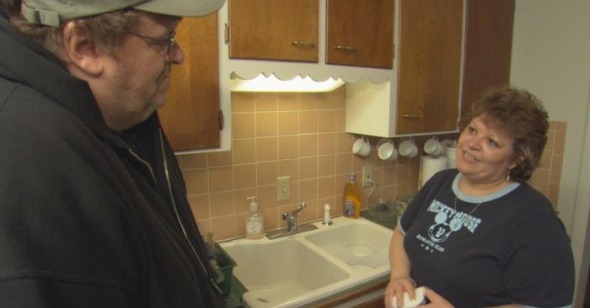 State of the Art
Ohad Landesman on Fahrenheit 9/11

It was difficult to find anything out of the ordinary at the recent Republican National Convention in New York last month. Such careful precalculation leaves little room for spontaneity or surprise, backed as it was by the most intense security the city has ever seen. Nothing, except for that one startling moment in Madison Square Garden in which Senator John McCain took a swipe at filmmaker Michael Moore, who just happened to be sitting in the audience that evening, calling him, in a pure act of demagogy, “a disingenuous filmmaker who would have us believe that Saddam’s Iraq was an oasis of peace, when in fact it was a place of indescribable cruelty, torture chambers, mass graves and prisons that destroyed the lives of the small children inside their walls.” For a second there, when the camera zoomed in on the filmmaker’s face, it was hard not to sense that we were witnessing an unusual and rare incident not only in the history of politics, as some journalists seemed to have noticed, but also of cinema. Not often does a film attain such a prominent status in a political campaign, nor is it at all that common that a politician would so fear the consequences of its distribution that he would panic and argue with its author in a primetime televised moment. And the much too cool, impervious Moore’s reaction? Well, he simply pumped his fists in the air as a response to the accusations and formed an “L” with his fingers to suggest that Bush will lose the elections in November. He preferred, as usual, to be the court jester.

By inscribing himself as the antihero scapegoat of our time and embracing the self-made persona of an incompetent journalist, Moore becomes our everyman, never stopping to disturb and deter skeptical viewers who look for old-fashioned standards of factual accuracy and moral integrity in the documentary form. The polemicist who is never afraid to turn to populism and sophistry in order to make an argument is also, it’s easy to forget, a preacher reaching for your heart rather than your mind.

The unprecedented box-office success of Fahrenheit 9/11 shows, if nothing else, that the film had carved its distinguished place in film history even before its sequel, the November elections, was released. How a film which wears its expiration date on its sleeve will be remembered years from now still remains an open question. A democratic victory would probably increase the likelihood of Fahrenheit 9/11 to be nominated for the best picture Oscar. (Moore had already intentionally missed the deadline for the best documentary nomination, helping us with the categorization issue.) Another Bush term, on the other hand, will make it easier perhaps for some people to consider the film as a mere time capsule. One way or the other, and regardless of what happens in November, the film has already become a unique example of a cultural text which aims at nothing less than creating an immediate and direct change on the course of history by the sheer power and validity of its images. Naturally then, long before it was even released, it had already been certified as a “political hazard,” a demagogic low-blow attack abiding to the same standards it rails against. As soon as Disney decided to walk away from the project, history was in the making.

Is Fahrenheit 9/11 a significant work of art which redefines the benchmarks of the nonfiction film, or merely a transient effective act of oppositional journalism? For one thing, subjectively “biased” documentaries which defy the obsolete criterion of objectivity in nonfiction filmmaking already exist. Errol Morris’s The Thin Blue Line (1988), for example, fabricated images and embraced multiple subjective perspectives in a Rashomon-like manner, setting out to prove that a man was wrongly convicted for murder by a corrupt justice system in Dallas County. Moore, however, does not share with Morris the same patience and restraint, and replaces clinical detachment with an immature point-of-view of a world depicted in black-and-white. All keyed-up and eager to come to terms with his enemy long before the battle even begins, Moore couldn’t care less about factual precision, moral decency, or ethical fairness, and why would he? His effective editing manipulations and stingy one-sided narration support his guerilla tactics and legitimize all means. When those who attack Moore reside on ethical standpoints embedded in the conventional form of the documentary, they may be tagging the film and its rhetoric inaccurately, or simply just asking the wrong questions. Moore’s cinematic essays are not merely populist political manifestos, but also entertaining satires, journalist’s journeys on film which hybridize historical narratives and autobiography.

Providing a cathartic response to a recent wave of paranoia in American filmmaking ((/em>I, Robot; The Manchurian Candidate; and The Bourne Supremacy are only some of the examples that come to mind), Fahrenheit 9/11 replaces red communists with big corporations and corrupted politicians as the newly personified devilish entities. The rhetoric it chooses to embrace in its fight against the evildoers is not so far from neo-journalism, and its bravery is no less remarkable. In the fight against Bush, however, time seems to be running out, and Moore pays no intention whatsoever to hold his ruminations against any vague ethical code of the medium. Univocal argumentation? Emotional manipulation? Charismatic populism? There’s a war on, in case you haven’t heard.

An uneasy relationship has always existed between the documentary and the essay film, and they were often being mistaken for each other. Segueing between different styles, tones, and modes of address, Leftist filmmakers such as Chris Marker, Jean-Luc Godard, Harun Farocki, and Alain Resnais kept themselves busy exploring the confines and contours of the essay film, reconciling personal reflections with the authority of real-life images. The merging of the fictional, nonfictional, and experimental has been used to perform a continual personal journey on film, an attempt to work out a reasoned and univocal line of discourse on a problem. By conforming with the meaning of the original French word essai (or essaier), documentary filmmakers have attempted to explore and to question, always keeping in mind that hitting upon a conclusion is not guaranteed.

Hybridizing interactive and reflexive modes, Fahrenheit 9/11 redefines the essay film and raises skepticism about the extent to which modernist notions of reflection and contemplation are indeed inherent to this form. While other essayists usually employ language to question the truth-value of images, the same juxtaposition works a bit differently for Moore. A subjective truth, disguised as an unquestionable and impenetrable one, is “squeezed” out of the images and formulates a singular possible interpretation of what we see. Whether Moore is dictating to us Bush’s thoughts in the famous kindergarten scene or simply responding didactically to the humiliation footage in Iraq, the rhetoric he employs always enforces the verbal on the visual, never quite leaving any chance for the questions in the essay to remain unresolved and linger after we leave the theater.

In Fahrenheit 9/11 social politics are constantly interwoven with personal history, even if in a much less self-effacing way than in Moore’s previous work. The fact that the object of inquiry is not there to respond to the essayist’s accusations only allows, ironically perhaps, to overemphasize the prominent presence of Moore, who keeps himself busy using his persona for the service of a very efficient rhetorical device, that of comedy. Although we see less of him than what we are usually used to, his spirit constantly hovers conspicuously around the screen and he narrates the events with his usual cynical and stingy trademark humor. When Roger & Me came out, Moore admitted to Harlan Jacobson that he thinks of himself first and foremost as an entertainer, and that “people cannot be galvanized without being allowed to laugh and feel the humanity of it.” Fifteen years later, the Hunter S. Thompson of cinema still employs his body and mind for a good laugh on his critical journey, proving again that accountable journalism and negligent humor go together to serve the rhetorical goals of satirical documentary. Sacrificing historical accuracy for the sake of achieving the unity of an argument has never been a problem for Moore. So why would it bother him when he is in the midst of such highjinks?

Film essays should not be expected to traffic in the same kind of straightforward veracity that we might find in more conventional documentaries. Still, people tend to define Moore as either a political force to be reckoned with or a populist entertainer with no ethical limits, never quite considering that perhaps a merge exists between the two. The comical situations in Fahrenheit 9/11 are not self-congratulatory, and Moore uses them to serve valid political purposes rather than to just pat himself on the back. Watching them, we find ourselves alternating between laughing hysterically and raging furiously. When Moore goes down to Capitol Hill and tries to get various congressmen and senators to enlist their kids in the military, we may very well wonder: is all this pointless and merely exploiting moral superiority? We laugh at those speechless ambushed congressmen because their power is suddenly overturned and ridiculed, and their helplessness amuses us. After this moment, celebrating our own imaginary chance for social anarchy, the courses of action may seem limitless.

For Moore, we must understand, everything is personal, and his enemies are always tangible, never concepts or abstractions (think Roger Smith, Charlton Heston, George Bush). In retrospect, his essays eagerly embrace narrative devices taken from fictional popular cinema. For one thing, his is a character-driven hunt where one man is always on the lookout for another villain. With this kind of setting, the historical narrative is always adjusted to the very familiar conventions of popular fiction and told accordingly. Moore makes an effort to tie up the events of the last four years into a cause-and-effect chronological narrative, a continuing thread stretching from the controversy of the 2000 elections to the invasion of Iraq.

To the critics who say that his films are not documentaries, Moore likes to reply: “I don’t make documentaries, I make movies.” As uncomfortable as it is for some of us, and Moore himself, to admit that he is, in fact, making documentaries, it is an imperative step on the way to acknowledging that cinema is truly constantly evolving. Regardless of where it places us on the current political map, Fahrenheit 9/11 may very well be a necessary wake-up call, a momentary scapegoat which forces us to reconsider some of our own conservative ideas about art.