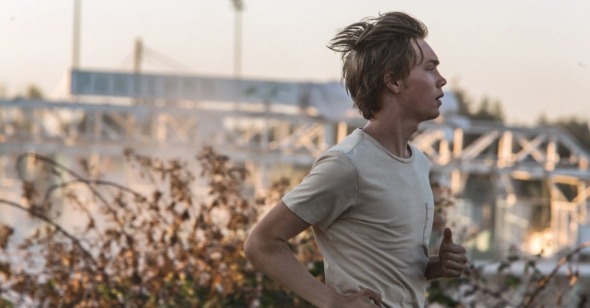 The Loneliness of the Long-Distance Runaway
by Matthew Eng

Early on in Andrew Haigh’s Lean on Pete, Steve Buscemi’s Dell, a foul-mouthed, beer-guzzling race-horse owner, appraises the titular animal, one of his older commodities, for Charlie (Charlie Plummer), a Portland high schooler who’s chanced his way into a part-time gig helping Dell with his mostly low-grade stable of race-horses. “He’s a piece of shit, but he’s good enough for this.” Dell is referring to a sport that Charlie doesn’t particularly know or even come to care for; indeed, there is very little glory to be found in cash-grab, blink-and-miss-it races that are the bread-and-butter of people like Dell and his associate Bonnie (Chloë Sevigny), a journeywoman jockey who isn’t above using an illegal buzzer to give a jolt to one of Dell’s fading nags. Not a particularly special horse, Lean on Pete is hardly a contender, and he may have a stoic beauty, but it’s all too easy to overlook. In Charlie’s kind and observant eyes, however, he comes to mean everything.

The dusty, boisterous, and finally brutal world of racing is just the starting point of Charlie’s journey. Upon learning that Pete’s days are numbered in Dell’s care, Charlie kidnaps the stallion and embarks upon an impetuous, life-saving joyride across state lines. He is seeking both shelter and solace, but also a simple yet elusive thing: connection. This aligns him with all of the protagonists that writer-director Haigh has brought to the big screen in a career that feels increasingly major with each new project. (Haigh’s exceptional, half-hour HBO dramedy Looking was, in similar fashion, an overpoweringly intimate crystallization of throbbing, queer-oriented desire for bedmates and significant others alike.) From the taciturn gay lifeguard lowering his emotional barriers in the face of unexpected love in Weekend to the demoralized wife scoping out the phantom rival for her husband’s heart in 45 Years, Haigh’s characters come up against immense personal hurdles that have been unexpectedly pressed upon them, thus agitating and upending their ostensible complacency. Deadlines loom over each of these characters in the forms of, respectively, a lover’s imminent departure and an impending anniversary party. A similar ticking clock hangs over Charlie, who is in search of an estranged aunt in Wyoming for fraught plot purposes best kept concealed, but Haigh’s latest protagonist is at heart a wanderer, willing to submit to the distractions and deviations of the open road.

The emotional markers of Weekend and 45 Years (i.e. the beginning of a relationship and the likely irreversible demise of a longer-term one) were so explicitly drawn that they gave Haigh plenty of space to linger on certain shared moments—heart-to-hearts, sexual encounters, spontaneous dances—and invest them with nuance. Yet one of the most astute choices Haigh makes in Lean on Pete, which he adapted himself from Willy Vlautin’s 2010 novel of the same name, is to never enunciate a precise reason behind Charlie’s affinity for Pete. In a mid-film interlude so oblique and delicate that it’s practically dreamlike, Haigh allows us to witness Charlie openly confide a great deal of his experiences and apprehensions to his uncomprehending new companion. As Charlie relays scattered stories about his beloved aunt, a long-gone childhood friend, and other adolescent ghosts, the shots of Charlie and Pete, and therefore the spoken recollections themselves, fade into one another through a series of haunting dissolves. The night wind that rustles through the deserted plains is kept as muted as Plummer’s even-toned speech. This canny, goosebump-raising effect, in a typically dense and enveloping soundscape, lends an air of secrecy to monologues that could have been little more than convenient dramaturgical stopgaps of relationship-deepening. As their passage progresses and intensifies, their bond remains a tacit one, no less moving for its bold inscrutability.

Despite the urgency of Charlie’s circumstances, Haigh unfolds his story at a purposely patient pace that allows us to bask in grace notes. Each one helps to construct a complete world around our unceasingly centralized hero, from the restless physical quirks of his jocular but loving father (Travis Fimmel) to the chance, casual, and entirely vocalized generosity of an unseen diner waitress who is taken advantage of by a starving and cash-strapped Charlie. Haigh isn’t exactly indulgent in Lean on Pete, but he remain splenty happy to draw out fairly nonessential scenes, not so much to indulge his actors as to maintain a mood, heighten a relationship, or gain a new insight. An extended lunchtime conversation between Dell and Charlie about the latter’s ravenous impropriety offers up a lighter and more generous side of the enterprising, no-guff businessman that Buscemi frequently plays; his gentle chastisements betray an undeniable affection for the boy, but the pithiness of Buscemi’s interpretation prevents the character from becoming anything as clichéd as a good-hearted foil. Two-shot exchanges between Charlie and flawed parental figures both biological and substitutional comprise a sizable portion of the film’s first act, radiating an feeling of offhanded comfort among the characters within their domestic and workplace milieus—Haigh eventually disrupts this, for despite being a filmmaker prone to instances of quiet contemplation, he’s never content to put us at ease for too long.

Lean on Pete is punctuated by three startlingly violent acts that Haigh captures in virtually unbroken shots; the first two are tragic setbacks, the final one a disquieting, jaw-dropping deviation of Charlie’s character that finds him behaving with the same unsparing cruelty that he had before only witnessed. It speaks to Haigh’s expert discernment that he rarely submits to bluntly verbalizing Charlie’s responses to these traumatic blows. At times, Haigh’s dialogue is prosaic to the point of barely mattering, but it shifts our focus to where it should be, on the impressionistic images (shot by Danish DP and first-time Haigh collaborator Magnus Nordenhof Jønck) and the striking array of faces and bodies that drift through them at various junctures. Haigh is that rare director who understands that the flesh-and-blood artistry of a virtuosic actor can tell us more about a character’s inner state than even the most evocative words.

Plummer, just 17 at the time of production, is often tasked with silently processing the raw shock of Charlie’s loss on his wiry runner’s body, which appears to carry the entire universe on its slouching shoulders and bent back. The young actor, who recently provided Ridley Scott’s stultifying All the Money in the World with its only detectable trace of credible humanity, exudes ease in front of the camera and alongside more experienced thespians. Plummer’s is a near-perfect characterization whose remarkable roundedness is achieved, in equal measure, through moments of breathtaking sensitivity and the actor’s rare ability to seize even the most potentially negligible bits of behavior and use them to unearth new facets of his closely guarded protagonist. He saves certain expressions and reactions for our eyes only, like the warm grin he emits when Dell hands him more money than he anticipated after his first day on the job. At other times, the actor’s longing gaze, regularly cast with such rapt adoration on Pete, is the film’s emotional compass.

Haigh’s empathetic decision to tightly adhere to Charlie’s point of view offers an immediacy that recalls Robbie Ryan’s attachment to Andrea Arnold’s hardscrabble heroines. This choice only makes it that much more absorbing when there is some spatial distance allowed in the frame. Jønck, working in vista-ready 1.85:1 widescreen, has crafted some marvelous images of the Pacific Northwest that pay ravishing homage to the natural grandeur of the dry land traversed by Charlie and Pete, from its skyward-stretching mountains to its endless golden sunsets. In one indelible long shot, Jønck photographs our hero and his horse stoically wandering through an expansive field of beautiful, identical green flora that lightly flutter in the wind, encapsulating the arduousness of this pilgrimage but also the poignant notion that, at this moment and this moment only, the land belongs to no one but them.

By the time Lean on Pete finishes, with a road-scarred Charlie finally finding a place to rest his weary head, Haigh has conjured an air of rarefied pathos that has seldom been imbued with such wistfulness in tales of gritty adolescence. Although unmistakably occurring in the here and now of boyhood, Haigh’s film aches with the pangs of grown-up reminiscence. This aligns it with coming-of-age stories as disparate but equally deep in tender feeling as How Green Was My Valley, Pather Panchali, The 400 Blows, and The Long Day Closes, films that coherently relate the exploits of youth while refracting them through a window of accrued wisdom that only time can open and illuminate. Lean on Pete mirrors these classics while resembling precious else in contemporary American cinema. Haigh has made yet another film that emerges with the closeness and quiet concentration of a whispered secret.