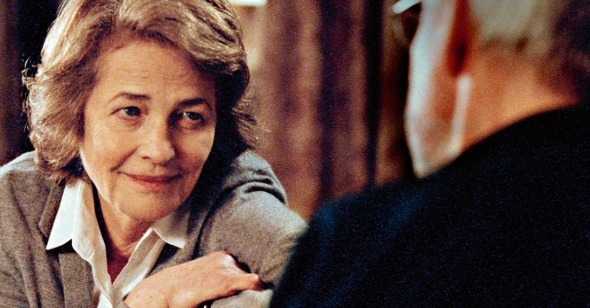 There is a tantalizing irony at the heart of Andrew Haigh’s 45 Years, one that lends the director’s third feature a maddeningly mysterious appeal. The film is principally a two-hander of real dramatic elegance, showcasing a couple of elderly actors of fairly untouchable distinction (Charlotte Rampling and Tom Courtenay) at their most compellingly ordinary. Such is the primacy of their performances that this depiction of a retired couple preparing an odd-numbered wedding anniversary near their home in the Norfolk Broads could have been played on the radio—or as a one-act play on a barren stage—and would still engross from the very first scene. And yet the central conceit of 45 Years—the corpse of the husband’s young ex-lover, who died before he met his wife, is de-frigorified after fifty years buried in ice—is so contrived, so literary, so grotesquely artificial, that by rights it ought to topple the film on its axis and bring its whole crypto-realist edifice crashing to the ground. The fact that it doesn’t is not only a testament to the actors’ craft but also a strong indication of the career that awaits Haigh: no longer callow (as one may have felt after his first film, 2009’s Greek Pete) nor a promising talent (after 2011’s Weekend), with 45 Years he announces himself as a fully-fledged British auteur and chronicler of the intimate. The reason the ice-woman construct doesn’t derail the film is, in the end, quite simple: this genteel middle-class couple’s problems lurk and breathe beneath the surface of their marriage and for the majority of such couples that is where they will stay, without a deus ex machina to disinter them. The universality and truthfulness with which this is all depicted is so powerful that even if a Martian spaceship had landed in their vegetable patch, the consequences on the couple’s marriage would still have ended up feeling entirely plausible.

What follows this cryogenic discovery is, in a sense, a suspense thriller, as a visibly shaken Courtenay begins to exhibit an emotional response on a level that one strongly suspects outdoes anything he’s expressed in his forty-five years of marriage to Rampling (he appears to be keen to celebrate a fiftieth anniversary—of the last time he saw his ex-lover alive). We witness Rampling’s defense mechanisms against the repercussions of his behavior, torn between the picture she has painted for herself of their marriage and the feelings of jealousy and fear (of not knowing) that she herself cannot suppress. The plot builds inexorably toward the anniversary reception they are throwing, whereat one instinctively feels certain conclusions will be drawn for good.

In one respect, this study of the longevity of love is the polar opposite of the excitingly frank Weekend, which told the story of a whirlwind, two-day relationship doomed from the outset by the pre-planned departure of one of its protagonists. But in so many ways 45 Years is firmly—and exhilaratingly—occupying the same territory. As a director and writer, Haigh heavily uses the concept of a blank canvas: the town of Nottingham (Weekend) and the countryside of Norfolk (45 Years) are far from featureless, but are drained of color and presented as backdrops—bare spaces, in a sense—that will not interfere with the characters’ lives in any material way. Instead they bring the actors into stark relief. Haigh the storyteller also views and presents his characters using a similar idea but on a micro level, teaching us from the outset only what each character has painted onto his or her own canvas. The French philosopher Denis Diderot wrote of “erecting a statue in our own image inside ourselves . . . and we spend our lives engaged in the effort to make ourselves into its likeness.” Glen (Chris New) in Weekend, says: “When you first sleep with someone you don’t know, you become this blank canvas and you project who you want to be onto it: a gap opens up between what you want and who you are.” Just as vulnerable, semi-closeted gay men in clubs might need to project outwardly something far removed from what’s going on inside, so do retired provincial Classics teachers (Rampling’s character opens 45 Years with a delicious piece of superficial small-talk with one of her ex-pupils, working as a postman), and so, of course, do all of us. The essence of Haigh’s realism is that he presents his characters to the audience exactly as they would present themselves. Only later, as he begins to decorticate their personalities through his increasingly intimate dramatization of their relationships, will they reveal themselves as they really are.

Haigh once again creates for the audience a primary point of contact (Rampling) and uses a secondary protagonist (Courtenay) to work off them. Rampling’s equivalent in Weekend was Tom Cullen’s Russell, outwardly a troubled individual, uncomfortable in his sexuality, faced with New’s brashly confident interlocutor. Rampling in 45 Years comes across as the firm hand on the tiller of the couple’s marriage, organizing and responding serenely while man-child Courtenay dodders about without great purpose, failing to make headway in his attempts to learn philosophy (a half-baked bid to improve himself, in the light of Rampling’s palpable intellectual superiority). And then, in each case, something comes along to knock the primary protagonist’s life out of kilter: in Weekend the hook-up with Glen, in 45 Years the discovery in the ice. As Weekend unfolds, it becomes clear to the audience that Russell is in fact much more level-headed than Glen: he’s very comfortable with his own discomfort, the parameters of which he can control—Glen is revealed to be a volatile basket-case by comparison. In 45 Years, Courtenay’s character develops a sense of purpose and—however cruel—a real decisiveness, while a devoted Rampling is rocked by squalls of confusion and doubt.

Haigh’s direction ensures that while a full appreciation of the characters’ inner turmoil needs to be a work in progress, the quotidian surface intimacy of their lives is immediate—and draws us straight in. We witness characters in the home: Cullen’s penis and upper bum crack are briefly glimpsed in Weekend as he prepares for his night out; Rampling’s pile of mail and “country kitchen” crockery on the draining board, as she finishes the tiny bit of washing up required for two, are no less evocative. Haigh’s writer’s eye for just the right sort of detail means that very little paint is needed to fill the canvas—in Weekend, Cullen made coffee for two the morning after his conquest, but froze in the doorway rather than take it to the man he’d just spent the night with; in 45 Years, Rampling tinkles briefly at the piano when left alone with her thoughts, hinting at her own potential lost opportunity while she copes with her husband’s apparent embracing of his. Haigh’s use of long takes with a static camera (prominent in Weekend but used more frequently here) is most demonstrative during protracted two-way conversations where only one of the characters remains in the frame. He deliberately eschews shot/reverse shot, giving the audience a sense of eavesdropping on a conversation that’s really happening, instead of having it played to them. This technique, familiar in realist cinema, ties in with that aspect of 45 Years which has rightly won the most plaudits: the execution of Rampling and Courtenay as the endangered couple.

The contrasting styles of their acting—Courtenay more ludic and indulgent; Rampling subtler and seemingly more vulnerable—are consolidated by Haigh’s decision not to attempt to disassociate the actors’ own personalities from those of their characters. More than simple casting ingenuity, the performance process required a level of personal engagement by the actors (both of them long-married) that can be sensed by the audience during the film and which causes 45 Years to start to resemble something greater still. In the press the pair did for the film, they continued to rebound charmingly, but occasionally awkwardly, off one another, as if the shooting process had not been an unmitigated joy. A highlight—not to say a climax—of this Pialatian naturalness comes in the film’s gracefully crafted sex scene, prior to which a cocksure, Y-fronted Courtenay beats his chest while Rampling (a sex symbol if ever there was one) fights off her manifold insecurities. According to Rampling, Courtenay could not wait to film these sequences and liked nothing more than parading in his tighty-whities: a dutiful Rampling, for her part, loathed it. (It is fun to think back to the very naughty Weekend and New’s response to Cullen’s saying he’d rather not talk dirty during sex: “Do you think talking about sex is dirty?”)

If Weekend was a brazenly gay film for straight audiences, Haigh’s decision to write his follow-up about a comfortably off, straight middle-class couple is an indicator of his desire to work with catholic themes and make his voice more widely heard. There is nothing niche about his cinema—it speaks to anyone who has concealed, repressed, or even felt, anything. If Carol could be called 2015’s Brief Encounter, then 45 Years is by rights its Journey to Italy. Haigh’s laser-sharp observation, detailing, and narrative progression reach their collective apotheosis in the final shot: a gesture, scored by the Platters’ “Smoke Gets In Your Eyes” and perceptible only to the audience, as Rampling herself is frozen to the spot. The forty-five years that have gone before are frozen with her, along with all the investment she has made. We know not what precisely will ensue, but it’s a moment as dramatically devastating in itself as any unequivocal conclusion to this story could ever be.