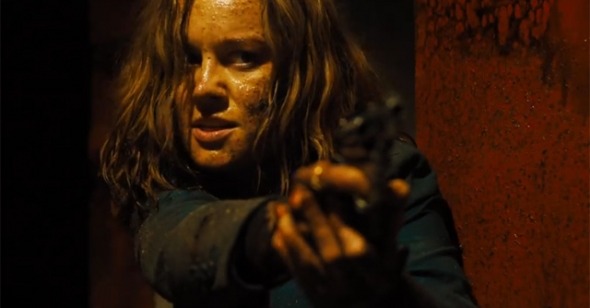 It’s been 25 years since the release of Reservoir Dogs, but in Ben Wheatley’s latest film it’s 1992 all over again. The nasty violence, articulate profanity, and ironic song cues (here it’s John Denver’s sappy “Annie’s Song” that accompanies some contrasting tension) are back, but something’s off. In films like Kill List and his alarming and funny Bonnie and Clyde riff, Sightseers, Wheatley’s juvenile obsession with violence was coupled with a singular, quirky (albeit dark) voice. Here, the dominant tone is cacophony—the shrieking, curse-riddled din of gunfire and a warehouse full of criminals spitting lines like, “Sympathy’s in the dictionary between shit and syphilis.” But who’s really been asking for this journey back to 1992? Free Fire is more often reminiscent of the cash-in Tarantino-esque titles that invaded video stores after Pulp Fiction, time capsules like 2 Days in the Valley, City of Industry, or 8 Heads in a Duffel Bag, rather than being a new or exciting thing of its own. A wallow in aggro unpleasantness and dated irony, the film plays like Wheatley’s big middle finger to viewers.

Like Wheatley’s High-Rise and the similarly chatty The Hateful Eight, Free Fire takes place in one location (save for an establishing aerial view opening credits drive with Sussex doubling as Boston), the warehouse where a motley assemblage of seedy types have gathered to exchange a truck full of automatic weapons for a briefcase of cash. Though the surplus of Chekhov’s guns (offloaded in the first act and certain to fire later) aren’t what lead buyer and IRA representative Chris (Cillian Murphy) asked for, he accepts them anyway after emptying a magazine into a wall with satisfaction. The tense moments that precede the inevitable shitshow are the film’s best, with the prissy, Savile Row–clad Vernon (Sharlto Copley) providing much of the colorful banter, while Wheatley regular Michael Smiley is a seething, mostly quiet counterpoint. Relations sour when one guy from the selling crew, Harry (Jack Reynor), recognizes Stevo (Sam Riley) as the guy he beat up the previous night for grievously insulting Harry’s female cousin. Once politesse is shattered, it never returns, and the film becomes an extended shootout, with each character sustaining a comically high number of bullet grazes and the occasional on-target headshot. Wheatley has a strong command of blocking and space, and he is clearly having fun moving his characters around the chessboard of a warehouse and methodically eliminating them, Ten Little Indians-style. Setting up the endless squibs and movie-gore was no doubt a headache and challenge in itself, but you get the sense that this film was probably a lot more fun to make than it is to watch.

The general macho bluster (sample dialogue: “She looks like a fucking cock jockey”) is leavened somewhat by the presence of Brie Larson as intermediary Justine, who gets called “a few pounds” overweight early on and sneers “Ugh, men,” when one opponent stubbornly refuses to die at one point, an ostensible laugh line and “feminist” fist-pump moment. The actress’s 2016 coronation by the Academy makes Larson the most famous person here, though she may not be suited for action, as her gun-wielding gravitas is unconvincing. The acting is otherwise uniformly fine despite some wonky Yankee accents, even though all are just performing a different register of scumbag. Facial hair is abundant in this vaguely 1970s-looking period piece, with Armie Hammer looking the best in beard, gray blazer, and black turtleneck. Riley is a standout as the volatile Stevo, whose wiry, greasy nervousness is similar to what Scoot McNairy was up to in Killing Them Softly, a “spiritual” predecessor.

The scare quotes are there because Wheatley has made a career out of portraits of nihilism and soullessness, and Free Fire, though more outwardly comic than High-Rise, A Field in England, or his precedent-setting debut Down Terrace, is no exception. In Sightseers, the ample violence was disturbing because it was so seemingly unmotivated; in Free Fire, it’s played strictly for yuks—you can almost hear Wheatley sniggering offscreen at all of these idiots getting shot up. The hyper-frenzied but eventually wearying and dull folly High-Rise (also 1970s-set and a purported companion piece to Free Fire) was a needless over-egging of J.G. Ballard’s classic, compact novel of deadening modernization, a novel the very economy of which added to its thesis and impact. And yet for all of its florid, assaultive posturing, High-Rise, like A Field in England, was still an attempt at branching out and trying something different than his very similarly small, modulated, and mean first few films. While it’s true that there is nothing else in Wheatley’s resume exactly like Free Fire, in its resurrection of rightly buried mid-90s amoral, violent action, Free Fire is strictly regressive.