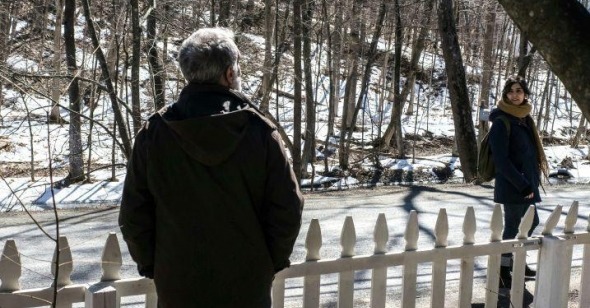 ‚ÄúGo back to sleep and believe this to have been just a dream,‚Äù theater director, translator, and Buenos Aires-to-NYC transplant Camilla (Agustina Mu√±oz) advises her now-former lover, Gregg (Dustin Guy Defa) midway through Mat√≠as Pi√±eiro‚Äôs Hermia & Helena. Though her command interrupts a prosaic date in the park (Brooklyn‚Äôs Fort Greene, per the movie‚Äôs obsessive specification of urban space), it follows two successive, almost dueling dream sequences. The first, a film-within-a-film made by Gregg, is a throwback experimental short tweaking the opening monologue of Hitchcock‚Äôs Rebecca: ‚ÄúI dreamed I went south again.‚Äù The latter is dreamt in a more literal sense by Camilla as she dozes in Gregg‚Äôs arms. In it, Shakespeare‚Äôs words are superimposed upon a reverse negative close-up of the sleeper, and recited in both the original English and Camilla‚Äôs Spanish translation, which overlap and reverberate with incantatory intensity. Rudely awakened by a call from her current paramour, Camilla quits Gregg abruptly with her gnomic send-off, leaving him in an ambiguous daze.

Hermia & Helena is the newest installment in Pi√±eiro‚Äôs continuing transposition of Shakespeare‚Äôs comedies onto the lives of his contemporaries, following Viola and The Princess of France, his riffs on Twelfth Night and Love‚Äôs Labor‚Äôs Lost, respectively. This time out, the director and his troupe of recurring performers and collaborators are working from A Midsummer Night‚Äôs Dream, and Camilla‚Äôs instruction recalls Puck at that play‚Äôs conclusion: ‚ÄúIf we shadows have offended / Think but this and all is mended / That you have but slumbered here / While these visions did appear.‚Äù In so doing, Pi√±eiro relates Camilla‚Äôs translation‚Äîand by extension his own project of interpolation‚Äîto the play‚Äôs focus on dreaming and boundary crossing. While the New York‚Äìset Hermia & Helena carries on the alternately fastidious and freewheeling sensibility of the director‚Äôs previous Shakespeare films, it‚Äôs the first to be set outside Argentina, as well as the only one thus far to engage with the Bard‚Äôs work in English.

Camilla arrives in New York for a fellowship position vacated by her friend Carmen (Maria Villar), in doing so traverses borders both national and personal. Although the relationship between the two women is kept teasingly indistinct, Camilla cites the urge to follow in her compatriot‚Äôs footsteps as reason for accepting the fellowship. For her part, Carmen is aloof and icy, with Villar cast almost against type after playing dreamy and vulnerable in Viola and The Princess of France, respectively. Moving into her friend‚Äôs old Chinatown apartment, Camilla tentatively experiments with a variety of relationships and faintly speculates on the broader arc of her life, though things remain sufficiently loose and improvisational that no one would accuse her of anything so clich√© as ‚Äúfinding herself in the city.‚Äù

In making New York his own, Pi√±eiro focuses on a narrow subset of the city, an intensely localized sliver that‚Äôs also global in nature. The cultural peculiarities of New Yorkers, a favorite subject of American pop culture, are passed over unceremoniously. Describing New York‚Äôs male offerings, Carmen nonchalantly likens them to the Buenos Aires product: ‚ÄúYou‚Äôll see he‚Äôs like the boys here,‚Äù she says of Lukas (Keith Poulson), Camilla‚Äôs eventual love interest. Instead, Pi√±eiro represents an already internationalized smattering of young people, who arrive equipped with a shared pool of cultural norms and referents. To this end, the cast is populated by a vibrant group of figures recognizable from the international film festival circuit, including filmmaker Defa, actor Poulson, and critic/writer/director Dan Sallitt, with French filmmaker and actress Mati Diop gamely dropping in from Paris. If Pi√±eiro‚Äôs Buenos Aires comes off as a big, amorous theater troupe, his New York is idealized as a meeting place for low-key creative types from the world over. The action mainly revolves around lower Manhattan‚Äôs Columbus Park, a pleasant hub for the present-day city‚Äôs Chinese community and the former site of Five Points, an infamously brutal gangland battleground but also a near mythic presence in the city‚Äôs complex, multicultural history.

Yet if Buenos Aires and New York are shown to be culturally contiguous and largely interchangeable boys-wise, Pi√±eiro and his trusted cinematographer Fernando Lockett take pains to demarcate them visually and dramatically, starting with seasonal difference between the Northern and Southern Hemispheres. Argentina is warm and colorful, offering the precious freedom of movement that comes with being able to wear t-shirts and light dresses into the night. New York, on the other hand, is cast in somber blue tones, its denizens moving from one place to the next with the grim expediency of the chilly. This contrast carries over into Carmen and Camilla‚Äôs dual social words; Buenos Aires is inhabited by a tight-knit group of like-minded young folks, while Camilla experiences New York as a lonely expat, forging relationships one at a time, largely through awkward, apartment-bound t√™te-√°-t√™tes.

These relationships make up the movie‚Äôs narrative backbone, each set apart by a chapter title identifying the two players. Pi√±eiro intercuts these with Camilla‚Äôs last day in Buenos Aires, identified by title cards‚ÄîOne Month Earlier, Two Months Earlier, etc.‚Äîthat also mark the passing of time. These rather overt signals of narrative structure draw attention to the way Camilla‚Äôs relationships materialize and evaporate (Pi√±eiro‚Äôs characters have long been defined by promiscuity of a not exclusively but certainly quite sexual sort, which is if anything heightened by the source play), but Pi√±eiro‚Äôs tricky plotting goes above and beyond what is strictly demanded by the story to offer up the pleasures of storytelling for their own sake. Likewise, the director builds little motifs out of gifts, street signs, and maps. The overall effect is a sort of arbitrary specificity, tracking an apparently fungible route through the protagonist‚Äôs very uncertain journey through a strange land. Within this landscape, A Midsummer Night‚Äôs Dream becomes another in a series of moving pieces. Despite the playful, self-aware hubris of Pi√±eiro‚Äôs overall project, tackling not just one of Shakespeare‚Äôs comedies but the lot of them, the plays are thoroughly subsumed into the heady thrill of narration that characterizes the director‚Äôs work.

Another telling point of inflection is the movie‚Äôs dedication to the late Setsuko Hara, best known for her work in Ozu‚Äôs immortal Noriko trilogy of Late Spring, Early Summer, and Tokyo Story. These piercing and ineffably beautiful films are among the finest ever made about maturation, opening up pivotal moments in the communal life script as if from within. Conversely, one of the true pleasures of Pi√±eiro‚Äôs work is his admirable abstention from not only the conventions but also, seemingly, the concerns of the coming-of-age narrative. The moments of youth are allowed to stand on their own, with minimal pressure to amount to anything whatsoever. Yet Hermia & Helena offers a tentative glimpse beyond the myopia of youth in a third act encounter between Camilla and Horace, the birth father she‚Äôs never met, played by Sallitt with understated excellence. A mix-up leads to Camilla having to kill time in Horace‚Äôs house before he arrives, and through expert pacing Pi√±eiro builds a quirky sort of suspense. Their long-awaited meeting, conducted as a kind of interview, plays out as a flirtation of a wholly expected sort, accomplishing with stillness what the virtuosic high points of Viola and The Princess of France did with highly composed movement. If Pi√±eiro intends to keep the band together even as they age out of charmed youth, this sequence is an encouraging sign.