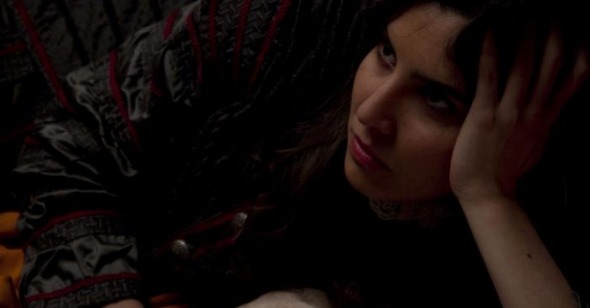 Such Stuff as Dreams Are Made On
Adam Nayman on Viola

In trying to choose a movie for this symposium, I flirted with several titles that have already stood the decennial test of time before settling on something that hasn’t yet been released commercially. This is partially because I’m leery of parroting received wisdom, but also because I want to show the importance of remaining wide awake to new experiences. Which is funny, because the first time I saw Viola—a film I’ve now watched three times—I was with a friend who fell asleep about halfway through the movie. And because I noticed her nodding off out of the corner of my eye, I only later realized that I missed a shot of one of the characters doing the exact same thing—quietly conking out while her companion is lost in a book. The young woman in question is being filmed in side profile, but her face is turned away from the camera, so the only way to notice that she’s succumbed to fatigue is the flutter of her eyelashes peeking out over her cheek. It is, quite literally, a blink-and-miss it moment.

It’s also the prelude to one of the most quietly amazing dream sequences I’ve ever seen in a movie, even if on that first viewing I didn’t realize that it even was a dream sequence at all. I thought that Viola (Maria Villar) was awake as she waited in the passenger seat of a stranger’s car for a mutual acquaintance to return for a meeting, and that the arrival of a third young woman who knew them both was just another of the film’s serendipitous coincidences: that this luminous newcomer had been passing by, seen her friends through the windshield, and climbed inside to get out of the rain. And then I realized that when the scene started, it had been bathed in afternoon sunlight and there hadn’t been a cloud in the sky. Now it was pouring and the wind was howling. Does the weather really change so quickly in Buenos Aires? What was going on here?

This sensation of pleasant confusion recurs throughout Viola, which might be described as an ensemble romantic comedy but at the same time doesn’t seem beholden to any genre. Argentinean director Matías Piñeiro’s sophomore feature dares to disorient its audience from the first scene onward. But it’s not an obtuse film. Although it is filled with mysteries, it is not asking to be decoded. Instead, Viola invites us to submit to its pleasures, which are ample and ultimately very simple. In lieu of stylistic fireworks or some sort of grand thesis statement, Piñeiro offers us nothing less than a window on extreme beauty, which radiates through the faces of his actresses and the Shakespeare plays that they intermittently recite in a variety of contexts: as dialogue in stage productions, as lines being rehearsed in private, and as words interpolated into everyday conversation.

“You are out of your text,” chides Sabrina (Elisa Carricajo) during a stage performance: she’s in character as Olivia from Twelfth Night, but the line also speaks to the larger game being played throughout Viola, onscreen and off. Sabrina is part of an all-female Shakespeare troupe that plays fast and loose with the Bard’s work, mixing and matching selections from several of his comedies until a new hybrid text has been created. This is also Piñeiro’s M.O.: Viola is the second in a series of films inspired by and named for Shakespearean heroines (I have not seen its predecessor, Rosalinda). The degree of difficulty for filmmakers and characters both is heightened by the fact that they’re translating centuries-old English iambic pentameter into Spanish without compromising its rhythm or meter.

Even if you’re aware of the conceit, which isn’t explained until about midway through the film, it can be hard to tell (even for English majors) exactly where the different plays have been sutured together. This sense of slippage is mirrored in the way that Shakespeare’s language and dramatic style start to bleed into the women’s lives offstage as well: concerned about Sabrina’s recent breakup with her longtime boyfriend, her cast mate Cecilia (Agustina Munoz) hatches a plan to “seduce” her friend in order to teach her a lesson about desire; when she outlines her plan to the other performers, she speaks in rhyming couplets, and it’s not clear whether or not she’s in character. When she gets to Sabrina’s apartment, she tells her she wants to run lines, which they do over and over again in a blissful loop of passionate entreaties and deflections until the scene they’re “rehearsing” takes on a life of its own, not unlike Betty Elms’s audition in Mulholland Drive, but with the latent desperation replaced by a sense of playfulness.

The direction and acting in this sequence are simply astonishing. The camera stays attached to the two women as they move through the apartment, never intruding on their personal space even as they get very close together and remaining attuned to the smallest changes of expression on their faces. The vibe is tremendously sexy, which doesn’t obviate its more intellectual aspects, as the viewer is left to puzzle over what it means to be “in character.” Does that designation refer to the characters in the scene—one of whom is masquerading as somebody else—or to Cecilia and Sabrina, who are play-acting, or to the actual actresses, who are the ultimate play-actors in this occasion. It’s enough to make one’s head spin, and the tension is ratcheted up by the soundtrack: Sabrina’s cell phone keeps ringing, and then her doorbell buzzes, and then there’s a knock at the door.

That the ladies remain intent on their text until the moment that Piñeiro finally cuts away could be a comment on the entrancing power of classical drama, but Viola is hardly backwards-looking. Its loveliest aspect may be the way it equivocates between the first set of characters’ devotion to Shakespeare and the more modern preoccupations of the other key players. The midfilm introduction of Viola, who is not an actress, would seem to reset the movie’s narrative, but it actually enlarges it. Viola and her boyfriend Javier (Esteban Bigliardi) have a home business pirating and distributing DVDs; we never learn what the movies are, but we can infer that they’re probably independent or art-house features (their company is called “Metropolis” and the envelopes are hand-stamped with a Langian “M.”) No less than the Shakespeare troupe, Viola and Javier are culture warriors, and the portrait that emerges of Buenos Aires as a sunny little village populated by cinephiles, performers, and musicians is affirmative in the extreme—and far removed from the gloomier, more isolated visions of the charter members of the Argentine New Wave, such as Lisandro Alonso, Pablo Trapero, and Lucrecia Martel.

It’s possible that Piñeiro sees himself as working at the margins of a movement that was itself already set apart from the country’s cinematic mainstream, but Viola is too modest and self-contained to be any kind of salvo against national film culture. This is not to say that it’s solipsistic, however. Piñeiro’s characters are self-involved to the extent that their primary topics of conversation are their relationships (to art and to their lovers), but they remain open to each other and to the world. This is a film where people really seem to be listening to each other. In the dream sequence, Viola is rapt while Cecilia and the beautiful interloper, Ruth (Laura Peredes), offer her heartfelt (if at times slightly loopy) advice about Javier and whether the coziness of their cohabitation is a safe haven or a trap (“Do you have a relationship or a routine?”). Since Viola is actually asleep at this point, she might be talking to herself in the voices of two other women. That they also invite her to join their troupe could be read as a sign that Viola secretly wants to participate even more directly in the artistic process—to go from being a delivery girl to an authentic Shakesperean heroine like her namesake.

Not much happens after Viola wakes us from her subconscious pep talk: she returns home to Javier and the movie gently peters out (it’s barely an hour long, which is refreshing in and of itself). Yet even this dissolution is gracefully achieved, Viola doesn’t draw any significant conclusions about its characters because their lives are still very much in flux. The contrast between the uncertainty of these beautiful, talented, desirous, and insecure young men and (mostly) women and the eternal sturdiness of the plays they perform is clear, but even that boundary is eventually collapsed. Without trivializing Shakespeare’s work or aggrandizing his own efforts, Piñeiro rather audaciously places them on the same continuum. In the same way that Viola carves out a niche for the classics in a contemporary milieu, it also argues that its characters’ dreams are made of the same stuff as the ones brought to life by history’s greatest playwright.

“Twill endure wind and weather,” one of Viola’s performers assures another. The line is about Olivia, but it transcends Twelfth Night. It also describes its author, its actress, and, hopefully, the deceptively minor and surpassingly wonderful movie that mobilizes it as a kind of mantra.